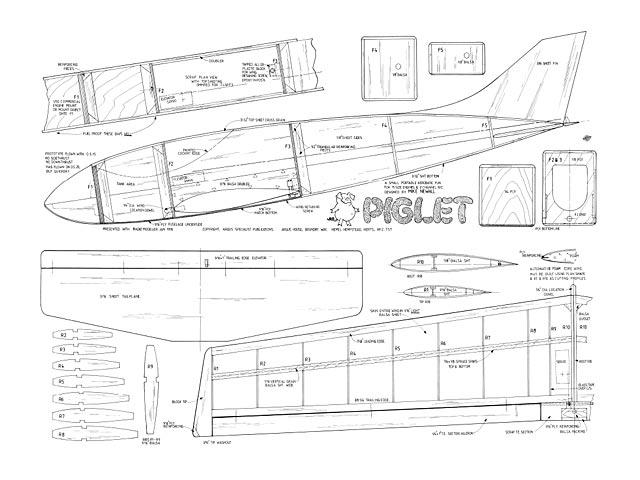 General: Piglet was originally designed to be a small, very portable acrobatic fun model which could be built in a week for under £15. Two prototypes proved it could be done and both flew very well on OS 15s. Minor alterations have been added to produce its current form which can be built with either foam or built-up wings. I have built both and there is not a lot between them.

Fuselage: Start by cutting the sides then marking carefully the former positions. As the sides are parallel one side can be built on the bench then, after all formers and the tank have been installed, the other side can be glued on. I use cyano nearly exclusively and you can produce most of the fuselage in an evening.

Don't forget to route the snake for the elevator before adding the top and bottom sheeting. All thrustlines and incidences are zero, even a good 20 powered version tracks vertically with no problems. Either a ply plate or nylon mount can be used for the motor, the design is so straightforward you can adopt your own personal styles in most areas without any problems. Club members have built half a dozen slightly different versions - all flew well.

Tailplane: Choose good even wood, the stabilizer is quite large and requires to be fairly rigid, the nose is long enough to prevent tail heaviness being a problem. I have not found a rudder to be necessary but I am sure there will be a few sprouting here and there; it will allow spinning and tight snap rolls but I haven't felt the need.

Wings: The foam/veneer version is very straightforward. Simply produce the ply templates and either cut it yourself or send away to any of the good wing producers shown in the magazine. Pleae ensure you make good ply templates..." 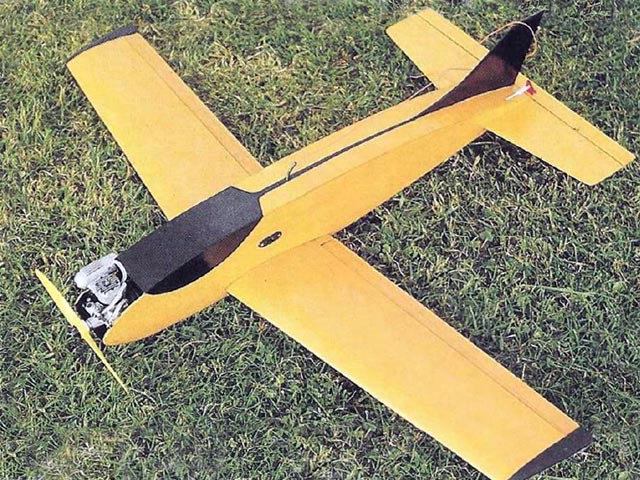