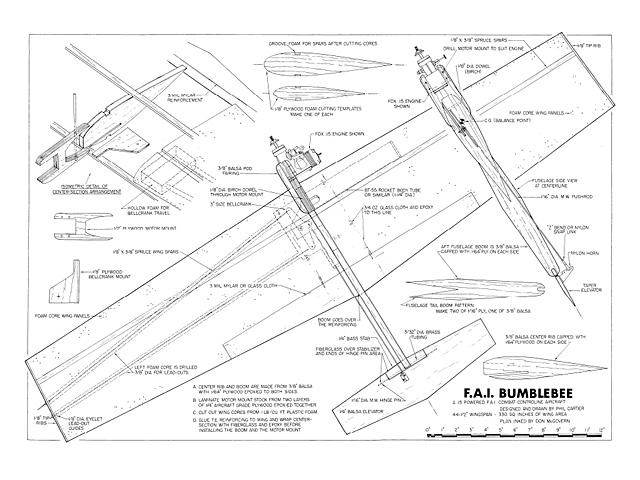 Quote: "An FAI combat ship with a wicked sting. Bumblebee, by Phil Cartier.

It's no secret, the word is out - FAI Combat is fun. After seven years it has finally developed into its own unique event. It's not Fast, although the planes are fast and quick. It takes four minutes of flying to win and there are no easy kills, but it is not Slow. It's FAI.

Two team trials and a World Championships have come and gone in the last three years. This forced a lot of model development into a fairly short time, with all the top fliers and designers working overtime. The formula for a winning design has stabilized pretty quickly. Level flight speeds are right under 90 mph with a streamer. The airplanes rapidly grew to over 360 square inches, with big FAI ships running up to 430 squares. A small one, with only 330 or so, was a typical Fast Combat size a few years ago. Weights run between 13 and 15 ounces. The plane must be able to fly for four minutes. The downtime penalty is too costly to risk for a few inches of turning radius or a mile or so of speed. A typical Fox burns slightly over an ounce a minute of 50% brew. The other engines use a bit less fuel and only need 10-30% nitro.

The Bumblebee FAI is the latest of my FAI designs, and is a compromise between a lot of conflicting requirements. Here is what I compromised in this design, and why.

Size vs Speed: A bigger plane can always turn more tightly because it has more area to lift each ounce of weight. The Bumblebee carries 22 square inches per ounce of flying weight - which is a bit on the low side, but I wanted to use a proven wing and a force setup that I knew worked. The turns can be improved markedly by building to a 13-ounce flying weight.

Weight vs Strength: Stronger is heavier, which is bad. Lighter is weaker, which is bad if you go too far. The classic aeronautic dictum is: 'Build in lots of lightness, then beef it up where it breaks until it just holds together.' This is great for maximum performance until a ham-handed pitman grabs the plane in the wrong spot. The Bumblebee is built like a brick outhouse. If you mess up in the air and lose, club your opponent with it after the match. Later I will tell you where to save this 'extra' weight - but if you go the superlight route, just be sure to land gently.

General layout: I like my planes to be quick through the maneuvers and have a nice, stable feel to the controls. The relatively long span gives a reasonable span loading to reduce the speed loss..." 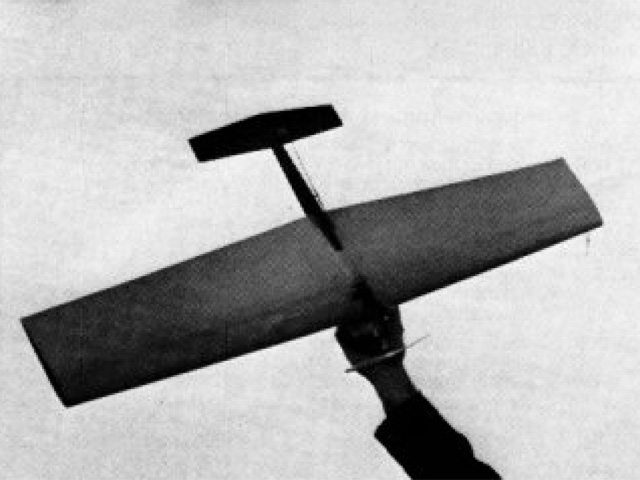