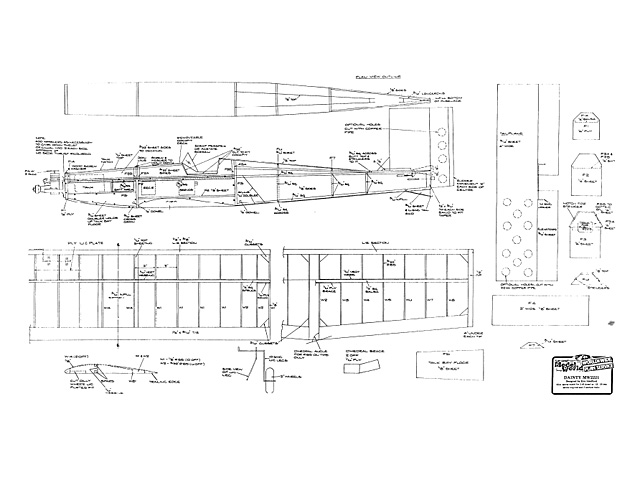 Quote: "If it's relaxing flying you're after, Eric Strefford's three function model, designed around a P.A.W. 2.49 diesel, could well be the answer.

This model came about because, having seen the problems caused to a lot of beginners by the run of the mill foam-wing trainers and having had the same problems myself but noticing that friends who tried the powered glider approach seemed to fair better in the early stages, I thought that something needed to be done. The snags with the ordinary powered glider is that they do not always look very appealing and have no undercarriage to practice take-off, also the engine commonly used, being a small glow, does not often find another home after the first model.

Dainty tries to fulfil most of these criteria, although it is a low wing and thus quite a change for a trainer. Because the wing is large and the model is built light, it has a low wing loading and is able to fly slowly with a gentle flight handling capability. It is slow to react to the sudden control movements of a learner and if the controls are released it will self-right itself and fly straight like a good trainer should. Also, being of built up construction it is inexpensive to build and easily repaired. These attributes gave rise to the name. A fellow club member of the Leisure Lakes Model Club, upon seeing the model, said to call it 'Dainty'.

The style came about one day when I saw a full size Jodel Bebe flying over my home to land at the nearby Woodvale airfield. The model used originally a PAW 2.49 throttle equipped diesel engine which is economical on fuel and can always be used in another model. It would probably fly equally well on a 0.15 - 0.19 glow but don't use full power on a .19 as it would then fly faster and lose its character.

Flying: I always read the flying notes of plan features first so I will give you these first!

With the 2.49 cc PAW diesel powering the prototype, the model has a typical light plane flight pattern. The take off from a short grass strip is fairly lengthy with a gentle shallow climb out. The aerobatic manouevres that can be performed always require a bit of additional speed provided by a shallow dive beforehand.

With the CG as per plan and the control throws as indicated, the first flight is simply a matter of switch on, start the engine, point her into wind and let her go - she will trundle along, the tail will lift and she will fly off without any assistance. Once a reasonable height has been gained, apply some rudder and get the feel of the turns - usually no elevator control is required as the turns are flat and gentle. If the nose does drop a bit then a small amount of up will hold it and produce a beautiful wide gentle turn. Release the controls and the wings will straighten up and Dainty will fly along straight and level. With very prolonged use of the rudder, a gentle spiral dive will develop which will stop on release of rudder control. Even with full up elevator and full rudder a spin will not develop.

After flying around for awhile, reduce the throttle and Dainty will gradually lose height. She loses height in a long, slow glide and is fully controllable using just the rudder. If you are a bit too high on your final approach, large 'S' turns will-lose the height. As the model gets to within inches of the ground a touch of up elevator will flare her out nicely to land.

After the initial flight you can then see what you can do in the way of aerobatics but try not to be too hard on her as she is 'dainty' and looks best when flown like that. Loops, stall turns and wingovers are possible but do require that little extra airspeed - not too much as she is not stressed to be flown like a Pitts!

I find the best time to fly her is on a nice summer evening without a breath of wind. Then I let her gain height, throttle back to tickover and go hunting for thermals. She will stay up for quite some time on days like that, even when the engine has stopped she will fly for quite a while. So if you want a nice relaxing model that can be used for touch and go or spot landing competitions, give her a try. Nearly everyone who has seen her fly has been very favourably impressed.

So out with the building board and let's begin.

Wings: I always like to build the wings first as I feel that they take the longest and once they are built they seem to encourage me to carry on. Start with the wing ribs. I usually cut a 1/16 ply pattern to start with and then cut each rib, this way there is less wastage of wood. The same pattern is used throughout but different thickness of balsa is used. All ribs marked W1 are of 1/8 sheet and the rest are of 3/32 sheet. Also required are six rib doublers of 1/16 ply for around the undercarriage mounting plates. Note these doublers only extend back to the mainspars.

Take 14 ribs (7 for each tip) for the tip sections. These will require trimming for the change in chord of the tip..." 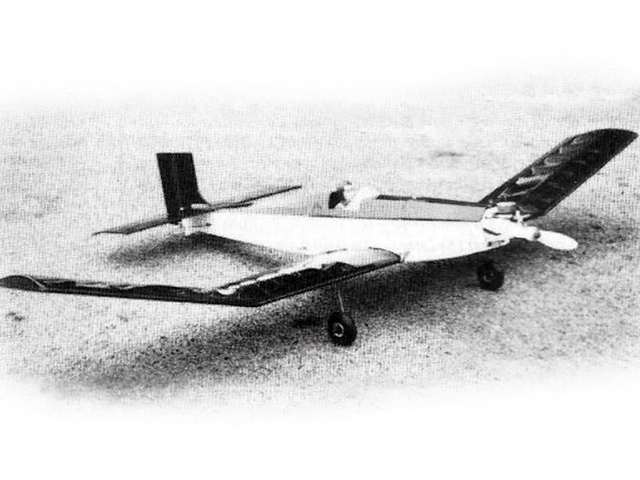