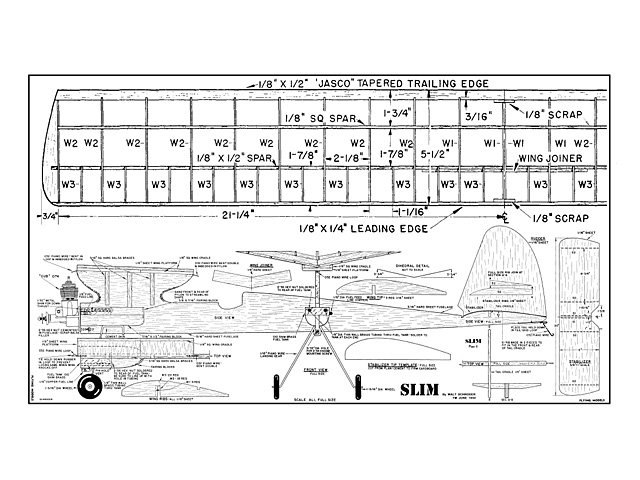 Quote: "Free-Flight Gassies for Beginners, by Walter L Schroder. First in a new series of how-to-build-it articles for the newcomer to model aviation - presenting step-by-step construction photos and easy-to-follow plans for a simple trainer model.

For your first engine-powered free-flight model, use one of the new miniature engines and build our 'Slim'. Simplicity, due to size and design, is its keynote.

The sheet profile fuselage explains the name - we doubt if there ever was a thinner engine-powered free-flighter. This slimness has a two-fold advantage: rapidity of construction (the fuselage profile can be completed in 15 minutes, and reduction of the overall fuselage drag for that increased performance so necessary for good free-flight qualities in any plane.

Our main consideration in designing Slim was to obtain a good basic free-flight model suitable for any beginner. Not a contest-winning plane - just a good, sound, stable model, simple in flight performance, and without any of the trick adjustment problems so common to good contest-winning free-fighters. One compromise had to be made - down-thrust had to be added, due to the extreme power performance of our Cub .074 engine.

Construction of the model is so basic that the photos and plans will take care of all the usual building problems. Just remember, when cementing the fuel tank in place, to be sure that its face is at an absolute right angle to the fuselage. Care at this point will eliminate any possibility of off-set thrust in the engine (having the center of the crankshaft pointing to either the right or left of the center line of the fuselage).

Test-glide your completed model by thrusting it forward into the wind from a kneeling position. The thrust should be a gentle push, with the nose pointing slightly toward the ground. Always test-glide into rather tall, soft grass.

If the model tends to raise its nose sharply (stall) and fall to the ground, add a small thin wedge, about 1/32" thick, under the trailing edge of the wing. If it continues to stall in subsequent glides, continue to add small wedges until the model assumes a long flat glide, sinking slightly all the time.

If the model tends to sink or dive rather sharply into the ground when test-gliding, add wedges beneath the leading edge of the wing until the model is gliding smoothly.

When the glide is long and smooth, start adjusting for turn. The model should turn rather tightly to the right. You can secure this right turn by breathing upon and gently warping the trailing edge of the rudder. As the turn gets tighter to the right, you will notice that the glide gets faster. Slow it up by removing incidence wedges from beneath the trailing edge. If you haven't added any incidence wedges, at this point, insert small wedges beneath the leading edge of the wing. When the turn and glider is proper, you are ready for your first power flight.

As the tank for this model will permit power flights of up to 1-1/4 minutes, be sure to follow these instructions. Determine the duration of your motor run by removing the plastic fuel line from the tank while the engine is running, and using only the fuel in the line. We were able to secure a 7-second engine run by keeping the fuel line to the exact length shown on the plans - shorter runs by allowing the engine to run a few seconds before releasing the plane to flight - and longer runs by increasing the length of the fuel line. Experiment to determine what is best suited for your testing needs.

Your initial power flights should not exceed more than 6 or 7 seconds in duration. The down-thrust shown on the plans should take care of any eventuality as far as power stalls are concerned. However, if your model tends to nose up sharply under power and then dip rather sharply, it will require slightly more down-thrust than shown. As you will note, the down-thrust is obtained by inserting shim metal between the heads of the top motor mounting bolts and the fuel tank.

When everything is according to Hoyle, your model should climb at a rather high angle in a large left circle and then, when the engine stops, reverse its flight direction and glide to the right. Flight duration will be high, so be careful that the model doesn't fly out of sight.

To prepare for any eventuality, be sure to cement an identification slip somewhere on your plane. Include your name, address, phone number and, possibly, an offer of a reward - the last will most always get a ship back for you Short engine runs and tight circles will tend to keep your model within the boundaries, of any reasonably sized flying area." 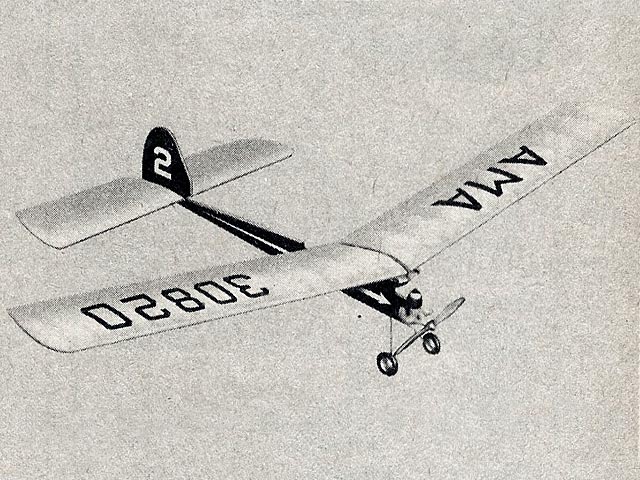