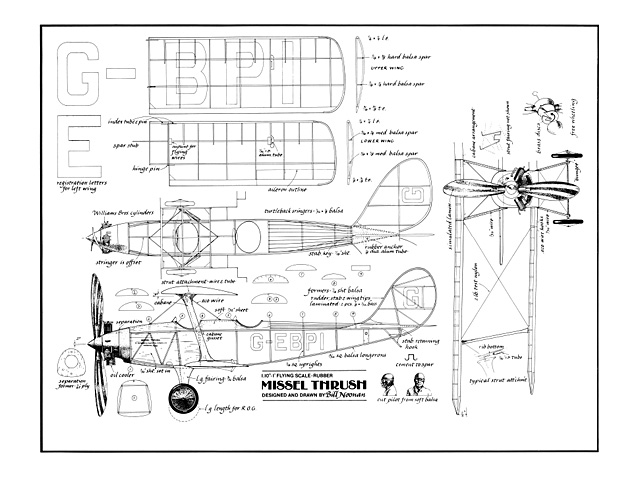 Quote: "The real airplane failed to win its contest, but the model is a guaranteed success. Missel Thrush, by Bill Noonan.

In 1926 the London Daily Mail newspaper sought to stimulate interest in two-seat light aircraft design by putting up £5,000 in prize money for a competition that required the aircraft to have folding wings, dual controls, and an engine that did not exceed 170 lb. The contest, usually referred to as the Lympne Trials, after the location where it was held, drew considerable interest and spirited rivalry among British aircraft manufacturers.

One of the lesser known craft to enter was a small, extremely attractive biplane with the unlikely name of the Missel Thrush. In spite of promising characteristics that might have made it popular as a club aircraft, fate decided otherwise. During a landing on rough ground, the Thrush turned over when the undercarriage forks dug into the earth. The resulting damage caused the diminutive plane to withdraw from competition. Later repaired, the Thrush met its end during the King's Cup races of 1928 when the pilot, Guy Warwick, became lost in treacherous weather and crashed on a lonely English moor.

Had fortune been kinder, the Missel Thrush might have been put into production, and successfully competed with de Havilland and Avro for the popular light aircraft market of the 1930s.

FUSELAGE CONSTRUCTION: The fuselage is constructed in a conventional manner. Lay 3/32 square balsa longerons over the plans, which have been protected with waxed paper or an overlay of plastic wrap. Glue 1/16 square balsa uprights in place. Note that it is necessary to make a right and a left side, the 1/16 stuff being on the inside. This allows the 1/32 sheet at the nose to be 'let in' the framework.

After the glue is thoroughly dry, remove the side frames and secure them upside-down over the top view. The straight top longeron allows this to be easily done. Glue in crosspieces, noting that the top longerons (which are presently on the bot-tom) are slightly pinched at the nose, giving the finished fuselage a somewhat triangulated cross-section, like the letter 'A'.

This triangle motif is repeated to a greater degree at the tail, but is shaped like a 'V.' Note the lower longerons shown on the top view of the plans. This design distinction reflects the sophisticated eye of the Thrush designer, John Bewsher.

Cut formers from soft 1/16 sheet balsa and glue them in place. Notch turtleback formers with a small file, and insert the 1/32 x 3/32 stringers aft of former number 6. Note that the covering forward of former 6 is 1/32 soft balsa. This portion of the top of the fuselage has only one stringer, offset to allow the .020 in wire strut anchors to be attached to the fuselage centerline without piercing the stringer. Be sure that there is a smooth transition between the 1/32 decking and the stringers, or the covering may have a dead horse look.

Prepare a paper pattern for cockpit cut-outs and trace carefully on the sheet covering with a soft pencil. Remove surplus balsa and sand cockpit edges, maintaining the elliptical symmetry of the openings.

Bend the cabane struts from 1/32 wire. The lateral brace wires are bent from .020 wire and soldered just below the 'plug-in' on the center-section underside. Note the jog in the transverse portion of the cabane struts. This is vital, as it provides a means of preventing the struts from 'laying down.' This portion should be epoxied to former number 4. To the struts add 3/32 balsa fairings, which have been grooved on the inside to fit over the wire.

Rough-cut the nose block to side and top profiles. Temporarily glue the block to the fuselage frame and contour to correct shape, taking care to maintain the subtle and handsome lines of the fuselage. When this is complete, remove the nose block by careful cutting. Hollow it out to about 1/8 in wall thickness. Cut the block at the separation point and glue the back portion back on the fuselage. Cut a 1/64 ply separation former that accurately follows the cross-section contours. Cement this on the fuselage portion. Note the provision for indexing holes and rubber passage. The holes are to receive birch pegs, which are glued in the removable nose section.

The 35 hp Blackbourne Thrush engine is simulated from Williams Bros 3/4 scale 'universal' cylinders to which finned tops, intake and exhaust pipes, spark plugs, and pushrods have been added. Drill the nose block to accept the cylinder barrels. The funny-looking gizmo that looks like an extra cylinder between the bottom cylinders is an oil cooler. It may be made from balsa discs, or turned on a small lathe. Give it a couple of coats of sanding sealer before painting it silver.

The prop hub assembly requires a little work to preserve the flowing lines of the Thrush's nose. Here is the way we ap-proached it. Cut a square block of hard balsa a little larger than the spinner/hub..." 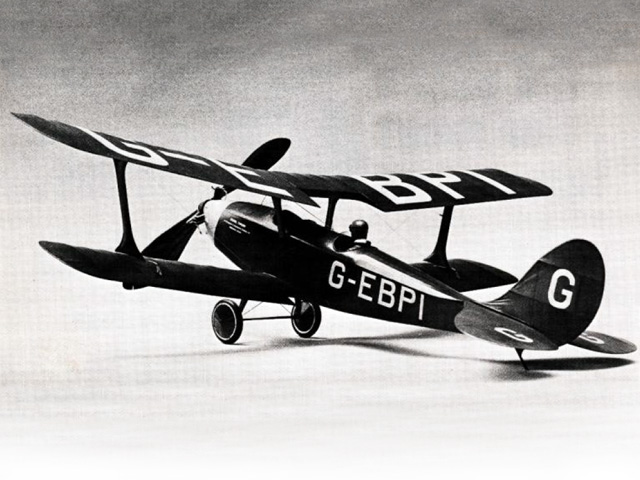