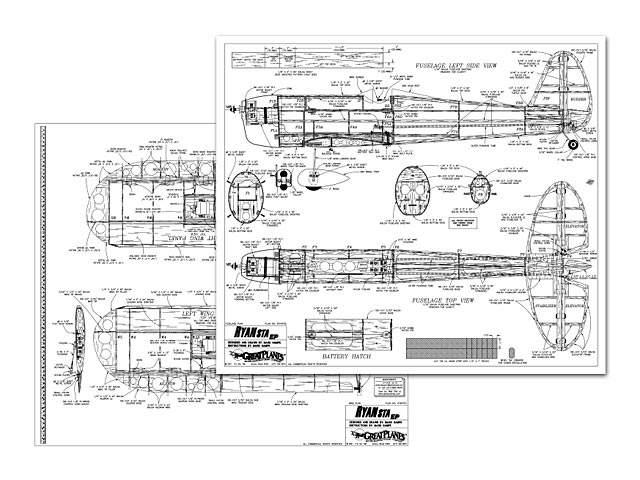 Quote: "With its white and red trim scheme and black and white checkerboard on the underside of the wing and stabilizer, the Ryan STA is one of the most recognizable civilian aircraft around. You can now have this great looking and flying aircraft as an electric without the mess and fuss of a glow engine. Electrics have been growing in popularity over the last few years and with this comes the availability of high quality motors, electronic speed controls and batteries. Flight times have almost doubled with the newest NiMH batteries available. So if you want to impress your glow flying buddies with an electric, the Great Planes Ryan STA EP is just what you need.

Radio Selection: Because weight is an important factor in the Ryan STA EP, the ideal radio system is one that has a miniature receiver, four mini servos such as Futaba’s® S3101 servos (FUTM0033) and an electronic speed control with BEC (Battery Eliminator Circuitry). The electronic speed control with BEC uses the motor battery, not a separate receiver battery, to power the receiver and servos. When the motor battery voltage reaches a preset voltage, the BEC on the speed control stops the motor while still supplying power to the receiver and servos. The Great Planes ElectriFly™ C-30 (GPMM2030) works great in the Ryan STA EP.

Motor Selection: In testing the Ryan STA EP, many different motors were evaluated. Some of them provided adequate thrust to fly the Ryan STA EP satisfactorily. Some, however, gave such marginal performance that the climb-out was very shallow and flight times were short.

The Great Planes S-60014R reverse rotation motor with a 2.5:1 gear drive unit (GPMG0850) and a 15 tooth pinion gear (GPMG0852) to produce a gear ratio of 3.0:1 enables the motor to turn a larger, more efficient propeller at a slower speed. This usually results in more thrust for a better climb rate and longer flight times up to 6 minutes.

Battery Selection: The Ryan STA EP was designed to fly on a 7-cell 8.4 volt 1700 – 3000 mAh flat battery pack. Even though the Ryan STA EP will fly well on an inexpensive motor battery pack, we recommend a battery pack that uses Sanyo® or Panasonic® cells. These cells have a low internal resistance which translates into more power and less heat.

If you are new to electric airplanes (or even cars and boats) here is a short explanation of rechargeable NiCd and NiMH batteries. A single cell rechargeable battery supplies 1.2 volts with no load (not powering anything). A 7-cell battery pack can supply 8.4 volts (1.2 volts x 7 cells = 8.4 volts).The cell rating in mAh (milli-amp-hours) is the amount of current the battery can supply. If a battery is rated at 1700 mAh, the battery can supply 1.7 amps for 1 hour (or 1 amp for 1.7 hours). This sounds great, flying for over 1-1/2 hours on a single battery charge! The bad news is that to produce the power needed to fly an airplane the size of the Ryan STA EP, the motor draws from 15-25 amps. The current consumption reduces the run time to 4-6 minutes. The good news is that propellers become more efficient as the speed of the plane increases. This lowers the current draw, allowing the plane to fly longer on a single charge, sometimes up to 20% longer. Also, if an electronic speed control is used, the motor can be throttled back, increasing the flight time. Most airplanes only need full throttle during takeoff.

Note see Ezone review (from 2002) of this kit at https://www.rcgroups.com/forums/showthread.php?191062-Great-Planes-Ryan-STA-EP 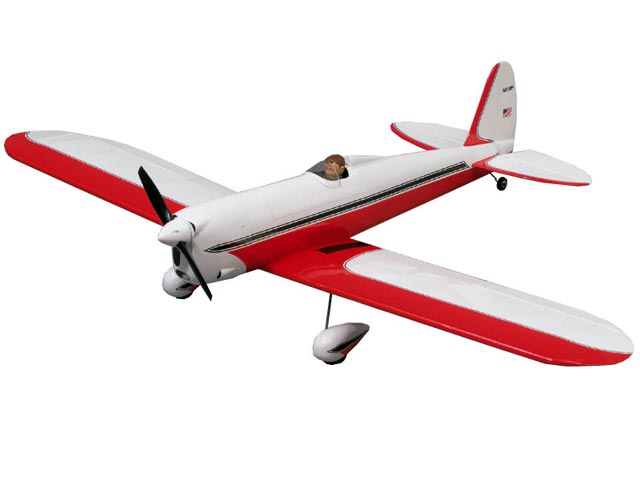