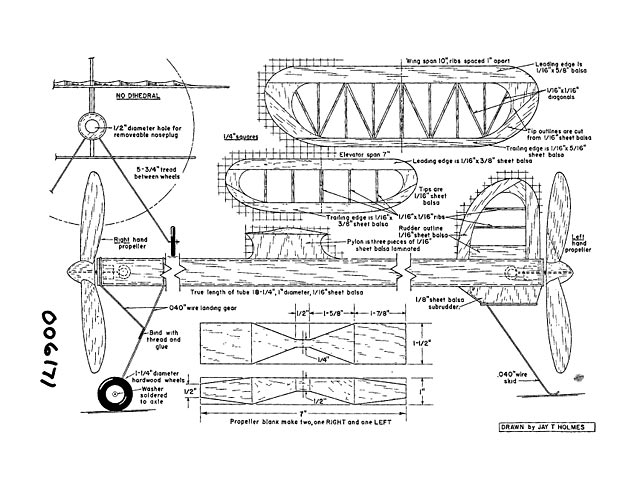 Quote: "Pile on the power yet re-tain perfect stability with this unorthodox design. Speed Made Easy, by Roy L Clough Jr.

IT IS undoubtedly true that many model builders who would like to enter speed contests are deterred. because they have heard from the experts or discovered by experience that high speed rubber jobs are usualy tricky and hard to handle to obtain consistent results.

While it is no trick to build a very fast rubber job, it is often another matter to design one that will exhibit sufficient directional stability to make clocking it a comparatively easy matter. It is of paramount importance that the speed model fly straight and true across the measured course. To have the hottest model on the field means nothing if its flight is so erratic the judges cannot clock it.

The typical speed model is nothing more or less than a 'pared down' fuselage job, with wing area cut to a minimum and propeller pitch and power upped to maximum. Since this results in tremendous torque effect such devices as offset thrust, left aileron, right rudder and sometimes acute dihedral are resorted to.

By means of these power-absorbing devices it has been standard practice to adjust the model for stright flight during the peak of its power output - which generally means the length of the measured speed course, after which the model goes 'haywire' and performs anything from a snap roll to a dizzy spiral climb to the right. This might be fine in an aerobatics contest, but it leaves too small a margin of error to be productive of longevity in heavily loaded speed jobs.

That is why the records have been set by experts familiar with every whim of the breed.

However, there is no reason for leaving the speed jobs to the experts just because they have proved tricky in the past. It is possible to design stable high speed models and to make them simple enough in construction for any beginner to build.

First of all what makes for speed? Boiled down to essentials and sifted of trivia, speed may be said to be achieved by piling on thrust and cutting down weight and resistance. It is more important to cut resistance than weight, but elimination of excess weight should not be ignored.

It seems to be the opinion of some builders that a speed model must be heavy to fly fast. This is not so, although it is easy to see how the idea got started since fast models have small wing areas to support their weight. However, there is considerable difference between heaviness and high wing load-ing, and power absorbing weight should be eliminated wherever possible without weakening the structure of the model.

A high wing loading permits a plane to fly faster since the lift at high speed just about balances the weight of the plane with a minimum of drag, whereas excess wing area, or low wing loading, at high speed results in greatly increased drag and gives the model a tendency to climb. Power used in climbing does not contribute to-forward speed, there-fore wing area must be held down below the climbing point.

A heavy model must fly faster than a light one of the same aerodynamical shape to stay in the air, but the light model can equal the speed of the heavy one on less rubber and pull away from the heavy job hands down with an equal amount of rubber. Since there is a limit on the amount of power that can be packed into any given fuselage, the lighter model will always be ahead..." 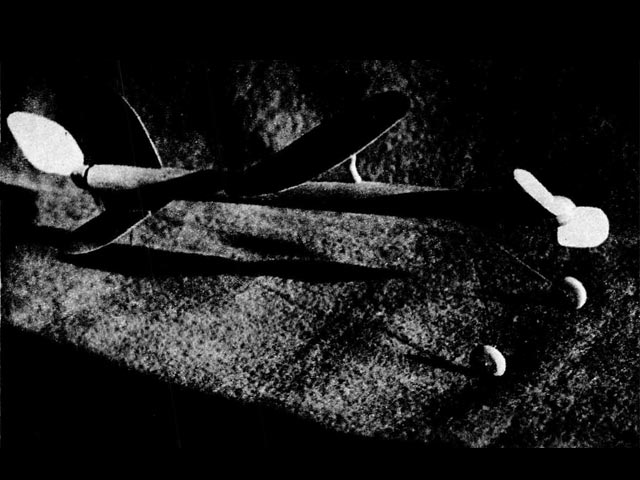