Quote: "You Have Control. Take the next step in our R/C Pilot Training Course with the Sky Rider. 58 in span aerobatic trainer for 6.5 - 1 cc motors.

HOW long a modeller takes to become proficient at the basic skills of flying a radio control model varies enormously from person to person. Some take to it like the proverbial duck to water but, for others, it is a fairly prolonged, and at times anguished, period. Once these basic flying skills have been mastered and the modeller can reliably take off, or control the model from a hand launch, fly around in a positive manner and land safely back. This is the time that he will be contemplating the next challenge.

To most enthusiasts this will mean a model that is more acrobatic and faster than the basic trainer of the Tyro Major type. Perhaps some of you will be contemplating branching out to specialised aspects of the hobby such as scale or pylon racing. To jump straight from a basic trainer to serious involve-ment in one of these departments is, in my opinion, too great a leap. It is much better to progress gradually, through purpose designed sports training models, and build up to a full confidence in flying before going on to more demand-ing models. The Sky Rider is intended as a suitable second step towards the goal of full flying proficiency.

Design criteria for the model included a reasonable degree of positive stability so that, although you must control it to a greater degree than the Tyro Major (oz10859), it still allows a certain amount of relax-ation at the transmitter. With ailerons fitted to the Sky Rider, it will give you an opportunity to co-ordinate all control functions ie elevator, rudder, ailerons and engine throttle, a task that requires a model that is reasonably easy to fly and without vices.

The Sky Rider was also designed to have a medium wing loading to allow the model to be flown at sensible speeds on the landing approach without suddenly dropping a wing or falling out of the sky. I slightly overdid this factor on the original pro-totype where the wing span was six inches greater and the chord an inch more, although the model flew well enough it looked out of proportion and aileron turns were a little on the slug-gish side.

By using a shoulder wing configuration, as compared with a low wing design, a greater degree of lateral stability is obtained and it also allows the model to be hand launched more easily. A tricycle undercarriage is incorporated for the benefit of those fortunate enough to have a decent take off strip. If you fly from a field with grass that is not too rough and you would still like to have a try at take-off's, I would suggest using a longer nose wheel leg and main undercarriage to give plenty of clear-ance for the propeller on tufts of grass, and to use a size larger in wheels.

The greater virtue of a tricycle under-carriage during take off is that it helps to make the model 'track' a lot straighter than the two wheel variety. This can be of considerable assistance during the period when you are getting used to the change over of operating the rudder on the left hand transmitter stick and the ailerons from the right hand stick (when ailerons are not used the rudder is controlled from the right hand stick). Only small rudder movements will be needed for direction adjust-ments during the take off run, indeed if the model is launched directly into wind, and the wheels are carefully aligned to track straight, no correction may be required. A steerable nosewheel is not shown on the drawing. This is a refinement that allows steerable taxying, but is not essential for take off and landing, and is therefore omitted on the cause of simplicity.

The wings are secured to the fuselage by the 'old fashioned' method of rubber bands - not such a neat method as the peg and bolt systems used on many multi-acrobatic models but very much more forgiving when the model is inadvertently landed wing tip first.

Strip ailerons are incorporated in preference to out-board type, again for reasons of simplicity but the linkage from the aileron servo suggested is built into the wing and connects to a horn in the centre of the strip ailerons. This system of aileron linkage is preferred to the often used centre positioned horns and torque rods. With the latter type of linkage there is danger of damage to the linkage and fuselage sides if the wings are misplaced through a 'hard' landing. The centre horn position on the strip aileron also assists in eliminating aileron 'flutter' when the model is flying at high speed. Flutter occurs when the air flow and pressure on the aileron is sufficient to overcome the force applied
by the servo and linkage; the aileron is pushed back and, together with turbulence around the aileron and hinge line, causes the ailerons to develop a high frequency oscillation. Top hinged strip ailerons, using Kwik Cote or Solarfilm full span hinges tend to suffer less from this problem of 'flutter' as it reduces the turbulence caused by a gap at the hinge line.

For a 'second step' training model the Sky Rider is adequately powered by a .40 R/C engine, (or a really good .35) this will give sufficient power for basic aerobatics and pull the model around fast enough for most modellers at this stage. Remember that excessive power can get you into trouble as well as getting you out of trouble at times. It is a little like a high powered car, once you know how to handle all of the power available, it can assist to obtain maximum manoeuvrability, but in the hands of the novice, this extra power will cause difficulties.

Some modellers may be hoping to progress onto larger models of one type or another and wish to purchase a .60 engine at this stage. Provided one is prepared to limit the power of a larger engine initially it should not prove to be an embarrassment. A simple method of restricting the thrust from the engine is to fit the propellers on backwards, alternatively set the motor servo movement so that it will not open the carburettor fully..." 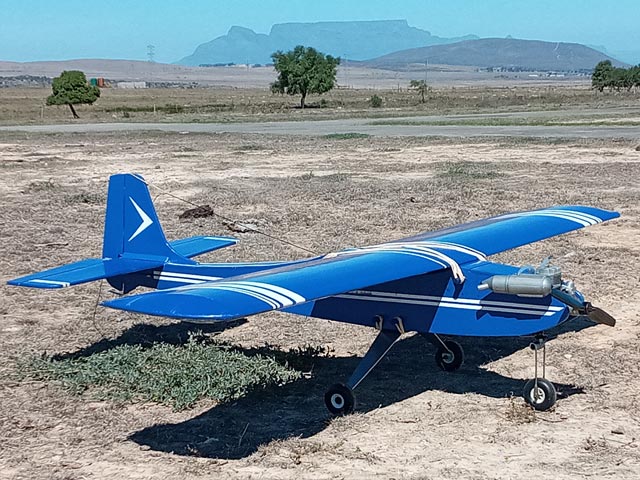 Here is a photo of the Skyrider I built some 20 years ago [more pics 003]. It was nice to build this. I enlarged the small plan that came with the original magazine article. Now 20 years later the kids have grown up, the plane has crashed and the flying site is an industrial estate. Not all sad news - the kids are still fine and about to finish university and obviously in their 20s now. The boy can build just as good as I can. At the time I met the designer of the Skyrider. I mentioned it to be 'vintage r.c.' since he wondered why I had bothered to build it, but the term vintage r.c. was a novelty. I liked the 70s feel of this one, had a period Webra 40 on it and even original 70s solar film covering. It crashed cos the wing broke while looping, this again was result of main spar damage sustained on a slightly rough landing earlier. I could not see the damage, must have been a crack in the wood. If I built it again I would add a 3x6 mm spruce strip to the spar top and underside. If I would have done that at the time I would still own this great flyer.
Joost - 22/07/2019
Add a comment