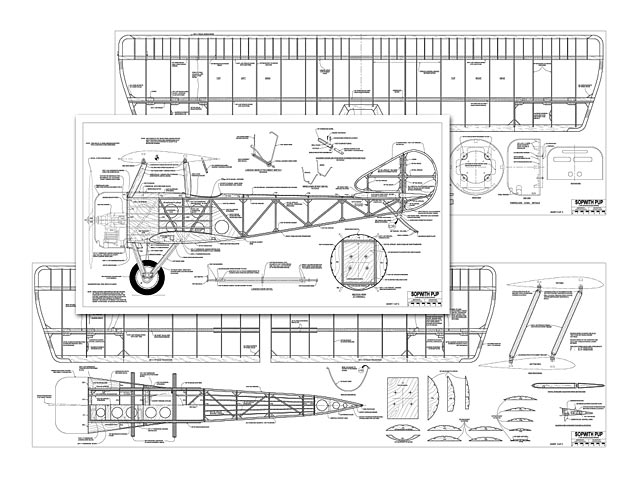 Quote: "Four years ago when I first read about the Quadra powered big ones, I became enchanted with mammoth scale. Then three years ago I decided to build a 28% Stand-Off Scale Sopwith Pup. It's 28% size because that's the largest Pup I can fit fully rigged into my Chevy Suburban. Since my motto is I steal only the best (ideas that is), I spoke with the experts in my area. Men like Granger and Larry Williams were especially helpful during the design stage. Bruce Reynolds, the archivist for the San Diego Aero-Space Museum, provided me with three-views of the Pup shortly before the museum was burned. (A new museum opened in June 1980).

I used an opaque projector to enlarge the plans onto 3 ft wide paper obtained from school, and then made a few design changes. The nose has been lengthened about 2-1/2 in, to provide for better balance. All control surfaces have been increased 5%. Wheels are 6-1/2 in William's Bros Golden Age wheels and not the Vintage type. I think the thicker rubber tire on the Golden Age type is able to handle a 28 pound plane better than its thinner counterpart. Total cost for the Pup was about $200 minus radio and engine.

The Pup is a project for someone who can spend a lot of time buying materials, cutting, fitting, sanding, gluing, painting, rigging and fine tuning this bird or, more appropriately, birddog. However, much of the work has already been done now that you have the plans. Mine weighs a shade under 28 pounds, but with 23 sq feet of lifting area, the wing loading is 19-1/2 oz/sq foot. With its thick wing and resultant displacement effect, its effective wing loading is considerably greater in lifting capacity then that figure provides.

To begin with, I found out a lot about wood, spruce in particular. The reason why spruce is the best for our use is because it has the greatest strength of any wood for its weight. It refuses to crack like pine and, when cut into thin strips and wetted down, you can literally tie it in knots before it caves in. Since spruce is expensive at the hobby shop, I bought a 1 x 8 x 15 foot board of straight-grained Sitka spruce from a hardwood company. I cut it in half and took it home in my VW. I cut all the spruce with a new plywood blade on a 10 in radial arm saw. Results were excellent.

CONSTRUCTION. Rudder: I began here because it's the easiest, simplest and instantly satisfying piece of construction. Besides, it provides good practice bending and laminating the spruce.

I used a piece of sound insulation board as my building board, placed waxpaper over the plans and drove 1-1/2 in finish nails into the board to act as guides for bending the spruce. I began with the inner piece and worked outward. After cutting the strips and wetting them down until dripping wet, I applied Titebond to both sides of each strip. Since the wood is so pliable, all laminations were in place at one time so that the whole mass could dry together. Lots of clamps and clothespins were used. It dries slow enough to give you plenty of working time to achieve fine results. Make the entire rudder outline as one piece. Thus, your strips to be laminated are about 42 in long.

When the cross pieces and gussets are added, sand the rudder with a belt sander. A final hand sanding will make your results superior to anything you've done before. Try it, you'll like it. It's most authentic and antique looking.

After sanding it, cut through the hinge line with a razor saw. Obviously you have a perfect match. When some of my fellow Palomar RC Flyers saw the finished project, they thought it would be difficult to laminate, but it is an easy and effective..."

Note this plan has been completely redrawn by Farooq Ahmad. There may be some minor differences between this and with the original RCM plan.

Quote: "Sopwith Pup 28percent. I redraw this interesting plans from RCM August 1981 article. Original design is by Mr Joseph Bokovchik. The fact that this model has been actually constructed and successfully flown makes these plans very attractive. I made some small changes like powering it with a DLE 35 and adding some additional reinforcements etc. I hope somebody like it and build it again. I plan to do that sometimes in future."

Note see supplement alternate plan file for scan of the drawing as originally printed in the pages of RCM (low res scan, central band missing). Useful to compare for differences. 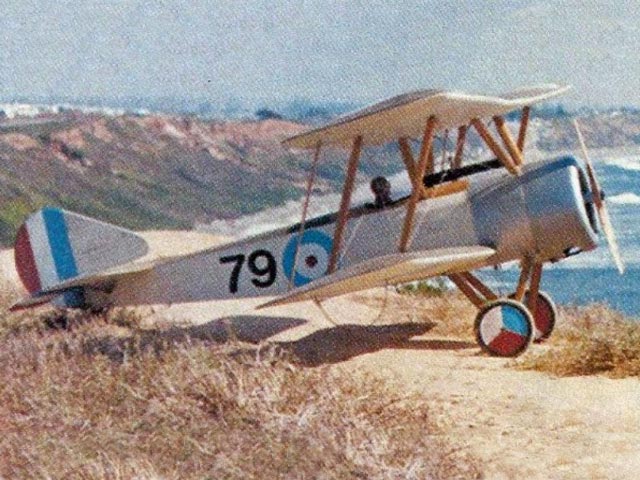