Quote: "Winner of the Thurston Cup - at 1948 Nationals - and the Flight Cup. Super Sunbug, by Roy Yeabsley.

THE Super Sunbug was developed after several years of experience with large gliders of this type. First in the series was a 9-1/2 ft span model which featured an auto rudder and wing slots. The fuselage was of monocoque construction and the cost of sheeting was considerable. Building time was rather long, so it was decided to use the more conventional box type of construction for future models. The next model, the Sunspot(oz7318), also incorporated more wing area and consequently an appreciably lower wing loading.

The Sunspot proved to be an ideal contest model and performed well at several of the 1946 contests. A lightweight version gained third place in the Pilcher Cup and a heavier FAI model placed second in the Thurston Cup. In 1947 the major successes were second in the Pilcher, third in the Thurston and second at the West London Rally Glider Event. The longest flight with this design was 20 minutes 10 seconds.

In 1948 plans for an improved model were completed, which featured the tailplane in front of the fin - both for aerodynamic and structural reasons. The nose was also lengthened to increase the ballast moment arm. This model was first flown with the old Sunspot wings, but later an improved wing design was built - making a completely new model. We called this model the Sunbug and it won the 1948 Thurston Cup. However, it was decided to redesign the fuselage for the Northern Heights Gala Day. This latest design - the Super Sunbug - is featured in these pages and won the 1948 Flight Cup. The last flight of 56 minutes 53 seconds at this contest beat the existing British record of 43 minutes, but a better time was also recorded on the same day by Mr F Best.

Construction of this model is quite orthodox - so only very brief building instructions have been written. Take more than the usual care in selecting your balsa strip and sheet. Plans are drawn one-sixth full size, with half size ribs. Draw a grid of 1/2 in squares and enlarging the ribs will be a simple process. Use the ribs to help lay out the wings and tailplane - working from the main spars.

FUSELAGE AND FIN: Build the two sides flat on the plan - over each other to ensure that they are identical. Longerons will have to be spliced to obtain the full length. Add the horizontal struts, starting from the centre of the fuselage. Now build the fin and rudder and attach to the fuselage tail. Fit the tow hooks and connect up to the auto rudder control. The trap door of the dethermalizer box is spring loaded with 24 gauge wire to assist the exit of the parachute.

Tie the parachute to a convenient place on the rear of the fuselage. Lastly, add the 1/8 sheet to the sides of the fuselage and attach the nose block.

WINGS: No special instructions are needed for the wing panels, which are built flat on the plan in the usual manner. Steam the LE of the outer panels to shape and wash out the tips slightly (negative incidence).

TAILPLANE: Cut out the T1 and T8 ribs; then place six 1/16 sheet rectangles between them. Pin the whole together and carve the rectangles to shape to give the remaining ribs. Ribs T9 and T10 are cut out separately.

COVERING: Cover the fuselage with bamboo paper or Silkspan. If only tissue is available, double cover. The wings should be double covered and the tailplane, fin and rudder single covered. After spraying all the covering with water to tighten, give the fuselage and wings two coats of glider dope and the tail surfaces one coat. "

Update 02/09/2020: Replaced the article file with a clearer copy, thanks to Patrick. 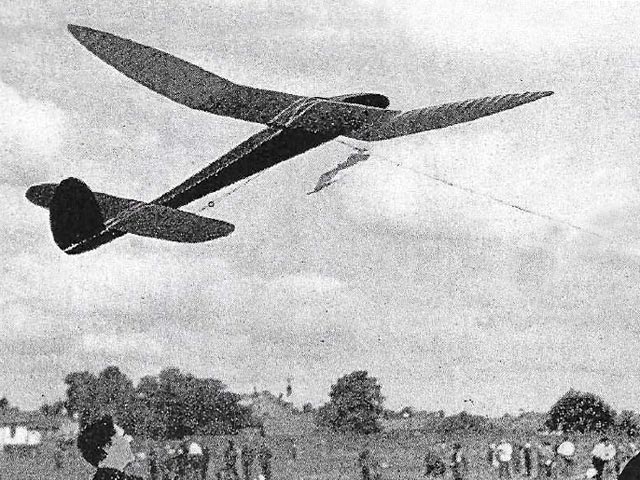