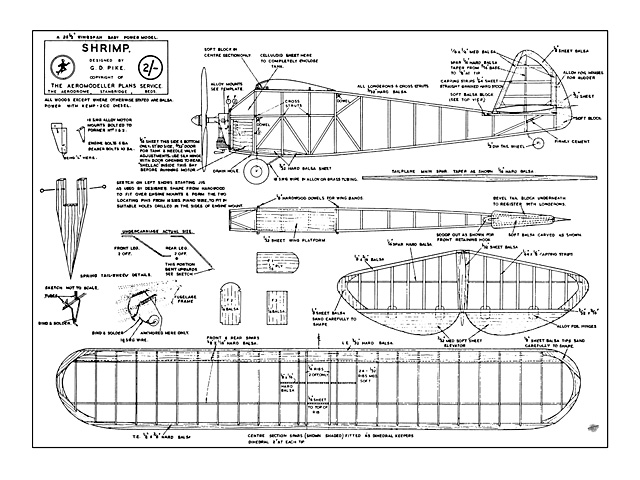 THE Shrimp was designed around the .2 cc Kemp diesel, and while combining both pocket size dimensions and trim lines, she has the realistic flight characteristic of a model many times her size. Although the Shrimp is quite capable of holding her own against some of the larger models on the competition field, she is really 'in her element' when it comes to precision flying from a restricted space on a calm evening. The Shrimp will take off unassisted with clockwork regularity after a run of about five or six feet, and is a joy to behold as she fairly buzzes overhead.

As the model is very easy to build and the plan is self-explanatory, only a few notes will be given on the construction and flying of the Shrimp.

Build the two fuselage sides together using straight grain hard balsa for the longerons, testing them for equal strength beforehand. Note that a door is provided on the starboard side only, this allows access to the carburettor which protrudes through the firewall into the fuselage. The tail platform is carved from soft balsa. Note that the tail unit retaining rubber band hook is recessed into the top of the fuselage, this allows an unobstructed path through which the tailplane may shoot forward in the event of a collision.

The tailplane and fin are built on the 'cap-strip' principle, which apart from its high strength/weight ratio qualities, also possesses an unusually high resistance to warping. The outlines are first constructed over the plan, and the spar positions are notched, they are then lifted from the plan and the spars are inserted. Cut the capstrip from 1/64 hard sheet balsa slightly longer than their correct length, then starting in the middle and working to the tips, cement all the strips to the trailing edge and mainspar only. When dry, trim off the leading edge of each strip to form a butt joint at the leading edge. The elevators and rudder are sanded to a streamlined shape and fitted into position before covering.

The entire framework should now be carefully sanded smooth, using a sandpaper block. The original model was covered with salmon coloured Japanese tissue and given three coats of full strength clear dope, the trim on the fuselage was dark blue tissue doped into place. Mount the engine in position and push the carburettor in place through the door. Note the needle valve extension was shortened on the original model, in order that it may be adjusted from the carburettor compartment, this adjustment, however, is only required occasionally on the flying field.

Choose a calm day when test flying the Shrimp. Have your model balance on the mainspar, and hand glide until a long flat descent is obtained, small adjustments may be made as required using the elevators and rudder. The author flies his model in both left and right hand circles of various diameters, this is easily accomplished thanks to the model's spiral stability.

The author prefers to use the starting jig shown on the plan, using a length of rubber-covered flex as a starting cord. A hypodermic syringe with the needle slightly bent towards the end is most useful for filling and emptying the tank, and may also be used for sucking excess fuel from the cylinder in the event of hydraulicing.

Start up the engine and launch the model into wind, or, if a smooth surface is available, let your Shrimp take off on her own, then - cast your eyes skyward and observe the prettiest little model that ever took the air."

Article, thanks to RFJ.
Alternate scan. 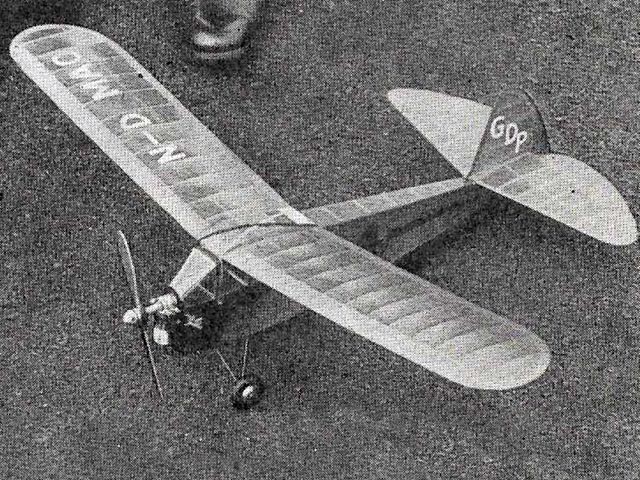