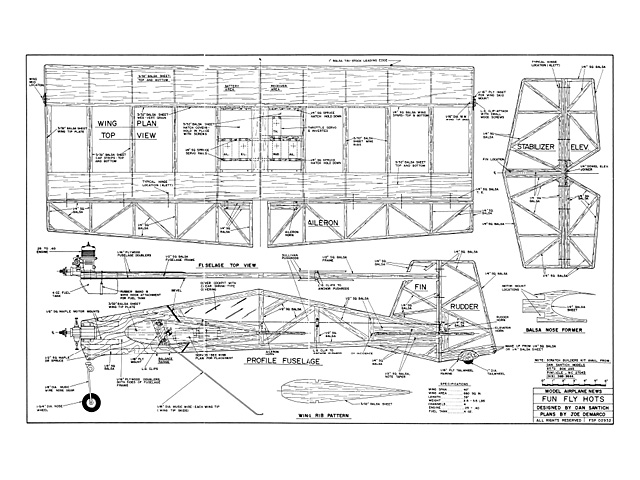 Quote: "WHEN MY FIRST Hots appeared In the April 1984 issue of Model Airplane News, It was an immediate success. The plans were so popular that they remained top sellers for four consecutive years. Why is this? Simplicity of design and great flight characteristics. Those two elements not only made the original almost a household word, but they also have contributed to the success of its successors as well.

In terms of flying and building, I've never heard a bad word about the Hots. Some clubs have even held fun-flys restricted to Hots only! The Hots (oz4581) and Super Hots (oz4581) are kitted by Midwest Products and remain good-selling kits to this day. The Ultra Hots, which I produce a giant-scale kit for, has sold in record-breaking quantities.

The Next Generation: So what does all this mean? Modelers want something that will challenge their flying skills yet won't put them in bankruptcy during the process. They also want something that they can assemble quickly. The Hots series of designs has filled a need. Enter the Fun Fly Hots.

It wasn't too long ago that you could fly a Hots or an Ugly Stick (oz5175) in a competition fun-fly and stand a good chance of winning. Those days are gone! The competition fun-fly models that seem to be the rage today are little more than a wing and a tail with a powerful engine up front - no question about their flying capabilities. Some of them are absolutely awesome. I recently attended a competition fun-fly and was amazed by the performance displayed by this relatively new breed of design. The one thing that stuck in my mind was that you couldn't tell one from another - no character at all. Of course, it's a little difficult to dress up a model that has no fuselage other than a fiberglass shaft! That was when I decided to design a fun-fly model with an identity. The design would also have to stand on its own against these flying pool cues. This was a tall order!

The development process for the Fun Fly Hots took me nearly a year. My workshop is littered with the remains of 10 or so prototypes that, for one reason or another, didn't work out. (Interpret that as 'crashed.') I wanted a highly maneuverable model, yet one that would fly at a walk-pace under full control. It had to have the roll rate of a blinking eye and be able to loop inside its own length. The Fun Fly Hots presented here has those capabilities and more. It's an absolute pussycat! Because of the very thick airfoil, the elevator and aileron response are very numb around neutral, but the control rate is proportional to your stick movement. Move it a little, and that's what you get from the model. Go full tilt and it will respond accordingly. Also, again owing to the thick airfoil, you have a built-in air brake, This makes it very easy to do quick touch-and-go's, either by wing-over or by looping. The wing-over method works best for me. I've managed 10 touch-and-go's in 18 seconds. That was the best flight; the average is 25 seconds.

The key elements to a good flying model are weight, balance and alignment. Pick only contest-grade balsa and make sure that the wing, stab and fuselage are on a zero-degree center line and that your balance point is as shown on the plans. Use light servos and a 225mAh battery. Try to keep the flying weight under 3 pounds. I use the 0.S. FSR ABC .32 engine with good results.

To get as many flights as you want at the field, check out the Ace FFC - fast field charger. Simply connect it to your 12V starter battery and it will keep your receiver and transmitter batteries fully charged.

Scratch-building is a lot of fun and it's cheaper than kit-building if you buy balsa in bulk. Since it may be some time until the Fun Fly Hots makes it into kit form, order your plans from Model Airplane News and then write to me. I'm begin-ning, with this model, what I call a "scratch-builders' kit." It contains all the wood necessary to build the model for only $25, plus shipping. My address is at the end of this article.

CONSTRUCTION When you get your plans, the first thing you should do is check the wing from the center to each tip for equal measurements. Blueprint images can be distorted during the reproduction process, and a difference of as much as 1/2 inch isn't uncommon..." 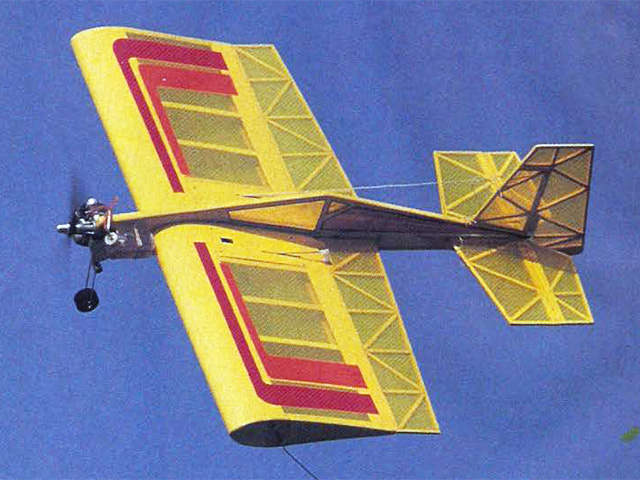