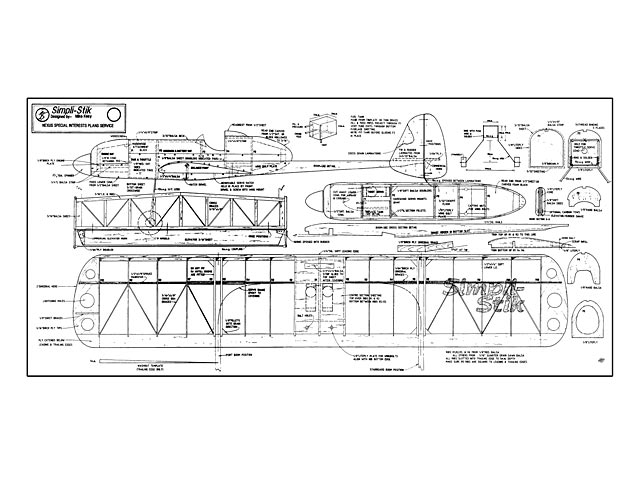 Quote: "As a lad of 12 towards the end of the last war, I fell in love with an all-balsa pod and boom chuck glider, the name of which has been lost with time, but I have remembered well the method of construction and general layout over the intervening years. The 36 in polyhedral wing was made by carving a (very) rough aerofoil section from sheet balsa. Elastic bands secured twin booms to the wing and stabiliser and the booms also carried the fins (no rudders were needed in those heady days!). The pod was shaped from solid balsa block.

When young, model performance and size seem perfect and enormous; I can still remember flying Bill Dean's marvellous control line Phantoms from the original Keil Kraft kits (as seen at the recent Model Engineer Exhibitions) and they seemed huge! Similarly, my all balsa chuck glider would fly forever but in reality only a few tens of yards! Anyway, I was so impressed with its performance that the thought of flying it still awakens boyhood pleasures some 50 years later.

One night, after a bout of navel contemplating, l awoke like Archimedes with a start: Eureka! I'll make a radio version and, perhaps, relive those feelings.

The model had to be simple to build (like the original) and have strong booms (sticks). So it would be simple, with sticks - 'simplistic' in fact, hence the name. It should take stan-
dard sized radio and a small 'cooking' engine to drag it around. The wing would, like the original, be flat bot-tomed in section but of built up con-struction to save weight. It would incorporate copious amounts of washout to prevent the twitchiness often experienced with small models. Finally, it should have 'vintage' appeal.

Interestingly enough, I showed the prototype in an unclothed state at last year's Old Warden Vintage Day and was encouraged both by the favourable reaction from modellers and from some of our elder statesmen who swore they built one in the early fifties - I smiled benignly!

On with the construction: There's nothing in the building of this model to frighten anyone who can glue a couple of bits of wood together and finish them to a smooth outline.

It's best to start with the wings. Make up a set of 12 ribs from 1/4 grain 1/16 sheet balsa plus seven from medium 1/8 to the outlines shown on the plan, using the sand wich method and ply or aluminium templates - I prefer the latter. Rather than end up with an untidy join at the trailing edge where the ribs slot in, you may like to allow for the appropriate thickness of the leading edge of the selected trailing edge (if you see what I mean!) when drawing the rib shape. Take trouble to make the cutouts for the leading edge and main spar a snug fit, as this will improve the strength of the joints and improve the linearity of the completed wing.

Fabrication of the leading edge is the first job. Use runny cyano to glue together soft to medium grade 1/2 x 1/4 in balsa and soft 1/4 in square sections. This may seem like overkill but much of the wood is sanded away after construction, ending up with a strong, light and nicely shaped part. Pin down over the polythene covered plan then add the rib-slotted trailing edge and the 1/2 x 1/8 spruce main spar complete with its 1/16 birch ply dihedral braces.

Hold everything in place with the two 1/8 balsa end ribs set at 90° both vertically and to the leading and trailing edges, as align-ment of the booms at a later date will depend on this. Cut out suitable sized holes for the servos in 1/8 liteply and white glue in place so that the eleva-tor and rudder snake outers will lie along the undersurface of the ribs. Sheet the top of the centre section ribs with 1/16 medium balsa - the bottoms are infilled with 1/16 balsa with boxes to surround the servo wells. Note the position of the 1/8 liteply wing bolt plate..." 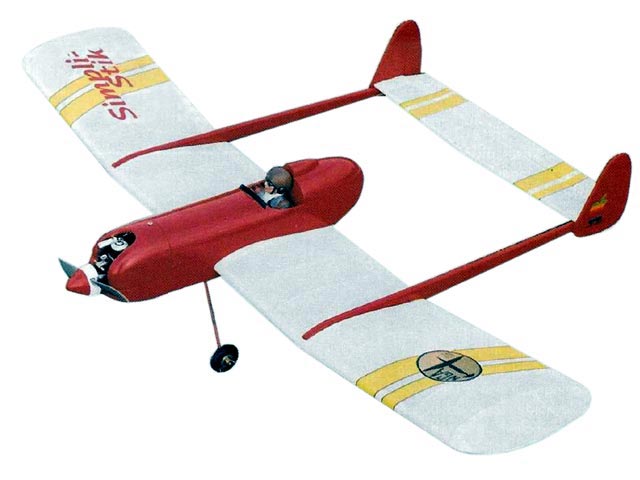