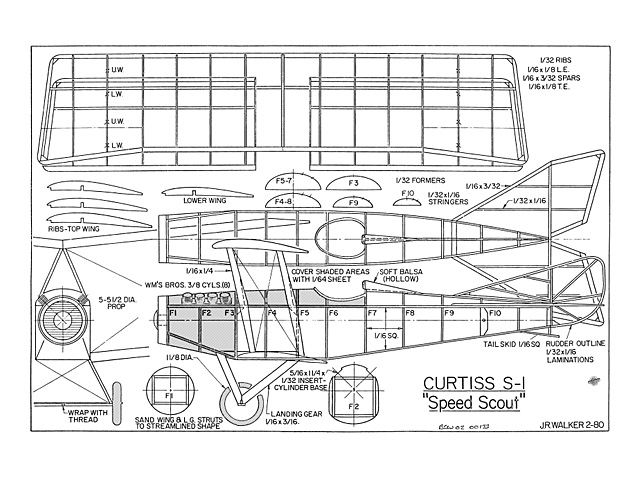 It is reported that the SPEED SCOUT was the Curtiss Aeroplane Company's first attempt to produce a single-seat fighting scout. It was the smallest practical aircraft that could be designed around a 90 hp eight-cylinder 'V' Curtiss OX engine. The plane had a span of only 20 feet and first flew in 1916. Apparently, it just wasn't enough airplane. Under ideal conditions it could only reach a top speed of 100 mph.

To improve performance, the span of the top wing was increased. This however did not improve flight characteristics enough to warrant further development. Only one S-1 was constructed. The original configuration of the S-1 is modeled.

BUILDING THE MODEL. Select the wood carefully. Sig contest grade was used on the original model. Cover the plan with waxed paper or plastic film to prevent your work from sticking fast. Cyanoacrylate adhesives were used for all construction.

Construct the fuselage first. Be sure both sides are identical. Carefully cut the formers and nose block to shape, and cement in place. The radiator ring was cut using a section of razor blade clamped in the inking nibs on an old drafting compass. A piece of fiberglass screen simulated the radiator. Panel the top, sides and bottom of the nose section with 1/64 sheet balsa. Very light, almost dead soft 1/32 sheet can be used but must be well sanded after it is cemented in place.

The engine can be simulated with short sections of 1/4 dia balsa dowels or with Williams Brothers 3/8 scale cylinders. The cylinder heads were cut from Railroad board using a paper punch. Locate the cylinders as shown on the plan.

Construct the tail surfaces. The horizontal tail is simple; it has no curved sections. The rudder was made by bending moistened pieces of 1/32" x 1/16" balsa strips around a card stock pattern. Wax the pattern so the strips will not adhere to it when cement is applied.

Wing construction is straightforward and should cause no problems.

Remove the 'fuzzies' from the parts you have constructed with well-used fine abrasive paper. Don't forget to sand the wings' leading and trailing edges to airfoil shape.

Cover the model with a good grade of white tissue. Use white glue thinned 50-50 with water to attach the tissue.

Fabricate the landing gear and wing supports. Sand them to streamlined shape before cementing them together. Join them to the fuselage. Mount the wings and tail surfaces. Be sure they are aligned properly. Shrink the tissue by spraying with rubbing alcohol. Finally, apply two coats of thinned Sig Lite-Coat to which a few drops of walnut stain have been added to give a natural cloth color to the covering.

Hungerford wheels were used on the original model. However, if you didn't build lightness into the tail of your model, you may have to use Williams Brothers antique wheels to add weight to the nose. Test glide over tall grass until a nice glide is attained. Our model flew with a loop of 1/8" rubber. Power flight adjustments are made by shimming the nose bearing. To reduce wear, the nose bearing was drilled with a 1/16 dia drill and a piece of 1/16 OD brass tubing was cemented in the enlarged hole.

To achieve maximum flight performance, experiment with different makes of props. You may even want to carve your own out of basswood. You'd be surprised how much difference the right prop can make." 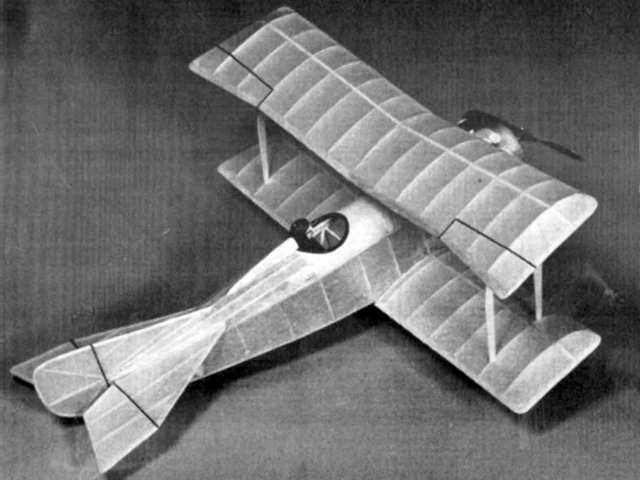