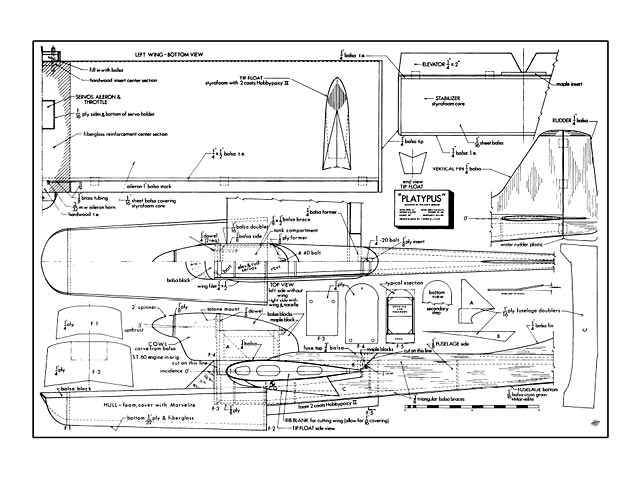 THE PLATYPUS IS the fulfillment of an ambition, after three years of frustration.

Although I had flown RC for ten years, my interest in flying off water began in 1966 at the first NERCM Hydro Meet, Brimfield Dam, Brimfield, Mass. I installed a set of floats on an Aeromaster (oz1971) and spent the day trying to get it off. These efforts made the cover of Flying Models (Jan 1967), but the caption indicated that the Aeromaster didn't quite make it.

The challenge now was greater but I didn't fare much better the next year. The ship managed to get into the air, but that was about all.

In 1968, I installed a set of floats on a Kwik-Fli II (oz7483) and put in some practice flights. Back at Brimfield in September, radio trouble on the first flight resulted in a semi-controlled crash on the lake shore! The second day of the meet, I returned with the repaired, hopefully flyable, airplane. The radio worked fine, but the ship flew poorly, apparently due to misaligned floats, a result of the previous day's damage. So much for 1968.

During these round trips to Brimfield, I noticed that flying boats had much better water handling characteristics than float type planes but were much less acrobatic. So why not build a flying boat which was as clean and aerobatic as the land-based hot muftis?

The Platypus was designed around this idea. A low to midwing provides equal (if possible) distribution of weight and lateral area, above and below the wing. Having the wing near the water eliminates struts, since tip floats always seem to come off the usual flying boats. A low profile gives better water handling characteristics, especially in crosswind taxiing.

A short, wide, and concave hull provides fast planing, with minimum spray, for quick takeoffs and keeps the profile low. The upper and lower angle of the hull are equal to minimize air effects and to prevent hunting as the flight angle of the plane changes. A high step gives easy release from the water and a five-degree aft fuselage angle allows rotation for takeoff.

All these ideas were great, but would they work? This was my first plane completely designed and built from scratch. The first test hops were from hand launch and the ship flew right off the board. To have it perform that well the first time was most satisfying.

The next step was water tests. Taxi tests indicated that the buoyancy factor was cut too close. When the ship went from standstill to flying speed as the throttle was opened, water came up over the nose and killed the engine. However, if the plane were held when the throttle was opened and then released, it got up on the step immediately and took off.

The first flight was routine until the landing - a collision with a boat dock support. Result, one sheared wing and no hobby shop within 50 miles (we were on vacation in northern Vermont). The foam wing came in handy. It was repaired with epoxy, pieces of foam from a portable radio package, and several balsa wings from ten-cent gliders. The MonoKote then was ironed back on and the plane was ready to fly.

Further tests and flights indicated a modification of the hull was definitely required. After alterations, a test hop was made the week before the 1969 Brimfield meet. The plane flew great until a wire let go in the elevator servo. Net result, several pieces of fuselage and another broken wing. Back to the workbench and then another test hop the night before the contest. Fuel line trouble developed. By the time that was remedied, it was too dark to fly! So off I went to Brimfield, with an untested plane.

The day of the contest was beautiful - a light wind, slight chop, perfect for flying - and I finally had time for a check flight. And then, at last, I won first place in the flying boat class! The Platypus, with both excellent water handling and flying characteristics, was a breakthrough toward high performance seaplanes.

Construction: The fuselage is made in two sections: the foam hull and the main fuselage-nacelle structure.

Hull: Formers 1 and 2 of 1/4 in ply are used as the pattern. Mark the fuselage opening of F2 but do not cut it out at this time. A four-inch thick block of foam is required. (I used blue styrofoam, but white beaded foam should work as well.) Use small nails through pre-drilled holes to pin F2 at one end of the block. Be sure it is squared and centered. Now, carefully center Fl, both vertically and horizontally, at the other end of the block.

The top of F1 is 1/2 in lower than the top of F2, which results in a tapered hull, both top and bottom. The inverted V or concave
portion of the hull is a flat V at the front and V-shaped at the rear, which requires some care when cutting the foam. Using the standard hot wire technique, start at the top center and cut around the formers. When cutting the bottom, hold the wire at the V until the flat portion of the front is cut, then proceed on around the hull. Remove F2 and make the fuselage cutout..." 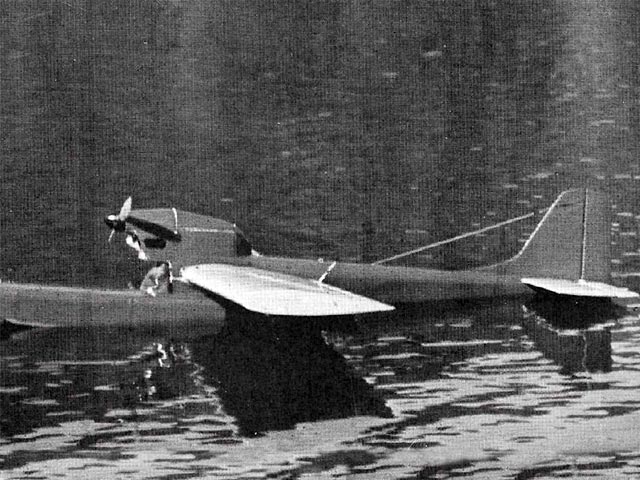