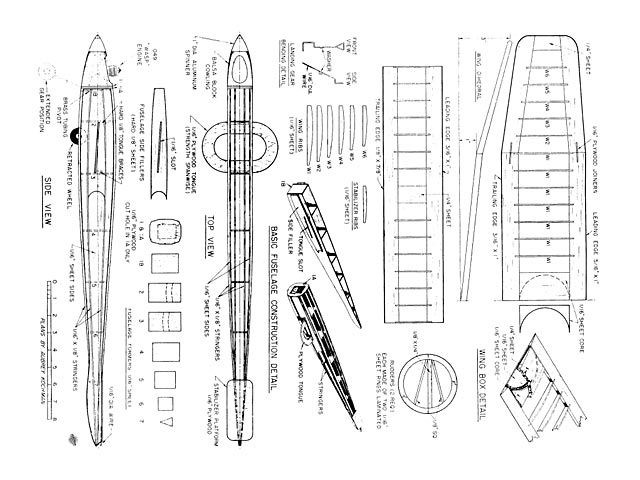 Quote: "She's sweet, she's simple, she's got a lot of get-up-and-go; and in a contest she's a real winner. Miss Quito, by John R Carl.

For many years we have been one of the small group of die-hards who believe a ship can be a good contest model and still be attractive to the eye. Models like Vernon Oldershaw's "Glory Bee" (published in AT some years ago) is proof of this. Our only real complaint with most of the nice-looking models is that they usually involve too much work and don't always fly as well as they look.

'Miss Quito' was designed and built both to fly and to look well. That we have been successful is easy to see. (Pardon our modesty.) The total building time took about twelve hours and the pictures which are shown here were taken of the second model by Bob Lux (a popular West Coast modeler and amateur photographer). The reason they were not of the first model is because Miss Quito No.1 flew OOS on her third flight and has never been seen since.

The original model was Spitfire powered and weighed in at 4-1/2 oz. The climb was extremely fast and to the left with a smooth flat glide to the right. Little can be said about flight times because of the short while it remained in our possession: however, the No.2 ship powered by the new Wasp .049 has a really incredible climb and consistently turns in long thermal flights, any of which would be plenty good enough for any contest. The additional half ounce of weight seems to make no difference, and the increase in power really shows up.

Construction is simple and fast, the only different feature being the plug-in wings, and they are simpler and faster to make than the conventional pylon and wing set-up.

Each ship is different from its twin be-cause of warps and a difference in the type of material used. So the only flight suggestions we can give are to set the rudders for a gentle right bank and trim the model by increasing or decreasing the stabilizer angle of incidence. From there on it is up to you.

This model is not at all tricky. It has a normal tendency to turn left, which must be adjusted for with right rudder so that it climbs left under power and tight (100 to 150-foot) circles to the right in the glide. Above all don't be afraid to experiment. This ship is built for punishment and the increased performance obtained is well worth the effort." 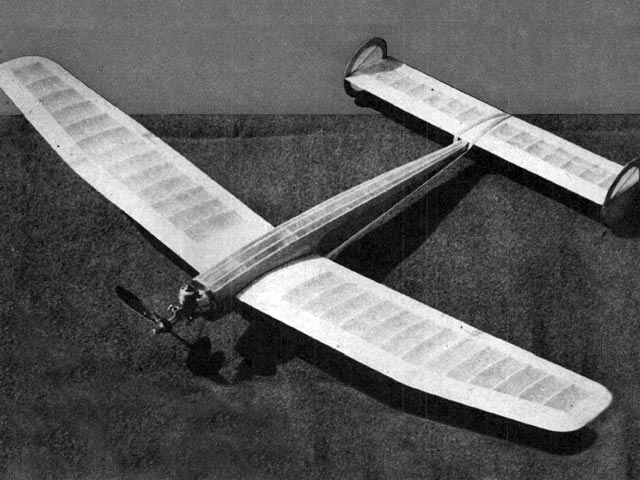