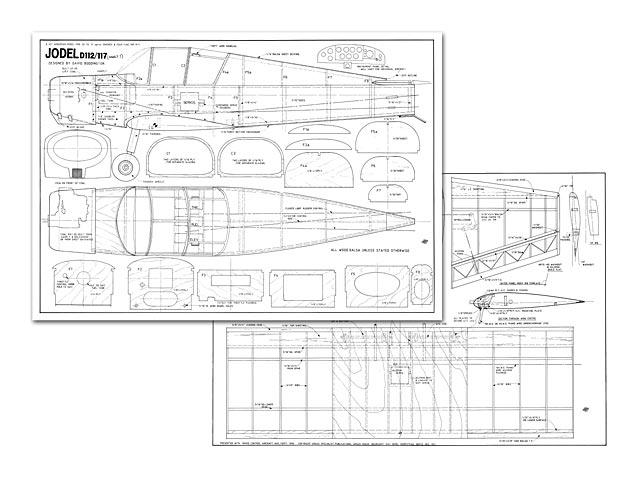 Quote: "Build this model of an attractive homebuild - the JODEL 112/117. Designed by David Boddington.

TO CRASH AND SEVERELY DAMAGE a scale model is, at any time, painful. It brings a sick feeling to the stomach, tears to the eyes and thoughts of taking up fishing as a hobby. When the model is on its maiden test flight when it crashes, is intended for publication in the next RC Scale Aircraft magazine and hasn't even been built by you, the whole episode takes on traumatic proportions. So let's get the sob stuff over first.

Maurice Partington who built the prototype Jodel model for me - he also built the two versions of the Christen Husky (oz5936) models I designed - was due to go on holiday and couldn't be at the first flights of the dear little 'bent-wing'! However, he had checked everything out, even to the stage of taxiing the model around the lawn and charged the batteries through the night. I carried out further checks, reduced some of the movements, added a little lead to the nose and weighed the model (3-3/4 lb dry).

After taking a few photographs, the remainder could wait until the flying shots had been obtained (you would think I'd have learned by now), off to the flying field with the weather sunny and a moderate wind blowing. A few final checks await a relatively quiet moment during the club flying, start-up,
control surface checks with the engine running and off we go.

The Jodel tracked nice and straight, lifted off with just a touch of up and climbed away a little steeply, but a bit of down elevator calmed that down. At about 60 feet height the model suddenly diverged from its straight and level, put its nose down and into a sharp turn. From here on any stick-bending became pointless and the mind goes into overdrive imagining all the reasons for the mishap. A quick glance at the broken remains is sufficient to confirm that the situation is serious and (because the radio is still working OK) a range check confirms that the ground range is a mere 25 yards! So why didn't I carry out a range check before flying? With other modellers flying at the field a range check (with other iramsitters closer to the model than yours) is not very meaningful although, in fairness, the disasterously short range would probably have shown-up.

We now have the situation where the model is badly damaged and insufficient time for a re-build before the magazine deadline, so what to do? I did what I think most modellers would do, put the model into a corner, prayed for miracles and then plucked up the courage to take a closer look after a couple of days. The radio was still working so it suggested that the battery state was not the cause of the reduced range - anyway it was a case of returning the radio for a complete check over.

Although the crushed and shattered front fuselage and broken wing looked beyond repair there was little alternative to try to stick the pieces together, at least to the state when it can be reflown to check the flying characteristics. I felt 95% sure, as a result of the short flight and previous flying experiences, that the model would fly perfectly well, but that other 5% was nagging away.

Lesson one, when contemplating extensive repairs, is to collect every little piece of airframe from the crash site. It is also quite easy to overlook major items such as battery packs and servos, so carryout a thorough search. From there on it is a matter of 'jig-sawing' all the parts together, reinforcing where necessary and hopefully ending up with something that is structurally sound and of reasonably the same appearance as before. Suffice it to say that I managed to get a whole lot of pieces together to a stage where the model could - with different radio - be test flown again. At the stage of writing this article Maurice has not returned from holiday, so if you read of 'Crazed aeromodeller attacks fellow vandal', you will know the reason why. This one is going to cost me a very large drink.

Let's go a Jodelling: Construction of the 112 is totally traditional and does not require any special components or accessories. Providing you build the version with the flat windscreen the canopy can be constructed from three pieces of flat transparent sheet. The cowling may be built up from sheet balsa, as the prototype model, from 3/4 in balsa nose and .4mm plywood (the sides and top and bottom cowl lines are straight lines) or you can form a GRP version.

Note that the side view of the fuselage is longer than the plan view, this is to allow for the considerable width and consequent curvature of the fuselage towards the rear. An OS 20 four-stroke engine was installed for the prototype model and proved to be adequate for the model, the OS 26 Surpass would give a truly sparkling performance.

In common with most scale designs. the model is more likely to end up tail heavy rather than the other way round, so keep the tail end construction and finishing to a minimum weight. The airborne battery pack should be fitted under the fuel tank ahead of the wing and if you can fit the servos ahead of the position shown on the drawings. so much the better.

Maurice opted to use thin aluminium to represent the canopy framing and got so carried away in this occupation that he forgot to include a pilot in the cabin area. It is a large area of transparency and really does need a figure sitting on the left hand side, the scale of this 45-1/2 in span model is approximately 1/7th.

A smaller home build: Cut fuselage sides from light, equal density 3/32 balsa and glue the longerons, uprights and doublers in position. Mark on the positions of the servo bearers. Cut the formers with suitable holes for engine mount, fuel tank and control linkages (pushrod is recommended for elevator and closed loop for rudder - for aileron use a centrally mounted servo and pushrods and bellcranks)..." 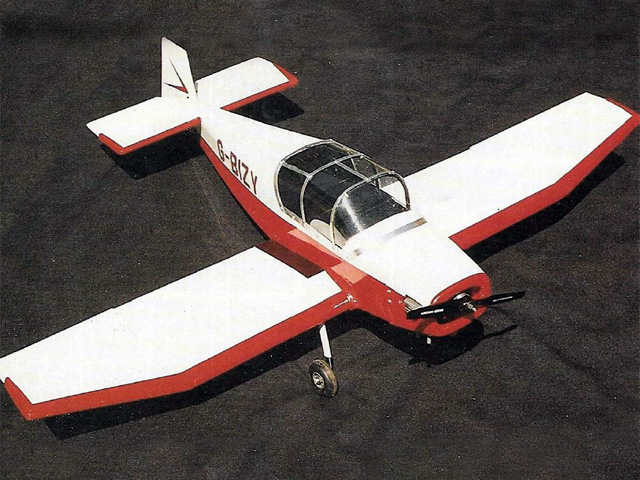 How many degrees dihedral wing tips?
BG - 21/12/2019
There is a template showing the angle for the root rib of the outer wing panel, shown on sheet 2 of the plan. It's not annotated in degrees, but that shows the angle.
SteveWMD - 21/12/2019
Hello, During the confinement of this spring 2020, with a French friend (I am Swiss), we simultaneously built the same Jodel D112 from the plan of Mr. David Boddington [pics 007-014]. The model was enlarged to 1.2x to 1/6 scale. They are powered by a Saito FA30 and an ASP FS30 (5cc 4 stroke). These two constructions were the subject of a post on a forum. https://forum.spmc-modelisme.fr/viewtopic.php?f=9&t=5222&p=22669#p22669
Thank you for hosting all these plans and for the huge amount of work done in managing them. Excellent year 2021,
Jean-Michel Baertschi - 29/12/2020
Hello, Further to my message concerning the Jodel D112 of Mr David Boddington's plan, I am sending you some pictures of the one built by my friend Armand Schumacher. Best regards,
Jean-Michel Baertschi - 09/02/2021
Add a comment