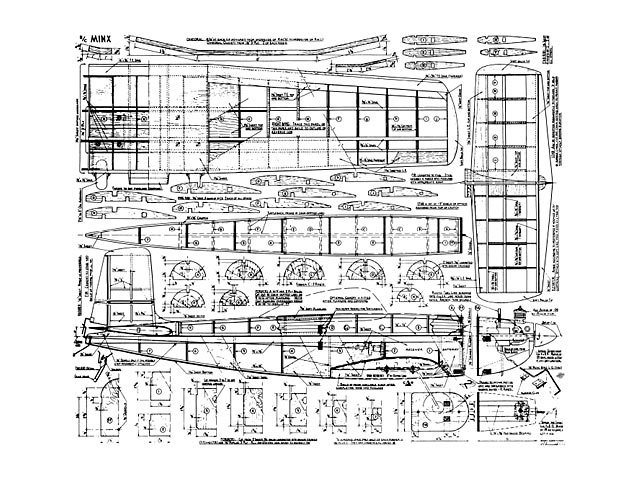 An efficient design for the more advanced builder, our Minx is not for those who have been spared past experiences in really 'building' model planes. There are no promised short cuts nor implied assurance that it can be put together with an old razor blade and 35 minutes of spare time. This is a project. The only promise is that if the Minx is constructed with reasonable model-engineering precision it will be a joy to build, and an even greater joy to fly.

Minx as here described is the second in its line. The prototype underwent several modifications before a satisfactory balance of variables was achieved. As all the modifications were concerned with force arrangement as affected by both moments and angles of attack, the final version used all the components of the prototype except the lower half of the fuselage. Greatest single departure from the original design was lengthening the tail moment. Result is a ship which is lively without being overly critical. Its short-coupled prototype had been very 'nervous' and sensitive to a point where a shade too much down or side thrust meant a very hard landing indeed; so violent and untidy at times that it seemed hopeless to expect anything less than a total creaming. Because nothing ever happened that couldn't be fixed in a few minutes, even after the most shattering impact, it seemed conclusive that the structure was soundly designed.

Construction is elementary. Fuselage crutch is pinned down flat and square with the former FF just over the edge of the board. Entire structure except for wing saddle and the 1/8 sheet filler between formers FF and 3 is completed and sheeted before it is removed from the board. Setting the wing at zero incidence, the saddle is cut to exact contour after the wing center-section, except for the fairing, is complete. Fuselage is then finished.

Formers and 1/4 in square longerons of the turtleback are temporarily pinned to the fuselage. After planking the struc-ture is removed. This ensures a perfectly matched fit.

Wing requires no explanation, except any thoughts of lightening the structure are to be discouraged. Particularly, the rather lavish use of 3-ply is most necessary for adequate landing gear support, though it is quite satisfactory to use poplar rather than the heavy hardwood 3-ply. With the wing properly located in the fuselage saddle, construct the fair-ing on the underside of the center section in such a manner that the fuselage contours are continued. There is usually enough scrap left over for this little job; if not, the fairing may be carved from a block and hollowed out.

Tail surfaces are intended to provide both rudder and elevator control. Even if a rudder-only system is used, the elevator comes in handy for trim if attached with soft wire pegs instead of hinges. It is suggested that the tail assembly be cemented permanently to the fuselage, but rubber bands may be used if desired.

Landing gear is of simple torsion bar design. The rear clip of soft aluminum is strong enough to keep the strut in place except in the very hardest landings, in which case the gear merely flips forward and off without damaging either itself or its support. (Further construction details on the full-size plans.) " 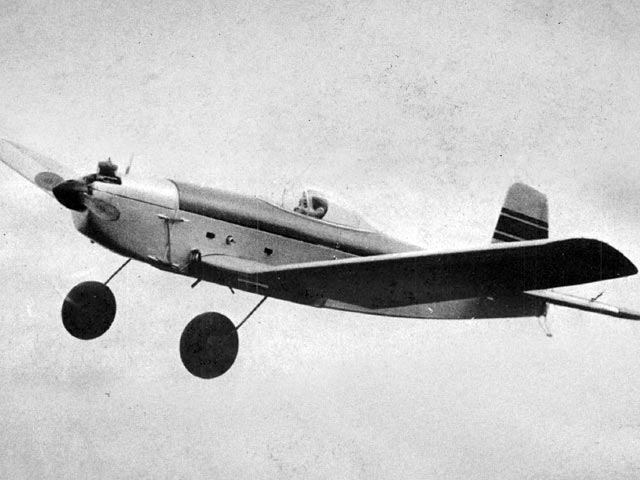