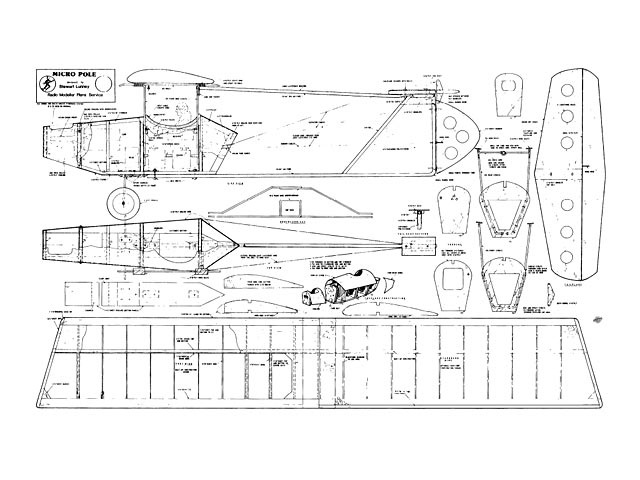 Quote: "An unorthodox model with a friendly character. Micro Pole, by Stewart Lunney.

Have you ever tired of looking at those box type trainers and sports models which all seem to have the same basic shape and all look the same? You have? Then read on.

Originally I fancied something that had features similar to a microlite and would incorporate some type of tubular structure, as well as the use of rolled ply, which I have found to be better than conventional type structures; adding both strength, durability and lightness. All these led to the origin of the 'Micro Pole'.

Construction: The wing (the easy bit) on my origional is made from foam and vener but you could, of course, make it a built-up wing which will make the model even lighter, and a suggested built-up shown on the plan. Be sure, however, to make the centre section strong as this has to take the strain of the elastic bands as well as the wing seating mounts on the piano wire.

The fuselage construction (the hard part) may at first appear a bit difficult to the beginner but, with a bit of patience, and maybe some help from a fellow flier, you will produce good results.

The fuselage is constructed using 1/4 in sheet balsa for the base formers with three of them having 1/32 ply strengtheners. Rolled ply of 1/32 in is used to make the cowl, fuselage mid-section and rear section.

Start by cutting the base out of 1/4 in balsa and mark on where the formers will go. Next cut the formers, remembering that the wing piano wire will be attached 4 and 5.

On the engine bulkhead I used 1/16 ply doublers and 1/32 ply on formers 4 and 5. Remember to drill the three holes for the fuel tank pipes to come through..." 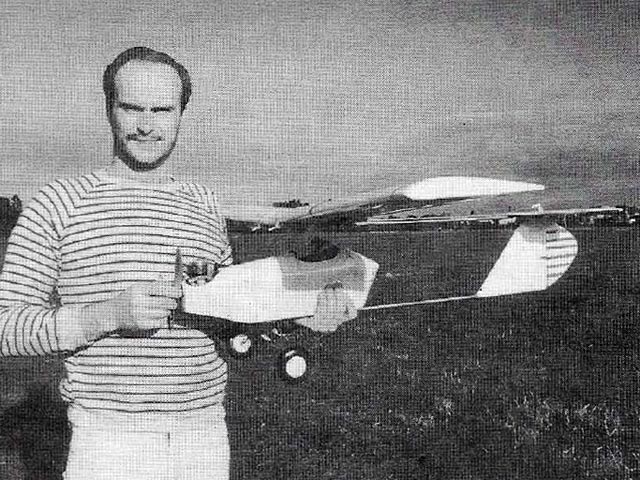 Curious there is no mention of the Dormoy Bathtub, which clearly was the inspiration for this design.
SteveWMD - 11/07/2019
Add a comment