Quote: "Looking for an eye-catcher, fun to fly, easy to build and economical too? THIS IS IT! The Sweep-Tube has the 'Bent Wing' look of the Century Series Interceptors. Basic material cost amounts to less than one dollar. A toilet tissue roll tube, two paper tubes from wire trouser hangers (you might look in your waste basket), a little balsa wood, plywood, piano wire, tissue and glue then you're in business.

Let's get under way. Cut two pieces of 3/16 dowel 13-1/2 in long, so that the ends are cut at a thirty degree angle. Also cut two pieces of 1/4 dowel and two pieces of 1/8 dowel in the same manner. Using the plan as a pattern, trace the following parts on 1/16 sheet balsa and cut out: 12 wing ribs, 2 rudders, a horizontal stabilizer and elevator. Cut five discs from 1/2 plywood so as to fit snuggly inside the toilet tissue roll tube (hereafter called the fuselage). Leadout guide, bellcrank, and control horn can be cut from 1/16 plywood.

Form the landing gear according to the pattern on plan using 1/16 piano wire. Using thin wire or thread, bind nose gear to one of the 1/8 plywood discs as shown on plan and glue another disc to it. Clamp with clothes pins and set aside to dry. This is the motor mount and nose gear assembly. Locate the two discs inside the fuselage tube as shown and glue in securely.

Locate the last disc in the tube flush with the end and glue in. Lay the tubes from the trouser hangers and the fuselage over the plan and carefully mark the location of the leading edge dowel, spar dowel, and the trailing edge dowel.

Don't forget they are on a thirty degree angle. Drill appropriate size hole on thirty degree angle in the trouser hanger tubes (hereafter called tail booms) and in the fuselage. Slip re-spective pieces of dowel through the tail booms holes (do not glue). Pour glue into the holes in fuselage, pre-glue respective ends of dowels and slip into fuselage. Lay over plan and block up where necessary for proper alignment and allow to dry thoroughly.

When dry, remove and drill 1/16 holes where shown for main landing gear. Notch inside end of booms to receive the horizontal stabilizer. Also notch top tail end of booms for the rudders. Be sure to note offset angles. 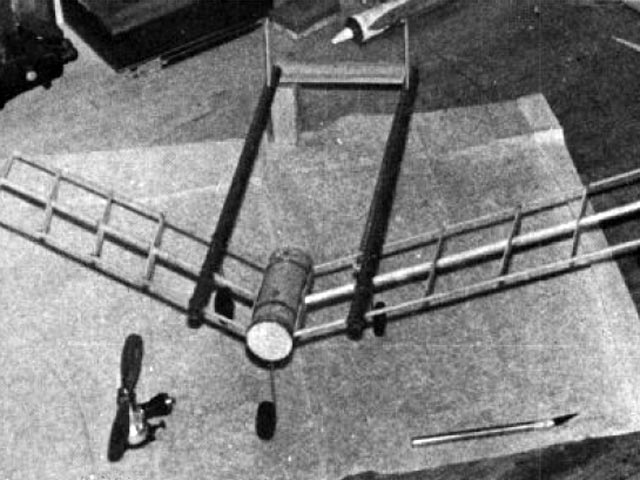