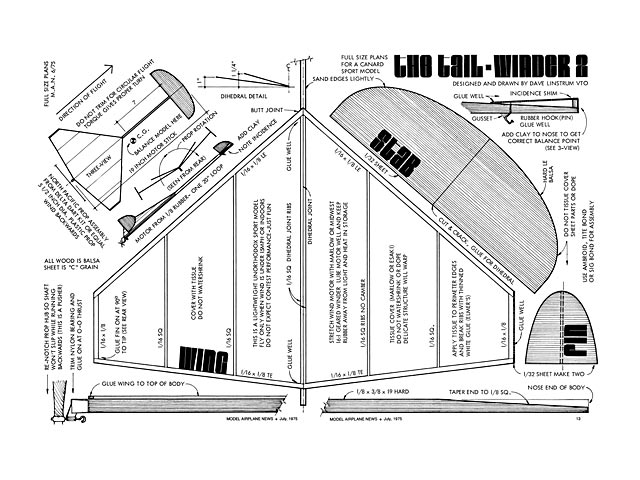 Quote: "VTO's number one man takes time out to make a machine that's a bit different. It's a Canard, a tail first type that theoret-ically is cleanest and most functional aerodynamic configuration. Tail Winder 2, by Dave Linstrum.

In case you didn't know it, canards are very much 'in' these days. Doug Joyce with his perennial FAI Power ship would be the first to admit that he does not have many companions with canards, but they are coming back, as such as the Great Gatsby. Which is appropriate, since twin pushers, the canard of the Thirties, are very much tail first machines.

Full scale aviation also gives evidence of the popularity of this unorthodox 'backwards' configuration. The XB-II which set the new record from New York to London of 2 hours, 55 minutes is a canard; so is the XB-70 bomber design. The home-built Vari Viggen (designed by Californian Burt Rutan) is a canard modeled after the Swedish SAAB Viggen fighter. The Vari Viggen also has been flown as an R/C model with considerable success; in fact, the model was the prototype for the full scale version. Finally, we all remember the brothers Orville and Wilbur. That bird that emerged from their bicycle shop to fly over Carolina sands was indeed a canard. Need we say more to convince you that tail first is first rate?

A couple of years ago, we were inspired by an article in a Swedish model magazine to build a small, lightweight sport canard. It was designed to use a Delta Dart prop and require very simple building techniques. We had a lot of fun with it, mostly flying it in the street or in the small park behind our house. Then when we moved to Florida, it was destroyed. The movers packed it in a box with heavy objects. They might as well have put it in a compactor!

Finding ourselves in Beirut with precious little in the way of modeling material, we decided to give the design another try. We did have a North Pacific plastic prop assembly, pirated off a Delta Dart (oz7931) we brought with us. There is not much else required, so we suggest you consult your scrapbox inventory after you have pirated the prop (North Pacific Skeeter is also a potential source of supply).

This model is almost as easy to build as a Delta Dart. You can even use the 'build-on-the covering' technique if you tape tissue down over the wing plan, after covering it with a tightly stretched sheet of plastic wrap or..." 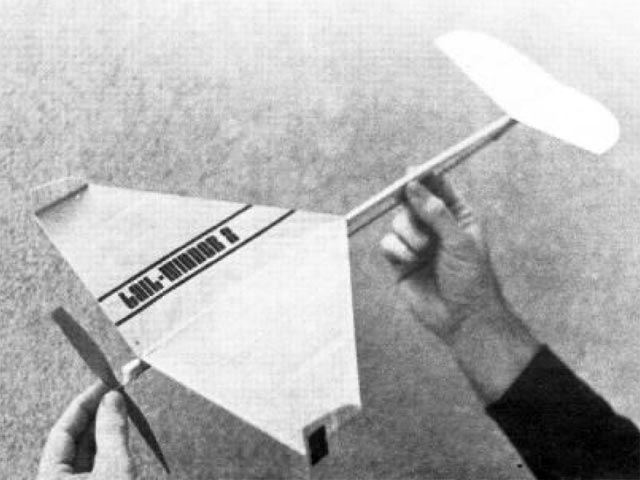