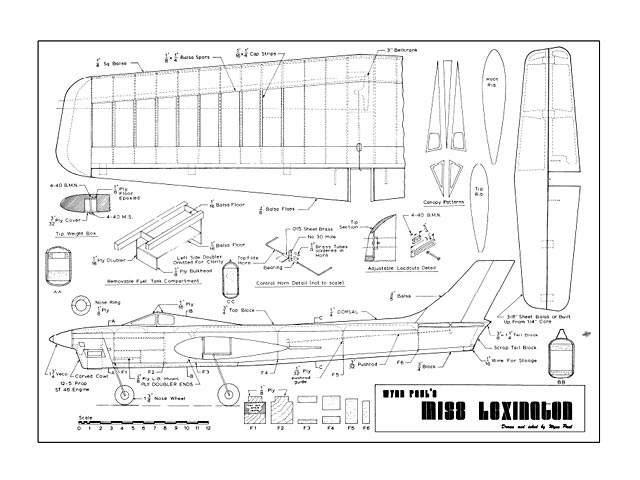 Quote: "We predict that this design is destined to be a classic in its own time. Miss Lexington USA, by Wynn Paul.

In 1967, I took my University of Kentucky swim team to Gainesville, Florida, for the Conference Championships. At the airport, sitting in the middle of the field, was a Corsair F4-U fighter in flying condition. The asking price was $5000. I returned to Lexing-ton determined to raise $100,000 to put the Corsair back in shape, find a pilot, name the ship Miss Lexington, and take it to the National Air Races. A pilot and an ex-Corsair mechanic were found but I could raise only about $50,000 in pledges, and that wouldn't have been enough to win.

In 1972, my new stunt ship was ready for trim and lettering. If I couldn't take a Miss Lexington to Rena, I could at least take one to the Nationals. So much for the name. How about the airplane?

Having at one time or another tried six of the popular engines on the market, the ST 46 impressed me the most. An ST 46 really pulled my Mirage in the '71 season, until it wore out after about 200 flights. In addition, some of the 'stars' were using the 46, and it seemed to run with a minimum of trouble for nearly everyone.

Figuring on an engine size of 46, I wanted a plane with a wingspan of about 56 inches, as aspect ratio of about 5:1, with about 625 sq inches (including flaps). Aspect ratio is defined as the ratio of the span to the average chord, or, with complex wing shapes, the ratio of the square of the span to the area. After drawing up a wing to this size, I incorporated flaps that were 13% of the wing area.

Although not available when this plane was designed, a table of comparative stunt ship sizes drawn up by John Blum and published in the August 1973 issue of MAN could prove very helpful in design. Before this appeared, I had my own table which listed most of the competitive stunt planes in the past five years.

Miss Lexington's wing has a leading edge sweep of 1-5/8 in (against the Nobler's 2 in). Not much has been said about sweep, other than that it helps in flying. One thing is certain: Make the leading edge rounded and not too sharp - most of the good fliers will go along with this. I used a customized A-Justo-Jig (rcl1044) on this wing (it was shimmed and trued up by John Peck); I have also used a jig made of 3/8 round aluminum tubes on a homemade fixture. Either works, and is a big help in building true wings.

The wing center line is 3/4 in lower than the engine thrust line. This is about as much as you would want to go, and a lot of competitive airplanes have less. The stabilizer position is 3/4 in above the thrust line. This position also changes with various individual designs. Another item is how far apart the leadout guides are spaced. Some say that a distance over 3/4 in causes yaw problems. Most airplanes which I have seen have the lines about 5/8 to 3/4 in apart.

Most of the dimensions were a compromise from some of the airplanes that I have observed at contests, or have actually flown: I've had the privilege of flying several of McFarland's Sharks (oz4557), a Gieseke Nobler (oz10588), Al Rabe's Bearcat (oz5171) and the Sea Fury. Some of my design ideas worked, and some were not so good. I'll cover both as we go along.

The canopy design is from the F-106A, of which there is an example at the Dayton Air Force Museum - no bubble canopy with hot and cold running instruments, and Playboy magazines on the rear deck. Be certain to glue all the way around the windows to keep dust out.

Anybody who follows auto-mobile or unlimited airplane racing knows that the crew is constantly making adjust-ments on the machine for handling and speed. For years, we watched stunt planes which had to be literally cut apart to make adjustments - not so now, and certainly not on Miss Lexington. Adjustable leadouts, tip weight, nose weights, removable fuel tank, and, of course, adjustable handle and lines are now standard items.

If some manufacturer would just make a strong, dependable, and adjustable flap horn so that we could turn in degrees of flap differential, or make easy elevator and flap travel changes, it would be the greatest thing in stunt since foam wings. I've seen too many Kwik-Links break..." 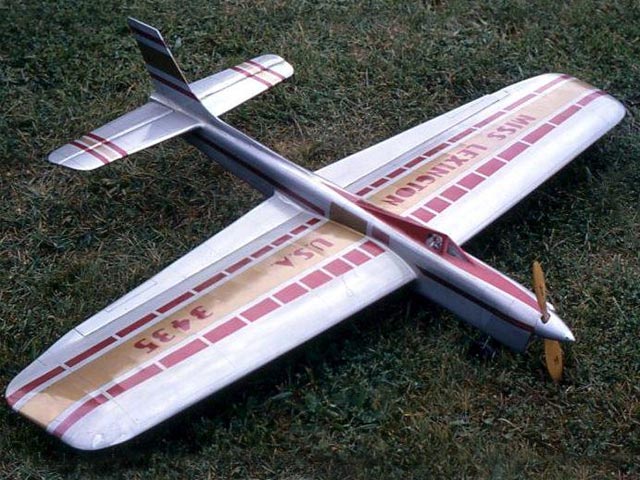