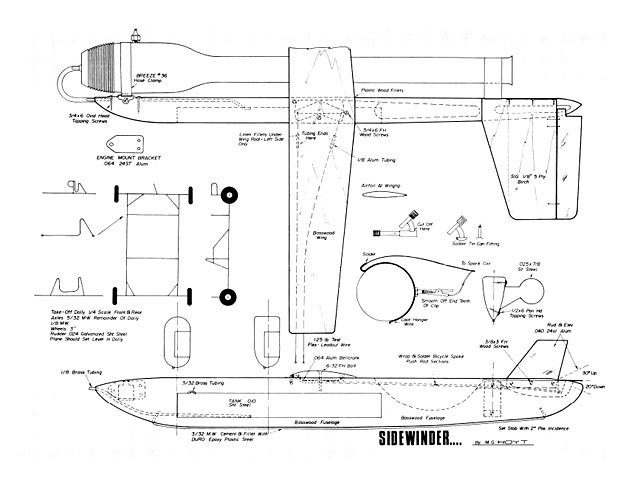 Quote: "Another in the series of MAN's Nats winners; this one in the 'Blowtorch' field with practically a clean sweep at Chicago; holds National record for jets at 185.62 mph and has hit 190. Sidewinder, by MG Hoyt.

Nineteen years of bad dope and foul-ups; now at last I'm started. It starts on the second pump every time. All the problems I've seen with starting and take-off did not show up for me. This from Navy man Pat Carroll concerning his experience with CAT jet thanks to the fine article, 'Jets the Thereputic Way' by Maury Atmore and Ken Juszkiewicz in the April MAN. With a green pit crew, they followed the instructions and Pat had his first speed plane in the air.

Far from being an isolated case, this report is typical of the many we have received. As another writer put it: After we got over being terrified of it, things went off just the way the MAN article said they would.

For seasoned speed fliers there is an entirely new sensation with that roaring dragon out there on the end of the lines. Mike and Jack Olson, of Fargo, North Dakota, for example, flew all classes of speed. Not long ago they started flying jet, and now have little time for anything else. Last year Mike placed first in Open at the NATS with his Sidewinder. Jack held the Junior record with his Sidewinder, then turned sixteen and promptly hung up a new Senior record.

A pulse jet engine for model planes has certain peculiarities which can cause the modeler a lot of grief. It develops maximum power when the fuel mixture is correct just as a reciprocating engine does. It will still run, at a power loss, when too rich or too lean. When rich, the slightest bump or jerk will cut the engine. When the mixture is lean, the engine will continue to run when sub-jected to rough treatment. However, when the plane is airborne and picks up speed, the ram air entering the intake causes further leaning of the mixture and the engine cuts due to fuel starva-tion.

The Sidewinder was designed to take advantage of these characteristics. It makes a take-off in a lean condition, and as it picks up speed, centrifugal force feeds more fuel to compensate for the increased fuel requirement.

Although a jet engine is about as selective as an old garbage can when it comes to fuel, and can he made to run on almost any liquid hydrocarbon, some fuels do work a lot better than others. The first tests of the Sidewinder demonstrated that ordinary fuels did not have a sufficiently broad combustion ratio. The Sidewinder would start and take off easily, but after one or two laps, cen-trifugal force had enriched the mixture to the point of flood-out. Our next problem was to develop a fuel blend that had five primary characteristics:

1. Safe (there are many fuel additives that can literally cause you to lose your head).
2. Extremely broad combustion ratio.
3. Easy starting.
4. High power.
5. Reasonably economical.

The result was a non-petroleum based fuel which has been higjhly successful for the Sidewinder, and, with different proportions of the same ingredients, for conventionally designed planes..." 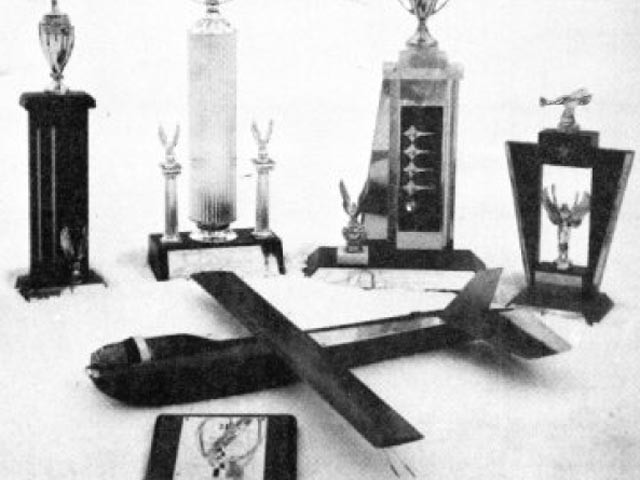