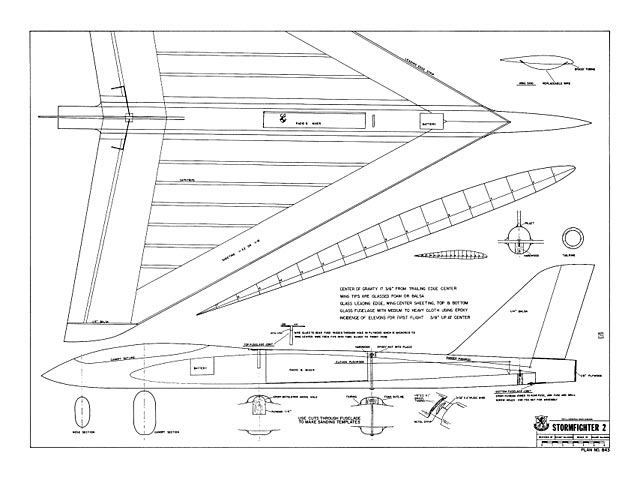 Soaring along the rugged coast of Southern California is an exhilarating experience. The vast expanse of ocean, scalloped cliffs, and sky, invite you to weave them together with the harmonious patterns of your responsive model sailplane.

The precise feeling that a powered ship gave, was something that drove me to experiment to see just how close one could come with a slope soarer. Dissatisfied with both the price tags and design of most advanced kits. I began researching and finally building my own ships. I first experimented with a few conventional designs, including some with wing loadings that could only be measured in pounds per square inches. Then the concept of the delta wing lured me into a great deal of research and testing, with the Stormfighter 2 as the end result.

Characteristics: SF2, and deltas in general, have certain flight characteristics that are unique to them which makes them much easier to fly than one would imagine. They can handle a lot of wind without having to weigh a ton, with exceptional penetration in strong wind. The delta is basically a flying wing with the elevons acting as the tailplane.

SF2 performs very fast rolls that track precisely, and has a basic stability in flight that is almost comparable to conventional dihedral. This stability exists in both upright and inverted flight, and even allows SF2 to be flown with rudder alone. Way back when radios were quite simple affairs, powered deltas flew successfully with rudder only, at least as long as the radio worked all right, according to the old timer who told me. This stability gives a predictable honest flight in spite of the wild and racy appearance.

Once, to find out how great this inherent stability was, I constructed a delta without a fuselage. I continually kept reducing the rudder area, ending up with so little area, that it was really nothing more than a keel about 1 in high on a 35 in span model. Only then did it display the familiar heart thumping flight characteristics some of us have perhaps helplessly witnessed now and then - but it was still flyable!

The onset of the stall in this and all deltas is very slow. So slow, in fact, that one has to watch closely for it. It will not display the usual nose-up peak, but rather will lose airspeed, become sluggish at the controls, and the nose begins to point up. At the onset of the stall the lift seems to break down gradually from the tip inward. This stall pattern in deltas comes in very handy when landing in a small area, as I do (30 to 40 yards). With some practice this delta can he made to mush down in a nose-up attitude, barely even flying. All one has to do is to keep the controls alive, watch for turbulence, and keep up minimum airspeed.

Wind tunnel tests have been made on various delta wing shapes by modelers in Germany (if you read German, here is the book: R/C Deltamodelle by FH Leisten, Neckar Verlag). They discovered that the delta wing has an elliptical lift distribution, meaning that it gives a very small amount of induced drag. It can be as much as 10% less than a conventional swept back wing. This is why I was able to design SF2 with a back sweep of 27°. A conventional wing that is swept back like this does not give sufficient lift for a soarer. It has to be a delta. So I got both: Sufficient lift for the slopes, and the speed performance of a very pointed wing.

Speed is one of SF2's strong points. If the wind really blows, the fun begins. With increasing speed, the handling and tracking improve. SF2 has a wing loading of around 10 oz/sq ft, which is plenty for a lot of wind. I flew SF2 in 40 mph winds without ballast, and didn't feel the need to add any ballsat. Above that you can add as much lead as you dare, but be ready for some high speed passes that will make the old adrenalin flow.

Flying SF2 is not for beginners. But if you can handle ailerons reasonably well, you won't have any trouble. However, don't fly it in a storm until you have become familiar with its characteristics. Otherwise you may end up distributing this beautiful ship all over the landscape. The building instructions are not meant for beginners either. So I'm not going into every detail. The design is straightforward, and anyone with some some building experience should he able to follow just from the plan.

There are several innovations in this design which allow for smooth flight, compact disassembly and, lastly, quick repair, if such a thing is ever necessary for you! With the last point in mind - the main criterion in my designing it, apart from flight performance and pleasing looks, was strength. SF2 is the result of-my coping with a very small landing site, heavy-turbulence, and a short attention span during downwind approaches. That's why in its coonstruction I suggest using heavy glass cloth combined with epoxy. This combination lives toughness and strength to the fuselage... "

Note this plan has a couple of issues. The low res scan used as the basis for this planfile had a central band missing - and that area has been re-created from scratch. Some guesswork was involved. Advise caution.