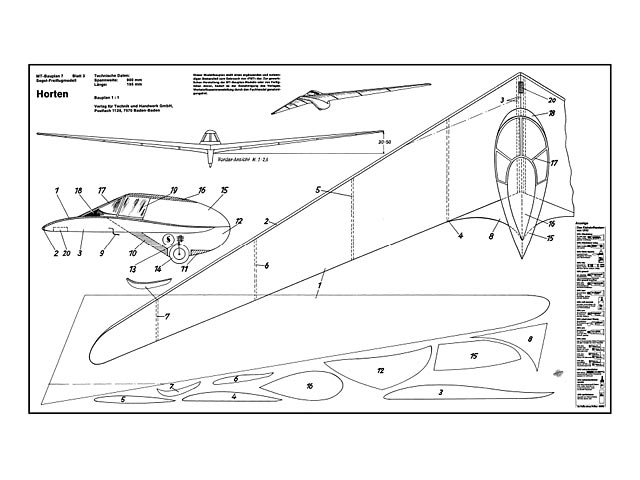 The subject Horten H.IV was a 1940s German tailless flying wing glider, of which 4 were built. 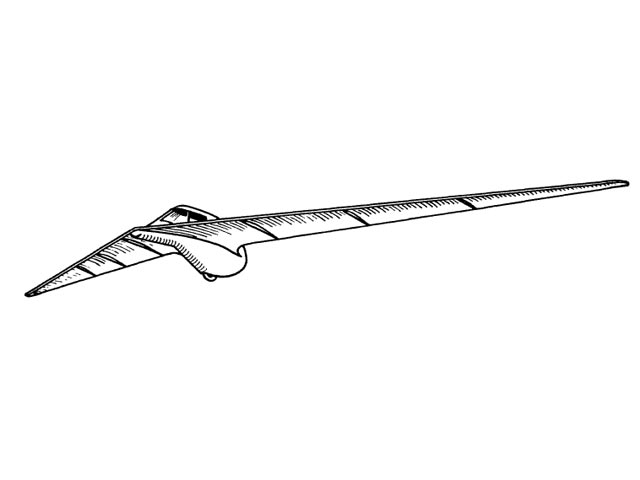 Many thanks to Rich for pointing out this is actually a scale model.
SteveWMD - 09/07/2019
Of course it is a scale model, but using a Jedelsky construction on a Horten design would be an acceptable motive for murder. And this being a FMT plan would make it treason too :-) At least plank the wing under surface as well! For more on the Horten Brothers and other flying wings see the old but still great website at twitt.org, it has nothing to do with a certain piece of software.
Miguel Morao - 09/07/2019
I don't think this is a Horten IV. Canopy is wrong and aspect ratio too low. I think it's probably either an XVc or XVI. More info at nurflugel.com
LR - 24/09/2019
Maybe Miguel would be happier if it was sanded out of a nice piece of c-grain and had the washout put in by soaking and drying. This would, of course, need a lot of washout.
Lincoln - 04/11/2019
There are many ways to skin a cat, Mr Lincoln, and I'm afraid this wouldn't be my favourite method, I'd follow the classic ribs and spars path instead. The Horten IV was a fine glider, it's glide ratio could reach 40:1 and there are quite a few full-size replicas flying today. Even so it appears to me that this scale glider is too small at 36" to worry much about fidelity, if it flies well it will surely look well, Jedelsky or no Jedelsky.
Miguel - 05/11/2019
Greetings, Somewhere out there is a Horten flying wing plan that appeared in Air Trails magazine, I think in the late ‘40s. It used a built up construction, with lots of washout and a big airfoil change across the wingspan. It generally resembles the Horten IV, though as I recall, the article admitted that the aspect ratio had been reduced. I don’t know if it was ever available as a full-size plan. I think it only appeared in the magazine in the’40s, and again in the’70s, in the Air Trails plans collections. Maybe I or someone else can find it at rclibrary.co.uk. It might be a worthwhile add, at least as a link.
Let’s be careful out there.
James Hickman - 14/09/2020
OK, I took my own advice, and got lucky. The design I referred to was titled “Flying Wing Glider”, and can be found in the Air Trails Annual for 1952, page 38, see https://rclibrary.co.uk/title_details.asp?ID=2132. The article refers to the Horten designs, particularly the Horten IV. Stay curious, and of course,
Let’s be careful out there.
James Hickman - 14/09/2020
Does anyone know when this was designed or printed?
Dave B - 18/06/2021
Add a comment