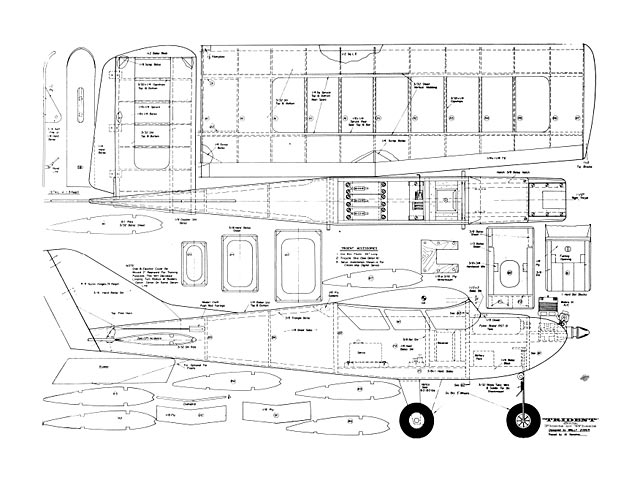 Quote: "Since the end of the second World War, our hobby has advanced at a tremendous pace. From the days of hard tube sets with escapements, through reed equipment and now the ultimate proportional control. Along with these advancements there has been a great return to the hobby of many former model builders. This was my reason for designing the 'Trident.'

Let me give you a typical example of one of our returning brothers. I'll call him Clyde for a choice of a better name. Clyde has been away from model building for some twenty years. He now has a son who is a model builder. One day Clyde Jr talked pop into going to one of the local R/C contests. Clyde is hooked immediately. The sight of those swept wing jobs, the biplanes and alas those super scale models was too much for our boy. He watched these machines fly with such ease and grace that his fingers were itching to hold the controls.

That night Clyde argued the better half into letting him tap the egg money so that he could renew his childhood hobby. This wasn't easy; but he used those classic lines that I'm sure we've all used before such as: Honey! I've been wanting to do this all of my life, or Just think Dear, I'd have something to do with my son, or the greatest one of them all: Now look Honey, I could be out with the boys at some local pub. Our boy Clyde has made his point with the better half, so with check book in hand he heads straight for the local hobby shop.

Bill, the owner of the hobby shop tries to convince Clyde on the proper approach to R/C. He tells Clyde that even when learning to fly a real airplane, one must start out in a trainer. But Alas!, his efforts are all for naught. Clyde wants one of those 7 foot four engine B-17's with full house controls, plus flaps, rotating gun turrets, retractable landing gears and bomb dropping capabilities. His logical reason for this choice was that he used to be a waist gunner in a B-17. As a back-up plane, he chooses a sleek swept wing high performance contest machine plus one full house proportional set.

Well you can almost guess what's going to happen. Our boy will work like a dog to finish his flying machine and probably do a good job building and finishing it. The big day will come and he will take his trusty bird down to the local flying site. With a little luck, smiling Gene may be there to give Clyde's B-17 its maiden flight. Every club has a smiling Gene. This guy is the back bone of R/C flying as far as getting novice fliers into the air. In a way you have to feel sorry for this guy as he gets so wrapped up in flying other peoples planes that he doesn't have a chance to fly his own.

Smiling Gene looks this new monster over with its' four Webra 61 RC engines, flaps etc. All four engines scream into life. Gene checks out the controls and everything seems to work. He gives Clyde, who's been holding on to the tail for dear life, the signal to let go. The big ol' bomber races down the runway (shade of 1943) and climbs into the air. Our boy Clyde is really turned on, his machine can fly. Smiling Gene makes the necessary trim changes and the plan settles down to a nice even flight. Take the plane up to about 12,000 feet and let me try it, says Clyde to Gene.

Taking the plane to a raft height, Gene hands the trans-mitter to Clyde with the instuctions Don't over control, keep the plane up-wind and make slow turns. Everything seems to be going fine. Smiling Gene bends down to tie his shoe lace and in that short insant our lone eagle has gotten the 17 into a screaming spiral dive with all engines wide. As the nostalgic ol' bird dives to within 8 feet of mother earth, our boy Clyde cries out in panic: Gene I'm in trouble. Take the transmitter. Save my plane. Smiling Gene dives for the transmitter and makes a desperate try at recovering the aircraft, but the laws of gravity are working against it. There is a re-sounding crash and thud as both Clyde and the 17 meet ol' mother earth.

It's true, I might have stretched a point or two, but, I'm sure we've all been witnesses to a similar situation. The Trident was designed as an all weather trainer and to give good all around performance. It's a rather large plane with a Webra 61 RC engine. I'm sure no one will call it a toy airplane. It has a lot of features that make it a fun plane to fly. It's been flown on water with Gee Bee floats and on snow with skis, which are detailed on the plan. The Trident is very roomy to allow a small movie camera to be fitted into it for high altitude pictures. The radio equipment I used was the new Citizen-Ship DP-3 on 72mc.

The unit comes completely wired and ready for use. Installation was easy with this equipment. One feature that I liked very much was the wiring board. You don't have a bunch of connectors to worry about. Everything is neatly plugged in its proper place with good positive contact. The servos are fast and track well and are strong enough to ring out this 70 inch bird through the full contest pattern. I've had this equipment out in 15° weather on the snow and the equipment worked fine (no glitches).

For my powerplant I used the Webra .61 RC engine. The workmanship on this motor is very impressive. The performance of this engine is fabulous. It idles smoothly and when full power is required, the motor responds instantly. The Webra muffler does the job it was designed to do without any noticeable loss of power. The Trident, the Citizen-Ship rig and the Webra .61 RC engine make a fine combination. With the engine throttle back slightly, it makes quite a docile model to fly. I'm sure you'll have a ball with it.

CONSTRUCTION. Fuselage Construction: The sides of the fuselage are cut from 1/8 x 4 x 48 in Sig balsa (medium hard), 4 sheets required. Cement the two 4 x 48 sheets together so as to make two (1/8 x 8 x 48) inch sheets. Cut in airfoil for wing and stabilizer. Do this very carefully, maintaining the 2° positive inci-ence in the wing and the 0° incidence in the stab. Line inside of cabin area between bulkheads B2 and B3 with 1/32 x 6 x 12 Sig plywood. Doublers B2 & B3 are cut from 3/8 hard balsa sheet..."
Plan shows both skis and conventional UC gear. 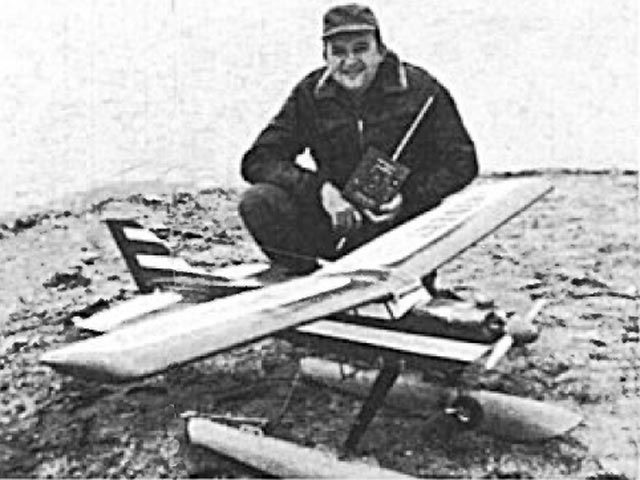