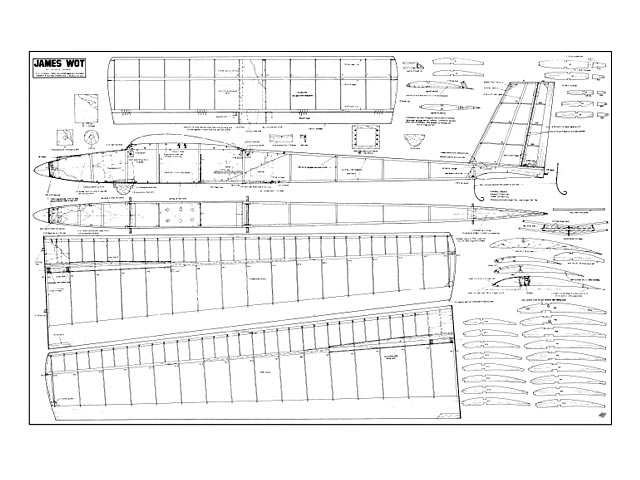 ELECTRIC FLIGHT deserves to be more popular (than it is). Perhaps this lack of attention is because the average club flyer is unaware of what it has to offer. The modeller arrives at the field without a large field box, half gallon of fuel, electric starter, etc, etc. He walks out to the field carrying only the transmitter and model. Switch on - the motor always starts first time - and away the plane goes. No need either to lay out a bungee, or find someone to tow.

A good performance is achieved by keeping the structural weight as low as possible, but with a moderate wing loading of 9-1/2 to 10 oz/sq ft. The prototype's structural weight is 12 oz and the all-up weight 2 lb 7 oz. An Eppler 385 section is used and proves to be very efficient on this tapered wing, resulting in a sinking speed only slightly faster than a good thermal soarer.

Construction. Fuselage: After cutting out the various sheet parts, the two fuselage sides are built up over the plan. Notethe use of 1/8 in spacers between the sheet parts as the two fuselage sides are built, a precaution which ensures that the sheet is flush to the outer faces of the 3/16 longerons and spacers. Fit the wing supports, F3, F4, and the servo tray, then work towards each end of the fuselage fitting the cross members, next add the 1/32 ply bottom.

It is at this stage that the motor, with its drive and propeller, is installed, also the servos, pushrods and motor switches. The air intake is supported by a strip of ply as shown on the plan. Add the remaining areas of sheeting and other details as shown on the plan. I always add a tube, made from drinking straws joined with sticky tape, to the fuselage structure, to take the receiver aerial.

On a slow flying model such as this, where the control surface loads are low, the control horns can be made from 1/16 ply and the rear ends of the pushrods from 2mm aluminium knitting needles. These are joined to the balsa pushrods by drilling a hole down the centres of the pushrod and epoxying in the needle after roughening the surface..." 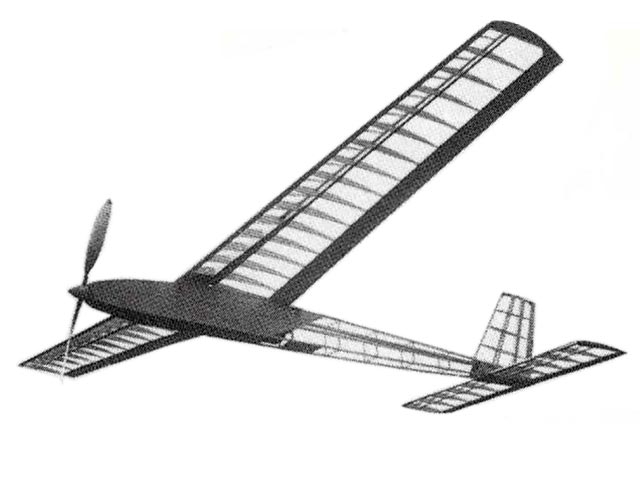 James Who? A model not to sneeze at, lest it shatters! Easy to strengthen with little effort and added weight, though :-)
Miguel Morao - 07/07/2019
Add a comment