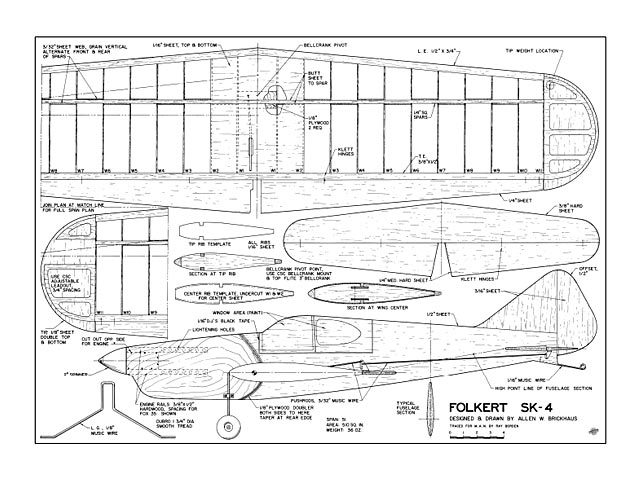 Quote: "An article by Truman C Weaver in the November/ December 1963 American Modeler captured my interest the first time I read it; it concerned the life and aircraft designing career of Clayton Folkerts. The airplane that particularly caught my attention was his last venture into air racing, the SK-4. Like the two previous planes, the SK-4 was a sleek mid-winged plane powered by an inline motor; streamlining, not brute horse-power, was Clayton Folkerts' forte in the racing business. This was proven by the various wins of the SK-3, named 'Jupiter, Pride of Lemont' over huge radial-engined competitors. The SK-4 was almost an exact duplicate of the SK-3, except for the replacement of the wooden propeller with an aluminum one, and the bright red paint scheme. It was licensed R-288Y and given the race number 15.

The color, oddly enough, was the determining factor in my choice of this model Folkerts racer as a profile stunt plane. I wanted as light a stunt ship as I could build, because the wing I wanted to use did not have as much thickness, and therefore not as much lift, as the foam wing used in my previous Flying Red Horse (oz6997) project in MAN, June 1978. A total finished weight of more than 40 ounces would not allow the plane to fly or turn as well as it should. I knew from experience that red opaque MonoKote and Hobbypoxy red epoxy paint matched almost exactly. I've learned that a fuel-proof joining of the MonoKote and Hobbypoxy paint can be obtained. This choice of color and finishing materials may seem like a lazy man's cop-out; but I did know that it was possible to cover the model with a light, extremely fuel-proof finish. As we all know, weight is one of the most important factors in trimming a competition stunt plane.

My dedication to lightness also prompted the choice of a muffled Fox .35. The Fox will pull this plane through the pattern with no problem, even with a muffler. I wisely chose to keep many of the adjustable features used on the Fly-ing Red Horse, except for the rudder. The wing used for the Flying Red Horse project had a shallow leading edge sweep which might cause some yaw in turns if not dampened by the Rabe-style rudder. The wing chosen for this project, despite its thin airfoil, has more sweep and tends to allow less yaw.

I also reduced yaw by reversing the bellcrank position. In normal setups, the front line is the 'down' line and the back line is 'up.' When a control-line plane receives an 'up' input, by pulling on the back line, it will yaw outward because the pivot point for that maneuver is on that line. When the opposite control input is given (a pull on the front line for 'down'), the plane will yaw slightly inward because the pivot point has effectively been brought forward to that line. When the bellcrank is reversed and the pushrod is on the inboard side of the wing, the front line becomes 'up' and the back line 'down.' Stunt planes always seem to lose line tension when a down input is given. Thus by moving the down control to the hack line, the plane will yaw slightly more outward during that movement and solve some of the line tension problems. The opposite yaw does not seem to impair the inside maneuvers when the 'up' or front line is pulled because those maneuvers have more line tension anyway. A CSC adjustable leadout was purchased from Bob Hunt. It is an excellent product, as are all the items I've bought from them. It is also a lot easier than building one.

The adjustable tank setup is an idea I've stolen from one of Jim Lynch's pro-file stunt planes. It utilizes a stock 31/2- ounce Clary tank (I guess now a Fox item, but I can't keep up with the brand names anymore), with two brass straps soldered to the backside. Slots are cut so the tank' can be bolted to the fuselage and adjusted in height for a proper motor run. I also recommend muffler pressure to the tank for a more even run throughout the pattern. When using a stock baffled tank, as this one is, you should run the muffler pressure line to the overflow tube on the bottom of the tank. This air being pumped gently into the tank must enter the airspace at the top of the tank as soon as possible. A more constant needle setting will then result from the beginning to the end of the motor run. If you prefer a pattern run that is less lean at the end, I suggest that a uni-flow tank be used.

Construction: The wing should be first on your list of items to build. As it is drying, your time can be spent carving out further needed parts. Make center and tip rib templates from 1/8 plywood and bolt twice the number of 1/16 rib blanks necessary for one wing side. Sand to shape and do the same for the other side of the wing. Choosing every other rib, separate both stacks into two complete wing sets. You now have enough ribs for a biplane. The advantage of this method is that it gives, you a set of ribs with very little edge taper..." 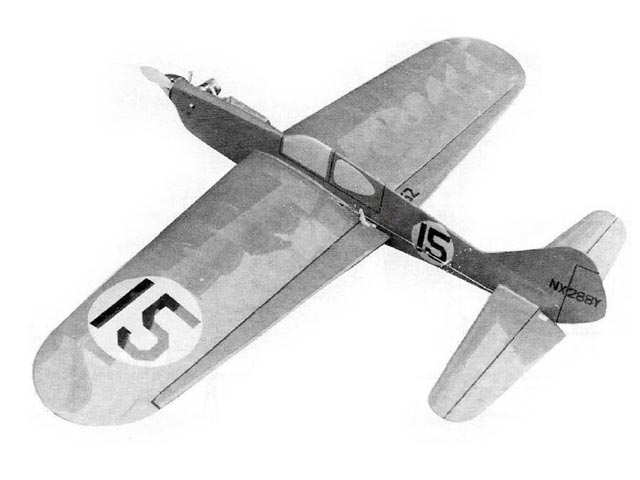