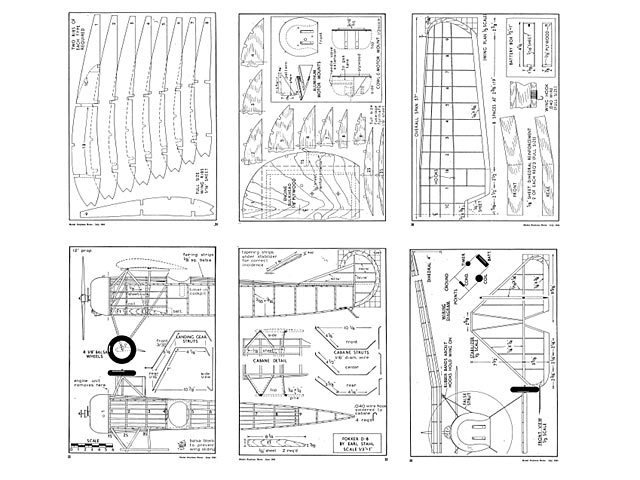 Quote: "Fokker D-8 Flies Again. A Realistic Gas Model of a Famous World War I Fighter That Performs Like a Contest Plane. By Earl Stahl.

DURING the closing weeks of the first World War there appeared over the front lines a nimble little monoplane that is generally credited as being the finest fighter of its day. This was the famous Fokker D-8 of the German Imperial Air Force. Powered by a rotary Oberursel engine of 110 horsepower, the D-8 had a speed of 115 mph. It climbed at a rate of 1,500 ft per min and could ascend over four miles. In the ability to maneuver and dive it was unexcelled. So superior was the performance of this ship that it would have been a tremendous blow to the Allied air forces had any great number been completed before the war's end.

In selecting a design for a flying scale gas model one can scarcely find a better subject than the Fokker D-8; for here is a plane with aerodynamic proportions similar to the majority of contest models. A very short nose combined with a long tail moment arm, tail surfaces of proper proportions and a parasol wing of generous size, all contribute to the model's stability. In construction the D-8 is extremely simple and practical and anyone who has built rubber or gas models with success should experience little difficulty in duplicating it.

Our model Fokker D-8 was designed to fly successfully with any Class B engine; however even the smaller Class C power plants should prove satisfactory. The wing span is 57 and the weight with intermedi­ate size batteries is 28 ounces. This makes the wing loading about eight and one-half ounces per sq ft. An inverted Ohlsson 23 swinging a 12 inch propeller was used to power the original model.

How does it fly? Well, test flights were conducted high in the snow-covered moun­tains of Pennsylvania with the temperature uncomfortably below freezing. With the regular 20-second engine run, flights of one and one-half minutes were made, which is certainly not bad for a scale model. Entirely unassisted the little ship lifts from the runway after a short run and eases into a fast circling climb. Under power the circles are to the left and at the top of the climb it rolls-out into a flat, level glide to the right. Under more favorable flying conditions it should give an even better account of itself, since it attains enough altitude to take full advantage of rising currents.

Before construction can be started, it will be necessary to enlarge some of the plans to full size; with the exception of the full size fuselage formers and wing ribs most parts are shown one-third full scale. Obtain a large sheet of ordinary wrapping paper and scale-up the plans to actual size. A pair of draftsmen's dividers will simplify the task since it will only require stepping-off each dimension three times. When duplicating the side view of the fuselage, the top line of the upper longeron should be used as the reference line since it is straight. In duplicating curved parts such as the rudder, draw squares of the indicated size and then draw the curved line through the corresponding positions. Now for the actual construction.

Fuselage: The fuselage is of standard construction. Build two side frames using ROCK HARD 3/16 sq balsa for the longerons and cross pieces. Build one side atop the other to insure that they will be identical. When the sides are dry, remove them from the plan and turn them up-side-down over the top view. Pin them the proper distance apart and cement cross pieces to place, being careful to keep the whole structure lined up evenly.

Fuselage formers come next. Make complete paper patterns of each and then cut them from 1/8 sheet balsa. Two each of formers 1S, 2S and 3S are required. Cement the formers to their respective places. The fairing strips are medium grade 1/8 sq. balsa. It will be noted that many of the formers lack notches so when this is the case, the fairings are cemented directly to the sides as shown. The cockpit is made of 1/16 sheet. Cement several sheets together so the stock will be wide enough and then cut out the center to the shape indicated. The cockpit piece is then fitted accurately into the space between formers No.4 and No.5 and cemented fast.

The tapering strips that give the stabilizer its correct incidence are shown on the plan. They are 3/16 wide and taper from 3/32 to zero. Two are required and they are glued to the fuselage with the 3/32 end at the rear.

Landing Gear: Landing gear struts are formed to the size and shape shown. 3/32 diameter music wire is used for the front strut while 1/16 diameter wire is used for the rear. A vise is very helpful for bending the wire but heavy pliers can be used if necessary. Bend the struts accurately and note how the rear one is bent to join with the front.

The struts are solidly attached to the fuselage structure - the spring of the wire being sufficient to absorb the shock of landings. Use strong thread or light twine for the purpose of binding the struts to the cross pieces and longerons, and then apply several coats of cement. The 3/16 sq diagonal ones shown on the plan are ce­mented to place once the landing gear is attached. Join the two landing struts with solder. Two F-1 reinforcements are cut from extremely hard 1/8 sheet balsa; cut the several notches so they will fit accurately over the cross members of the fuselage and landing gear wires. Cement these to the bottom longerons and uprights to strengthen the fuselage.

Fairings on the landing gear struts are simply soft strips of 1/16 sheet balsa, attached to the wire by strips of tissue wrapped spirally around both. These should not be attached until the fuselage is covered, however.

Because of the unusual size and shape of the wheels it will be necessary to make each of them from three discs of very hard 1/4 sheet balsa that have been laminated together. If the builder has access to a lathe it will help, but the wheels can be shaped accurately with a sharp knife and some sandpaper. Bushings of some sort must be used to permit free and accurate turning. If the wheels are covered with silk they will be greatly strengthened.

Wing Mount: While construction of the wing mount is not difficult, it must be made with the greatest of accuracy. The three cabane struts are shown in detail and all are made from 1/16 diameter music wire. Make accurate full size sketches of each strut... " 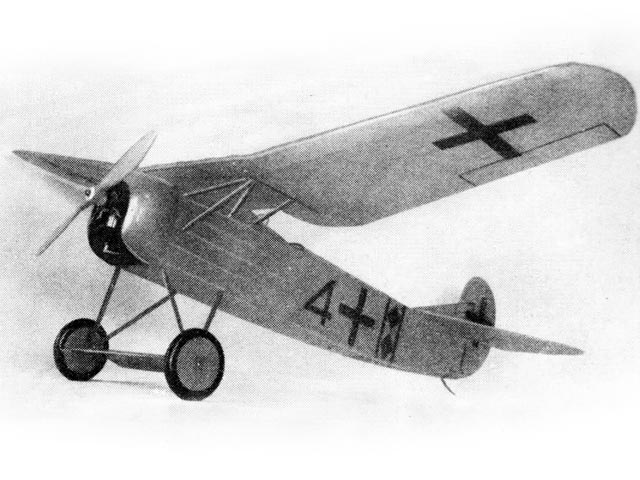 Some nice pics here [more pics 003-005] were sent in by Jiri Gwuzdz of his completed Fokker model.
SteveWMD - 15/04/2014
Hello! Another one. Here, the photos of the Fokker DVIII [more pics 009-014]. Balsa built, electric powered. 4 Functions adapted with 5 servos. It came out really really light which greatly helps it scale feeling flight. Loops and Immelmans are a must! Greetings from Benavidez, Argentina.
LucianoBilota_Argentina - 20/11/2019
Add a comment