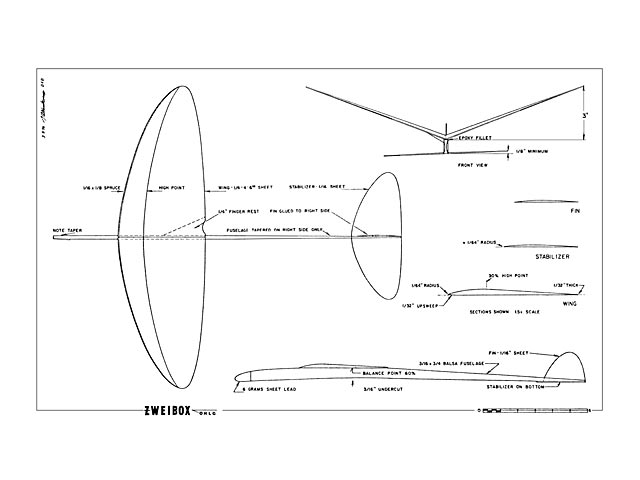 Quote: "A rationale for an Outdoor Hand Launch Glider that should turn every modeler on. A happy project for a well-defined HLG design. Zweibox, by John Oldenkamp.

When I re-entered Free Flight two years ago, I wanted to find an event that was clean, quiet, inexpensive. yet physically challenging. At 42, I was not exactly what you call your prime contender in athletics. Couldn't afford a radio set. And I didn't want to sit, anyhow, so after spectating at several meets, I decided to do hand launch.

'Doing' hand launch became obsessively masochistic - everything ached. I built and dorked just about every kit and popular plan around. I beat no one. The extravagant thrill of putting a glider in a thermal and watching it dance overhead was to elude me for many months. I should have remembered my experiences back in the thirties and forties, when all the gliders I built went nowhere. There may yet be a soap opera for modelers!

Hand-launched gliders, especially those fitted to dinosaur arms, need to be consistent, relatively light, strong and able to handle mixed air without dumping. After reading and rereading the Zaic books, plus whatever current design articles I could lay my hands on, I came up with Premise #1: No object as small as an OHLG can succeed competitively if it is designed to behave like a Nordic.

For my ego as much as anything else, I wanted a machine which would go high, move fast and bounce a lot in the process. It had to look good. These criteria indicated a model with low-aspect ratio, shortish moments, ample dihedral, etc. All of which put me at the South Pole so far as current practice is concerned. A hundred or so Zweiboxes later, however, I am convinced that Premise #1 was dead-on. My ego is intact, if not swollen, and the glider is elegant in the air.

The first three Zweiboxes departed on boomers, as did many others. Some were stepped on during overly-enthusiastic retrieval. My cats ate a few. A couple accidentally got set on fire. Most were lost before the simple flap DT was developed. The hills of San Diego County are quite literally festooned with Zweiboxes! The past two years have been joyously educational, to say the least.

The Zweibox pedigree is uncomplicated. I invoked the sincerest form of flattery for the umpteenth time by swiping the outer wing profile almost directly from Larry Renger's record-holding indoor glider, Boxy (hence, Zweibox, hence the "-box" tag given to all my subsequent glider and rubber designs. It ain't fair to steal!). The various moments were part fact, from the Zaic pages, part fiction; pragmatic.

As the glider progressed from early-on ugly duckling stage to what it now is, I gradually slimmed down the outlines, tried many tail variants, both in area and shape, finally deciding on what is seen here. My main input was to try to develop a glider that would have most, if not all, of the critical adjustments built in. The current Zweibox therefore, uses an asymmetrical fin and fuselage, stab tilt, doped-in washin..." 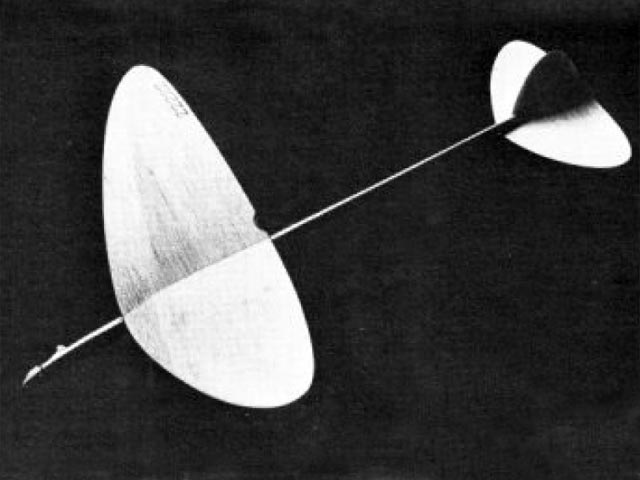