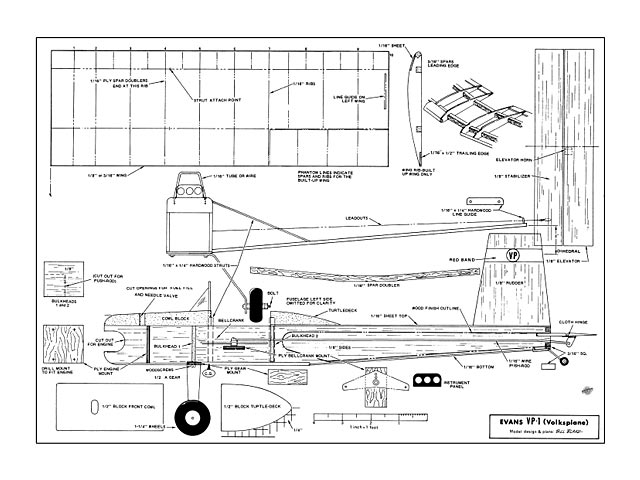 Quote: "Most modeled EAA home-built is our subject for a small, fun-giving control line that can be flown on any school field, basketball court, road cul-de-sac, just about any place, and it's a real scale bird as well! Volksplane, by Bill Blake.

Incredible? You bet! Since its conception in 1968 by a veteran aircraft engineer by the name of Bud Evans, the Volksplane has become one of the most popular home-builts to enter the picture. Called by some the ugliest airplane around, many more think it is the answer to the home-builders dream - especially those of us who want to fly but can't afford to at today's flying prices.

Since I was privileged to draw one of the first cutaway illustrations of the plane, I became very familiar with it, inside and out. It was a natural for scale, no matter what size, and that's just what the outline drawings are - 100% scale, right off the full-size aircraft plans.

We changed from a stabilator, as on the big plane, to a regular stab and elevator in consideration of younger modelers who might have trouble with a stabilator. For scale nuts, however, the hinge point for a scale stabilator is at the extreme end of the fuselage. Anyone wanting to build a larger Ukie or WC scale job can blow the plans up to any size they desire.

We have much fun flying .049 scale be-cause it's low cost and yet the airplanes themselves are so much more realistic than the usual slab-sided or plastic crate.

CONSTRUCTION. Wing: For the solid version, merely cut it to the outline shape from 1/8 in. sheets as shown on the plans, sand in the airfoil shape, block up the tips, glue together at the center and the wing is finished.

For the built-up wing, the scale spar and rib spa. dng are shown. Build the wing (one half at a time) flat on the work bench, add the sheet leading edge and sand off all rough spots. Cover with gas model grade Silkspan. Note for this wing, cutouts in the fuselage are cut to accept the spars only. Rib #1 on each wing half should fit snugly against the fuselage side. The cutouts are made at the strut location shown on the side view.

Fuselage: The fuselage sides are cut from 1/8 in sheet to the outline shown on the side view. If possible, use epoxy on all fuselage joints. Mark the location of the engine mount and bulkheads. 1 and 2 on both sides. Epoxy the engine mount in place between the sides and when dry, proceed to install the two bulkheads and two 3/16 in square pieces at the tail end. Next, epoxy in the bellcrank mount and landing gear mount followed by the fuselage bottom. The landing gear can be purchased either in blank form and bent to shape, or ready bent. (We used a blank available from SIG.)

Attach the gear with two wood screws. Glue on the fuselage top and cut the front cowl and turtledeck blocks to shape. Sand and give them a couple of coats of Fillercoat. Bend the rollover bar to shape and glue into rear of front cowl block. The instrument panel goes between the roll bar, and the windscreen covers both. If possible, mount your engine in sidewinder fashion to preserve the looks of the VP. The plans show where to cut the right side out to accept the cylinder head.

The rudder needs little explanation. Cut to shape, sand.in a nice symmetrical section and glue to the fuselage top with the trailing edge set 1/4 in to the outside of the flying circle. The elevator is just about as simple. Cut to shape, sand and join together with a strip of cloth hinge (crinoline). Glue into the slot cut in the fuselage side. Then you can install the control system... " 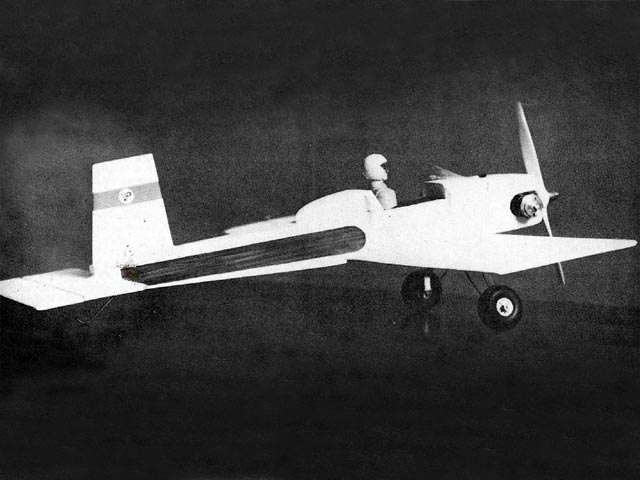