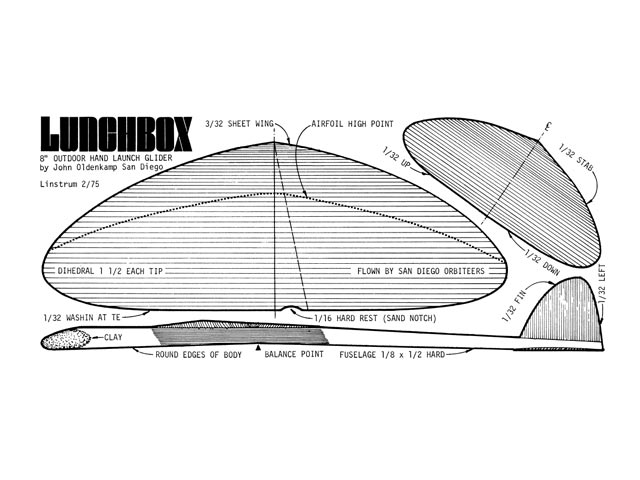 Quote: "Small, outdoor, hand-launch glider that can do it all for beginner or experienced chucker. Developed for small fry, it's anybody's bird. Author, a professional photographer, supplied the finest-ever photos, and they steal the show with their art form! Lunchbox, by John Oldenkamp.

Lunchbox started life as a placebo for my young neighborhood friends, who just didn't have it in the arm department for wrestling something like the Zweibox (February, 1975, VTO) aloft. As you can see from the photographs, the little guys certainly came along fast. These were their very first models, so the initial moves with X-actolsanding blocks were terrifying, to say the least.

Afterwards, we had an off-the-wall contest at a nearby park. When the dust had settled, 'Fast Eddie Crewcut' won out with a flight of 22 seconds. That's gotta be an eternity the first time around. Two Lunchboxes survive that session, now nearly six months ago.

Next, the big guys appropriated Lunchbox, and the results were dynamite: I lost five to thermals in a two-week period. Mike Denny, a newcomer to modeling, maxed his twice at a local contest. The plane does not meet AMA minimum wing area rules for competition, however.) Several Lunchboxes were built by various people last Christmas as tree decorations. Airplanes is airplanes, nevertheless. Someday soon, my group, the San Diego Orbiteers, will have an outdoor go with Lunchbox as part of our regular monthly contest schedule. The winner will get an irresistible salad made up from 16-lb. balsa.

The best thing about this little device has to be the very consistent and relatively tremendous high altitudes reached from launch - mostly due, I think, to the indoor-like trim settings, sweepback, generous dihedral and low aspect ratio. The glider almost always executes a little 'thank you' kind of loop at the top, entering normal glide with scarcely a bobble. Zweibox, its big brother, has the same gratifying habit. Just don't leave out the left wing washin.

So, if you are a little guy, big guy, old or young, or male or female, or bored with bologna and hard-boiled eggs, stick one of these in your brown hag or, better, lunchpail, and try it out.

Micro-mini construction hints: Use firm wood. Wing dihedral joint and wing/fuse joint should be done with five-minute epoxy. Titebond, used with a brush, double-glued, tacks the rest together. Before assembly, dope the whole works with one very thin coat of plasticized nitrate dope, then rub out with #600-grit sandpaper. Nose weight can be something edible, like Milk Duds, or you can go with the conventional clay.

Since a well-thrown Lunchhox will probably become a wee speck in the sky with any kind of luck at all, you might want to paint the wing bottom surface dark blue, black or red. Forget the fancy yellows and day-glows, they are not nearly so effective as darker, opaque colors. Dethermalizers? Everyone knows that gliders almost never disappear, unless you forget to light the fuse..." 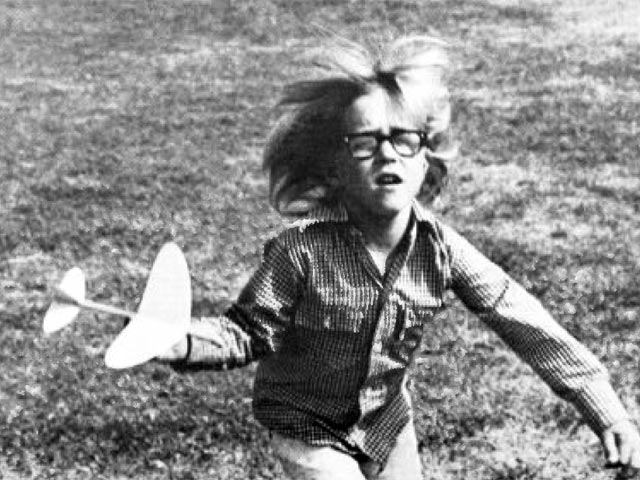 I've built a couple of these. I have some photos of my latest build which I fly in a small neighborhood park. Big fan of anything John Oldenkamp has designed.
Timthemodelbuilder - 04/07/2019
Added some lovely photos of the Lunchbox, thanks to Timothy Larson [more pics 005-007].
Mary - 08/07/2019
Hey there, I downloaded your plan and made several Lunchboxes [pics 008-011]. Super fun. Hoping to lose them to Hung, the god of thermals, sometime soon! Regards,
DaveS - 03/07/2020
I built dozens of these in the late 70's! My first OOS flight was a Lunchbox, and I lost countless more to the strong Arizona thermals. They were so cheap and quick to build, I could usually scrounge enough wood out of my scrap box to cobble one together. Since I basically had no budget for my hobby at the time, my $2.00 lawn mowing allowance went a long way with a Lunchbox.
Mark Young - 11/07/2020
Here is one of my Lunchboxes passing overhead ... feel free to crop the photos if you think they would look nicer [012,013]. Regards,
DaveS - 21/07/2020
Add a comment