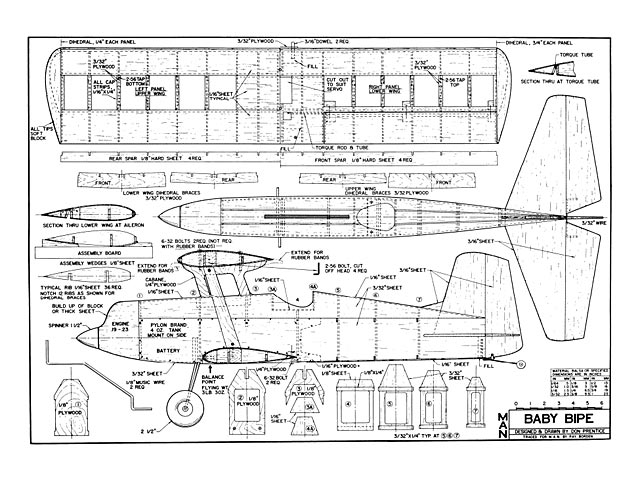 Quote: "Biplanes are an exciting part of R/Cing and this 'bundle of dynamite,' fitting small ship trend will get you in on the fun! Baby Bipe, by Don Prentice.

My concept of a small biplane evolved as a result of our purchasing a small car - a very small car. Where previously I had been able to take the model to the field in the larger car already assembled, I would now have to assemble it after arrival, a major fault of biplanes in general. Sound logic dictated a baby-sized model which would fit in the mini-car in an assembled condition - hence the design of the Baby Bipe. The prototype scaled out at a flying weight of 3 lb 3 oz, so keep it light!

Additionally, I expected this model to perform like the larger bipes, and do all the maneuvers that are normally associated with the .60 size machines, and it does in fact meet performance as well as size criteria. Biplane maneuvers can all be accomplished directly over the field.

Problems might occur due to the necessity of keeping it on the ground during high wind conditions, and there is the possibility of its tripping on grass at a field which has not been scaled down to the model's size; grass must be shoooort! With a hot .23 engine, Baby Bipe is a handful, but given less throttle, it is docile and even comfortable to fly.

Construction-wise the design is easy to build, and anyone with a minimum of tools (jigsaw) can readily accomplish it. The original plane had solar film covered wings, and the tail and fuselage were painted with surfacing resin.

Fuselage: The fuselage sides were 3/32 medium balsa, and the doubler 1/32 ply. The formers key into the doubler and sides, making for easy construction. Be careful while installing the cabane strut, as its posi-tion determines the incidence of the upper wing. This doubler is installed before the upper fuselage planking.

The plan shows two methods of attaching the upper wing, doing it with either nylon bolts or rubber bands. Which you choose has to be decided before you cut out the pylon. The motor is located on a metal mount, and the cowling is shaped by gluing balsa blocks around the motor mounting and engine, and then carving to shape. The spinner is to be placed on the engine before the cowling is carved. Complete the upper part of the fuselage and install the tail assembly, then cover the bottom of the fuselage. This will make it easier to fit the push rods..." 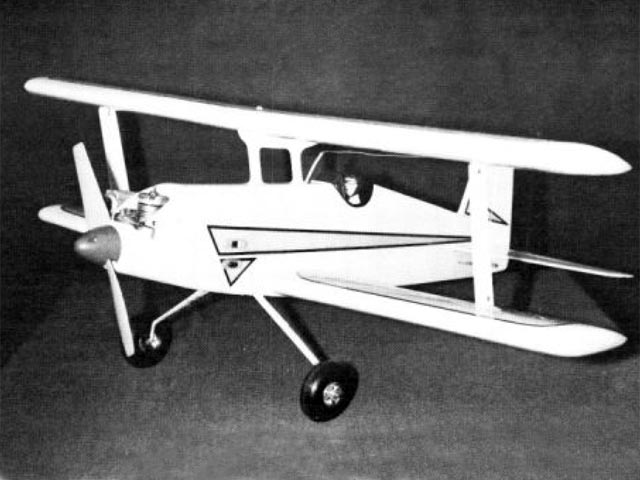