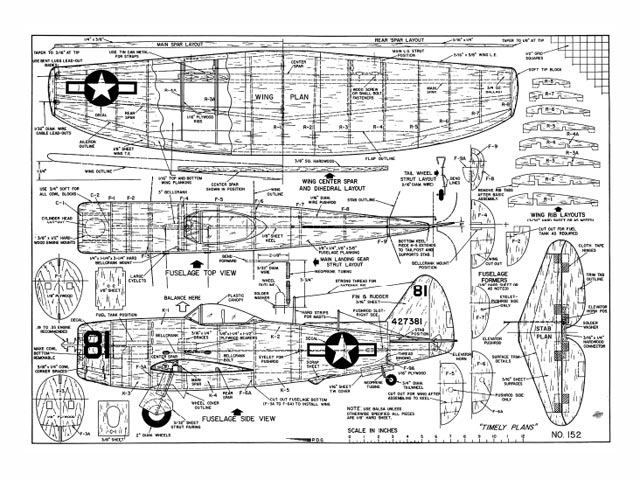 One of the great workhorse fighters of the Second World War, Republic's rugged P-47 Thunderbolt ran up a fantastic total of enemy planes destroyed - as well as countless thousands of ground vehicles of all kinds. Powered by a 2,000 hp Pratt & Whitney twin-row radial aircooled engine with turbo-supercharger for high altitude work, it was equally at home against Axis interceptors as a strafer, a tactical bomber and escort fighter.

Eight 50-caliber machine guns gave it stunning firepower. For its day it carried an 'impossible' load of bombs. With drop tanks to increase its range, it flew convoy for the Fortress and and liberators, beyond the distance at which many fighters could protect the bombers. In all, some 13,000 Jugs were built.

Despite its vaunted fighting ability, the P-47 was fantastically strong. In performance and strength, our model is in the same tradition. As functional and streamlined as its famous big brother, the model makes an ideal entry at any scale meet. It flies well on any engine of from .19 to .35 displacement, but of course, the most spectacular performance results from the bigger, more powerful motors.

CONSTRUCTION: Fuselage: From the firewall (F-1) to the stern-post, the fuselage is made from two half shells which, when joined, are planked with soft balsa strips placed side by side in the usual manner. The portion of the fuselage lying below the top contour of the wing airfoil, and between formers F-2 and F-6, is temporarily removed (before the fuselage is finished) to permit installation of the completed wing. Top and bottom keel pieces in-sure easy, accurate construction.

Cut-out and assemble keel pieces K-1, K-2 and K-3 directly on the side view plan. Use wax paper to prevent the work from sticking to the surface. Cut out all formers, noting that F-1 and F-3 are 1/2 in plywood: the others are of 1/2 in sheet balsa. Each bulkhead is separated into halves along its ver-tical centerline. Make the lefthand fuselage shell first, by cementing all the half bulkheads in position. Check their alignment with a triangle. Be sure to draw and deeply score the separation lines for the wing cut-out on F-4 and F-5.

Before going on, note that the soft planking strips are in three sizes: 1/2 in sq, 1/2 x 1/4 and 1/8 x 3/8. Most of the planking will be done with the wider pieces but, when necessary to achieve uniform fits, use the narrower sizes. At times it will be necessary to taper the strips and to slope their sides in order to fit neatly together. For now, locate a piece of 1/8 x 3/8 running from F-1 to the tail, at approximately the thrust line along the side of the fuselage. When dry, remove this half shell from the bench and attach the half bulkheads for the right side of the body and finally locate another 1/8 x 3/8 piece similar to the one on the left half shell.

The motor mounts (3/8 x 1/2 hard-wood), bellcrank mount and the pushrod must be installed before proceeding with the planking. Drill 1/2 in diameter holes for the bolts and insert hobby shop blind nuts under the mounts. (They take 4/40 machine screws or mounting bolts, a standard item.) Also position the tank with feed, fill and overflow tubing attached.

Depending on the type and size tank, it may be necessary to cut away part of the mounts so that the tank can, if necessary, be fitted between them. The bellcrank mount consists of a sandwich of..." 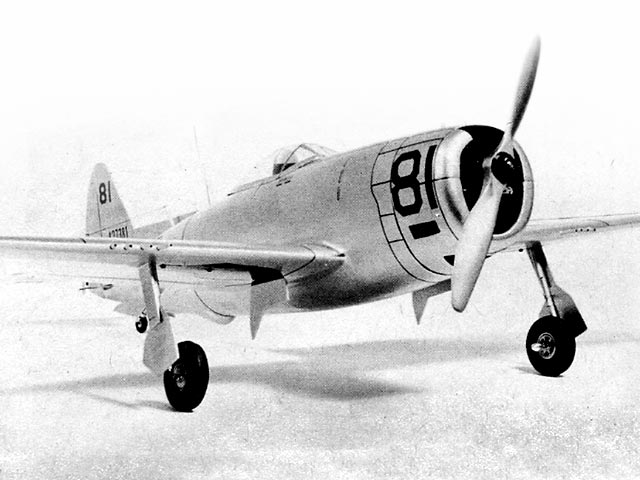