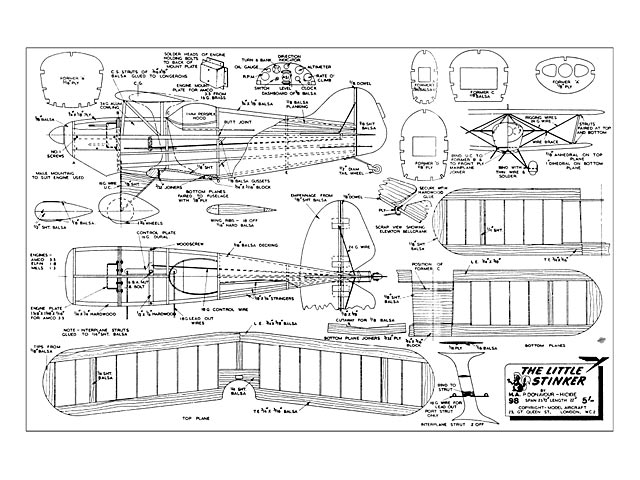 THOSE who were present at the 1949 Gatwick International Air Show will need no introduction to the 24 year old American girl from Florida, Miss Betty Skelton, and her trim little biplane, The Little Stinker. The spectacular display of acrobatics which she gave were carried out with the skill and precision which has won her international fame.

The writer was particularly struck by the attractive lines of her tiny plane and thought what a fine flying scale model it would make - in fact, he could hardly wait to get started! Miss Skelton was most co-operative and enabled me to obtain the necessary plans, photographs and details.

In August 1949 the first model of the Little Stinker was completed. It was built to a scale of 1 in to 1 ft, and was powered by an Amco 3.5 cc diesel. During its ten hours of successful flying it was also fitted with Elfin 1.8 cc and Mills 1.3 cc diesels, but it was considered that the model was too small to be really practical. It was decided, therefore, to build another to 1-1/2 in to 1 ft scale and it is this model which is dealt with in this article. Miss Skelton later sent me details of modifications which had been made to her plane, also the new colour scheme, and these have been incorporated.

As The Little Stinker is suitable, with necessary modifications to the mounting, for many engines at present on the market, no engine is indicated on the plan. The prototype was fitted with an Amco 3.5 which was mounted radially on the metal bracket shown.

It is not suggested that this model is a suitable one for beginners as the construction requires a certain amount of skill, but it does, however, make up into a very attractive model which will amply repay the care taken during building.

Fuselage: First cut out Formers A-E. A is cut from 1/8 ply, B from 3/16 ply, C from 1/8 hard balsa, D from 1/8 ply and E from 1/8 balsa. The nose piece is cut from 5/8 block balsa. Assemble fuselage framework in the normal manner, gluing the stringers into the notches in the formers. Care must be taken at this stage to keep the assembly true by frequently placing it over the plan during construction..." 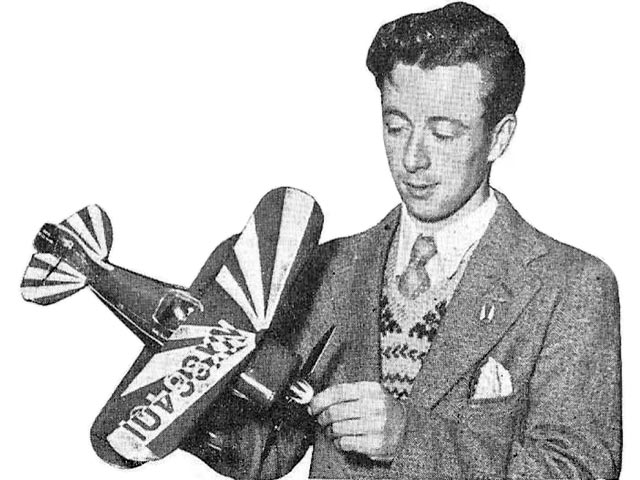