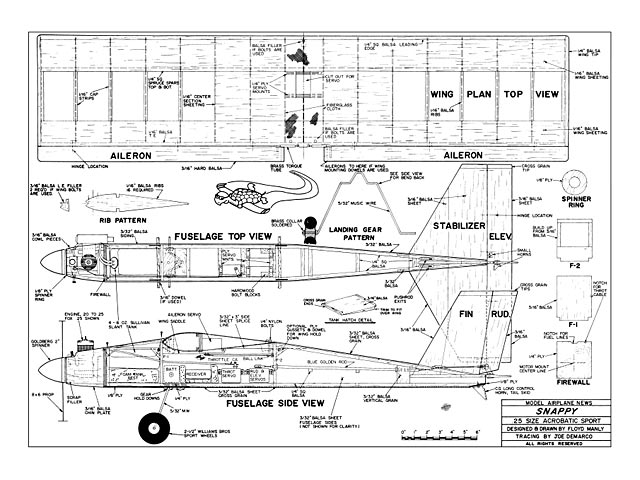 Quote: "Easy to build, easy to transport easy to fly Snappy has it all. By Floyd Manly.

WHAT AN exhilarating plane my Snappy turned out to be. I wanted to design a small, easy-to-tote airplane that would be fully aerobatic and fun to fly. And that's exactly what I created with the Snappy.

So if you'd like to build an airplane to satisfy your craving to throw something up and "wring its tail," then follow me through the steps of building the sassy Snappy.

First I found a six-year-old Fox .25 to fulfill the small and easy-to-carry prerequisite. That meant building a 48-inch wing.

For a fully aerobatic plane, I wanted easy-to-build strip ailerons and lots of throw on all controls. A short coupled aircraft is quick, so the wings were designed big and the tail feathers were tucked in close. Simple piano wire landing gear put the 2-1/2 inch wheels on the ground to keep the prop out of the grass. A plain tail skid saved the weight of a wheel. The Snappy was first built without a rudder, as some of the pictures will indicate, but ground handling was nonexistant until I installed a fourth servo.

Pardon the pun, but constructing Snappy really is a snap. There are no compound curves or complex construction to figure out. Every part is straightforward. Cut them all out to make a kit, or cut and glue as you go. I prefer the latter because the workbench tends to get a little cluttered, and I hate looking for a piece I know was cut.

In either case, start with the fuselage sides. Cut out two identical slabs from 3/32 x 3 inch balsa sheets. Cut the slots for the horizontal fins, and use a rib template to shape the wing saddle. Be sure to cut away the extra 1/16 inch allowance for the wing center sheeting.

Note that Hot Stuff gap-filling glue is used throughout all construction, except as noted. It's fast and it eliminates the need to pin or clamp. It's not so fast that the alignment can't be adjusted before it kicks off.

Cut, fit and glue the firewall parts F-1 and F-2 to the fuselage sides. Use a square or triangle to get everything straight. Add the tank compartment gussets, and the wing saddle doubler. Glue the bottom fuselage stringers in place, then add the plywood chin plate and the landing gear ply doubler.

Fit the top fuselage stringers, and glue in the reinforcement plate in front of the horizontal stab cutout. Pull the aft section together and trim the stringers until the side slabs touch at the rear. Align the fuselage over the plans, then add the balsa cross pieces. Glue them and the tail together, and add the ply tail-skid plate... "

Quote: "Hej, my model is built from the plan in the magazine MAN March 1983 before I had a scanner. I took a ruler, measured as good as I could and made my own plan - and the result is what you see in the photographs [model photo & more pics 003-005]. When I got an A4 scanner I scanned the magazine and that is the plan here. Regards, KLH" 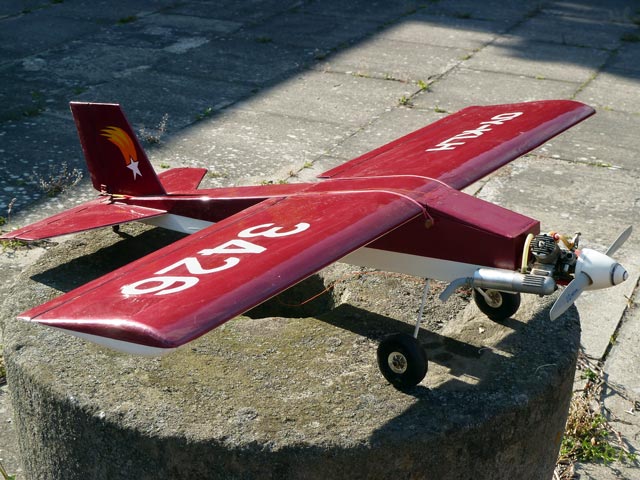