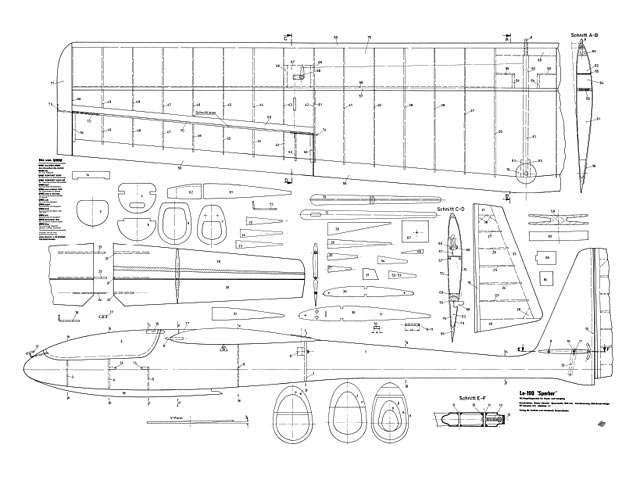 Quote: "I've another plan here for Outerzone. It's the very nice Lo-190 Sperber (Sparrowhawk) from Günter Obrecht. Originally it was distributed by Flug- und Modelltechnik as an add-on plan to the magazine, together with the building instructions. Best regards, Harald"

Quote (kindly translated by Harald from the Günter Obrecht article): "The Sparrowhawk has been developed from a set of proven aerobatic models, and a quick look at the plan shows that - apart from the slip angle - it has nothing common with a thermal glider. The flight speed in normal flight is at about 10 m/sec, while in the aerobatic maneuvers, of course, much higher speeds will be achieved. The very robust and spacious hull is aerodynamically well optimized, while the excellent flight behavior is due in particularly to the aerodynamically good effect of the ailerons.

Any relatively horizontal figures including outside loops can be done easily by the Sparrowhawk, but in conjunction with the large ailerons and necessary speed several roles are consecutive possible. The model can (also) be used very well at wind speeds over 5 m/sec, and even at 20 m/sec airspeed at the slope the Sparrowhawk feels very well and stable.

For weaker weather conditions flaps are really necessary. The deployment of these flaps should not exceed 15 degree, otherwise the drag would increase very much; Of course, the elevator must be trimmed slightly in 'deep' direction.

With a normal digital R/C system, the model is flown without additional weight increase; a receiver battery of 4/500mAh in the fuselage nose may be quite enough: In a flight state near stall, the Sparrowhawk shows no tendency to drop a wing. At the tow line, he makes it only by slight nod 'attention that too much high' is in. If the towing hook is behind the center of gravity, the same effect can be observed.

To avoid any fall through of the model during landing operations, the speed must not be lowered too much - the preferably landing speed should not be less than 5 m/sec." 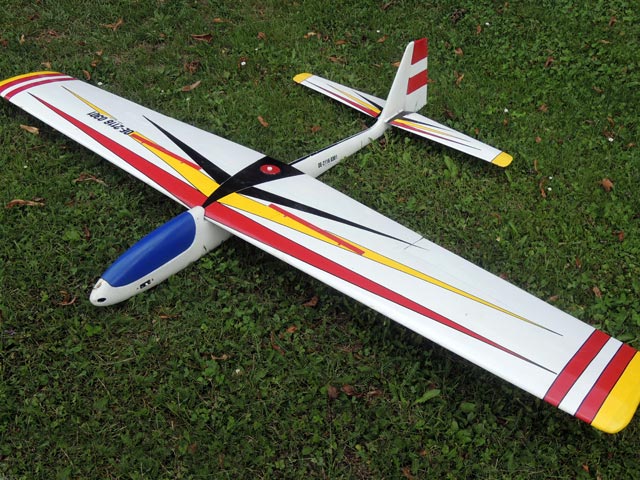 Thanks to your website I found out which plane I got from a friend [main modelpic].
HerbertP - 29/08/2019
Add a comment