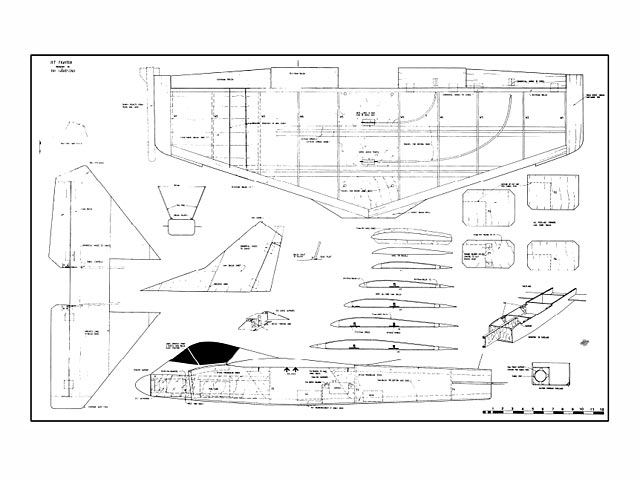 THE JET FIGHTER. Since the 50s this has been the show stopper and the basic attraction of innumerable airshows. The jet fighter has been the dream of boys of all ages, the whine and roar of its engines has followed spectators home and stayed in their imagination weeks after the show. Even today the jet fighter will be the airplane without which no airshow is complete. Mighty Hercules transports, pirouetting helicopters or aerobatic biplanes, all will fade away when the jets come hurtling out of the skies.

Now how does all this relate to the model world? Yes we have got ducted fans and scale models which are both impressive, but oh so difficult to build, fly and service for the average modeller. Is there another way to deal with the problem? Two years ago I started thinking about solutions to this interesting conundrum.

Jet Fighter: I didn't just want to design a jet-like model - I wanted to design a model that was similar in performance, appearance and atmosphere to the jet fighters of the 80s. The best of them fly at speeds between 200km/hour and Mach 2, they have astonishing slow-flying ability as well as high top speeds. They have very advanced aerodynamics and can turn very tightly.

In a model scaled to about 1:8 this would mean a stalling speed of about 25km/hour and a top speed of 300km/hour. Could this speed spectrum be covered with a model? Could the model turn with a radius of less than 50 metres? (the F16 turns at 400 metres). Could the model be stable at very high nose up pitches? And could this model still be built by anyone, flown by the average Sunday flyer at the cost of an ordinary aerobatic trainer?

I made a list of the modern jet fighters from Nato, the Warsaw Pact and neutral countries. I also obtained a lot of information on them from various books. Some of them were discarded at an early stage. All with swing-wings (like the Tornado) were impossible due to construction problems. The deltas and canards (like Mirage and Viggen) had flying characteristics unsuited to the Sunday flyer.

A bunch of fixed wing planes were left with F15, F16, F18, Jaguar, MiG25 (with its successors MiG29 and MiG31) and Mirage F1 as the most promising examples. Close studies of the rest of the jet fighters were important for aerodynamics.

The jet fighters of the 70s were often projectiles, aimed at closing in at high speeds, firing a missile and escaping quickly. They couldn't turn close and were terrible at low speeds. The 'Starfighter' is the most notable example. However, these aircraft were often rather good-looking, with good streamlining and round bodies.

The jet fighters of the 80s are more bulky constructions, with fences, strakes, large jet intakes and double fins. But in a way the latter are easier to model. Their high speeds come as a result of powerful engines, often a pair. In a model this is easily done with a modern, high power 'FSR' motor, driving a conventional propeller. A modern 0.40 engine delivers up to 2bhp and with a model weighing 2-2.3 kilos there is no problem in lifting the model straight up and reaching speeds of up to 200kmh. Not as high as 300kmh - but I'm sure nobody really wants that speed!

The low speed problems are solved with a lot of gadgetry in the full-size:

All these options were eventually included in the model. Details like swing wings, folding wing leading edges and such were abandoned for complexity. The stall speed came close to the 20-30 km/h goal. And the turning ability was also obtained with a good margin.

The Jet Fighter Model: So, in the spring of 1983 the 'Jet Fighter' first lifted from the green and well cut surface of the club field. The prototype was built in a month after careful studies of the bodies and wings of the new jet fighter generation. As the body was created with the aim of giving the impression of two jet engines there was enormous empty space even after installing the R/C flight pack.

The first flights were a breathtaking success! An 0S4OFSR could easily zoom the model straight up into the blue and the mere sight of the plane banking round in circles around the other clubmates' planes was very encouraging. Low speed characteristics were extremely good in a straight line. But then the problems started.

From rolls the 'Jet Fighter' would come out in very strange attitudes and low speed turns were more like slalom skiing. Slow motion films of the rolls showed that the fins and stabiliser couldn't keep the plane straight on course. An enlargement of both areas by about 30% cured the disease. Unfortunately we crashed the prototype during the experiments..."

Update 23/2/2022: Replaced this plan with a clearer version, thanks to Circlip, RFJ. 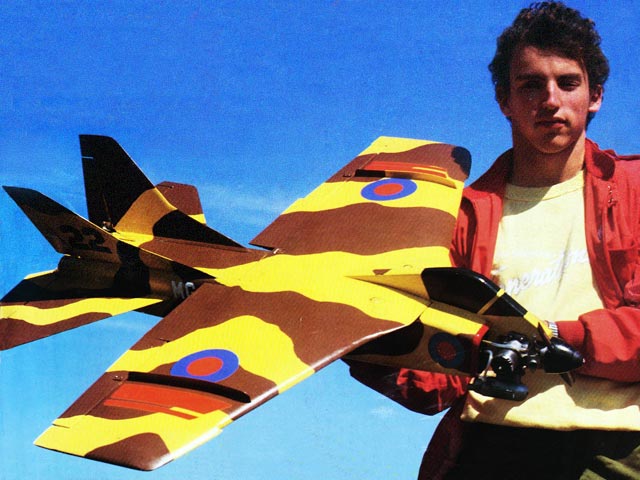