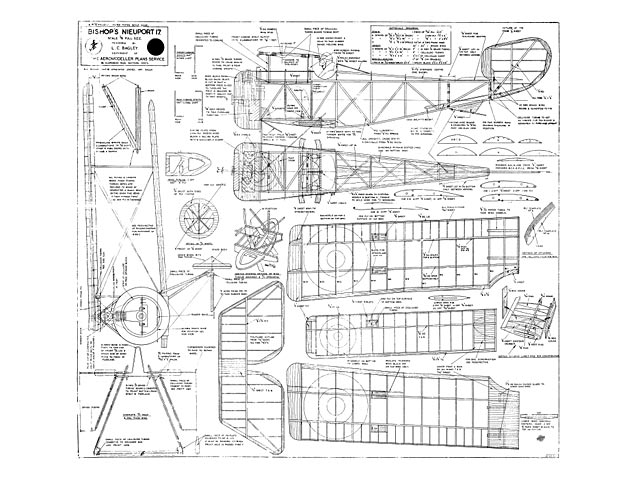 As readers will readily appreciate it is our privilege to witness many a fine model in flight but rarely has anything stirred the depths of our hardened editorial hearts to such an extent as did this magnificent model of Billy Bishop's own Nieuport climbing away on its final proving flight. Never before has the romanticism of the 1914-18 era been so vividly portrayed. With the sound of the wind in the wires and the bark of its sturdy Mills' engine echoing in scale the original Le Rhone, the model has more than justified the hours of patient trimming and modification that were necessary before satisfactory flight performance was achieved.

The diesel engine whilst bringing many advantages to the flying scale modeller brings also a large and menacing problem - Torque! In spite of 5 degrees sidethrust and washout in the port wing, flight after flight ended in that sickening spin in that we all know so well. The model after a beautiful take-off would raise our hopes by completing a full turn to port and then well, you all know the rest so that it is hardly necessary to describe the unhappy ending. However, chastened but undespaired, we continued the struggle and it was left to an idea brought to this country by M Balasse of Belgium to provide the solution that finally defeated our arch enemy Torque. Many readers will have seen the stupendous climb with accompanying roll off the top performed by the Belgium shoulder wing contest models that earned such a reputation during their visit to this country last year. The secret of their success was an extremely simple, but nevertheless cunning, pendulum rudder control. This fitted to the Nieuport and adjusted to give the fullest possible movement under torque, provided the final solution.

These 1914-18 scale fighters whilst fascinating to behold are rarely foolproof in flight but we can in this case thoroughly recommend the Nieuport. it is as safe to fly as a normal petrol semi-scale job with an equal performance. For those of you who cannot resist it (we are sure that there will be many), we give the following advice on trimming and flying:

Firstly, check all flying surfaces, strut fittings, wheel alignment not forgetting your CG! Then test glide over a level surface or long grass. The sinking speed of this model is higher than is normally encountered owing to the excess drag cif the struts and wires, etc, so do not be misled. The glide will appear steeper than that of a normal duration model and it must not be assumed that the CG needs shifting or that more incidence is required.

Satisfactory glide tests completed, a power ROG should then be attempted. Again, check all the fittings and make sure that the pendulum rudder is operating satisfactorily, then warm up your motor for two or three minutes. Slacken off your contra-piston and over-rich the mixture until the Mills is running at the lowest possible revs and then let her go, into wind of course.

We cannot over emphasise the importance of conducting the initial power tests with the minimum amount of thrust and under calm weather conditions. Two or three flights under these conditions and the power output can be increased in progressive stages until finally the Nieuport is climbing like a Contest model.

Before passing on to the constructional details we would mention that only minor exterior damage was encountered during the many heavy landings that the prototype endured in its initial stages. Everything is 'knock-off-able' and, as our American friends would say, She's rugged!

Fuselage: The basic frame of 1/8 sq is built in the usual manner, the top longeron being used as a datum line. It is best to build the lower wing tongue assembly as a separate unit and instal it complete as the lower wing setting at zero lift, is critical. The small side panels which carry the wing tongues are of..."