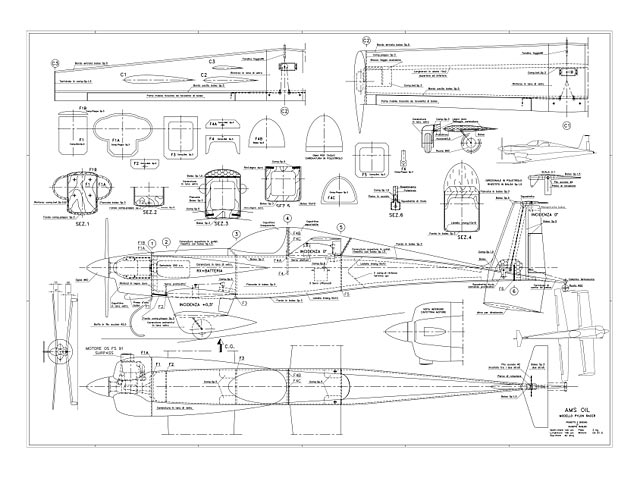 The subject AMSOIL Racer (aka the AMSOIL/Rutan Racer aka the Rutan Model 68 Racer) was a tandem wing plane designed by Burt Rutan's Rutan Aircraft Factory, and built and flown by Dan Mortensen. It set several speed records, before crashing at the 1983 Reno Air Races.

Years ago a friend of mine gave me several back issues of the American magazine 'Homebuilt Aircraft'. Among the many beautiful and colourful airplanes, my interest was caught by a strange looking racing airplane designed by Burt Rutan. At first sight it resembled a 'Quickie', but this was an entirely new design, purposely designed for pylon racing, complete with check cowls in the purest Reno style.

What really attracted my attention was that this plane had two wings like the Quickie and an all flying little stabilator, if you can call a flying surface designed by Burt Rutan by any usual name. I had never previously seen this aircraft nor any model reproducing it. It seemed pointless to search for a three view drawing, so I decided to draw the model based upon photographs and overall dimensions as described in the magazine article. The model is therefore not true scale, but a comparison with the full-size photos shows it to be very close.

The Ams Oil was designed by Rutan for Don Mortensen to participate in the Reno races biplane class. I do not know if Ams Oil ever won a race, but it sure looks fast and it clocked 232 mph around the three-mile course at Reno in 1981. Rutan designed a new airfoil, which is said to have a laminar flow of 60 - 61 percent of the wing area in racing conditions. The test pilot reports:

It took at least 30 seconds with power off to slow down from 140 to 80 mph because of the superclean little airplane. At 80, I kept coming back very slowly on the side stick. The needle came down to 70 and, as it was approaching 60, the left wing dropped abruptly - no burble, no buffet, no nothing. I realised there would be no slow approaches in this airplane. The Ams Oil racer is a joy to fly.

While this last phrase is applicable to the model, I have to say that having employed no laminar airfoil, it is absolutely impossible to stall it. Going back to the aircraft, its dimension are: 22 foot span on the upper wing, 20 foot 9 inches on the lower, and the fuselage is 22 foot long. The airframe is good for +/- 12G, while the cockpit section was designed to withstand a 22 G load. The T-tail is no addition: Rutan designed it in right from the start to provide more elevator authority when needed for the 6G vertical turns.

Construction: Building Ams Oil is not a difficult task. Wings are made with obeche sheeted white foam (wing and decking sets are available from the Nexus Plans Service, price on application). The bottom wings are reinforced with spruce longerons to carry the additional loads from the landing gear. A grooved hardwood strip is glued on the wingtip's bottom side, aligned with the longeron. On its side is glued a 1/8 in ply plate to retain the landing gear wire. These parts are better glued in before sheeting. The landing gear fairing is retained by self tapping screws into two little hardwood pieces imbedded in the foam. Glue and sand to shape the leading and trailing edges and glue together the wing halves.

Cut a longitudinal slot. Insert and glue with epoxy the 1/8 ply wing joiner. Mount the servos as drawn on the plans. Doing it this way will not reduce the wing strength. Reinforce the joint with glass fibre as usual. The ailerons for both wings are shaped from sheet balsa.

The landing gear fairings are made using the 'lost mould' method. Shape a block of heavy white foam or extruded blue foam to the form shown on the plan. Add a 1/8 rib and fill the empty space with scrap balsa or foam. The most difficult part is making the glass tissue stay put, particularly on the bottom where the vertical sides meet the wing. I suggest using many layers of light tissue instead of a single heavy one..."

Quote: "Please find attached the dwg of a old model of mine. It was published years ago on RCM&E and Italian magazine ECO Model. I thought to submit it because every now and then Quickie plans appear but no one cares about this similar product of that genius called Burt Rutan. I hope that you can use dwg files, I'm also attaching images of a simulator model based on my plans by a Czech guy [model photo & more pics 003]. Regards, Giuseppe Ghisleri, Italy"

Note the 'original' drawing here is the CAD zip download. That's the file that Giuseppe sent us, and that is his design, his work. The PDF file you see here, conversely, is only a pale reflection of the CAD drawing. That's because I made it, from the CAD file, just so that we have a PDF file in this slot, for Oz users who don't have CAD software or a CAD viewer. But exporting from CAD to PDF is not my greatest skill, so if anyone out there can create a better, clearer PDF file (multi-colour? vector format?) from this, we'll happily use that. Steve [Edit: this is fixed now].

Update 21/06/2019: Replaced this primary PDF planfile with a clearer, better copy, thanks to RussellH. This one is in black and white, but vector format. Many thanks. 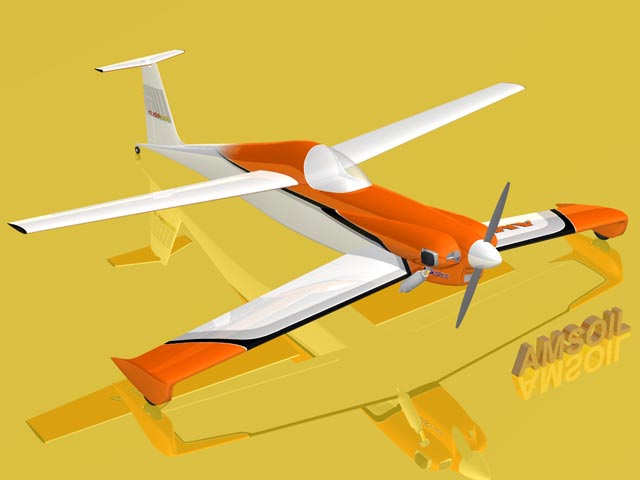