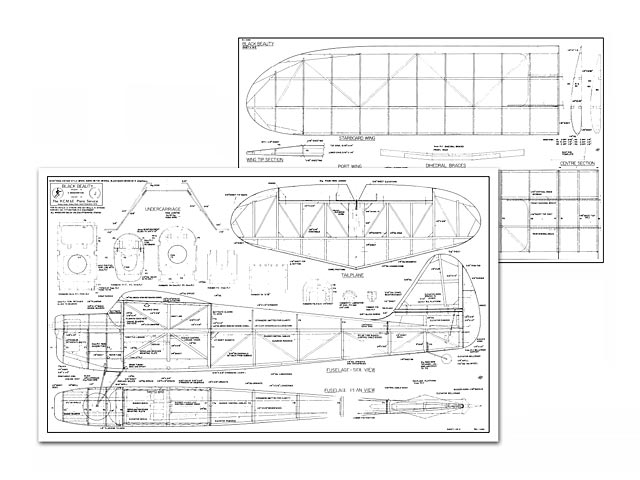 Quote: "Black Beauty, by David Boddington. An 80in wing span version of Fred Hempsall's classic free flight design, the Black Magic (oz1767) designed for '60' four-stroke engines and for three function RC but can be flown rudder only - or free flight!

MANY of the vintage sports power models of the late forties and early fifties had similar layouts and appearances - take a look at the Mini-Eros (oz7630). The reason is not difficult to understand, the high wing layout, with generous dihedral and large tail surfaces, equated to a stable design. Forward positions of the main wheels allowed the model to land, not necessarily into wind, without too much risk of it turning over. Yet, with the moderate engine power and careful trimming, the models could be ROG'd (rise off ground to newcomers!) consistently and the flight path would be equally predictable. Perhaps the comment regarding consistent take-offs should tell us something in relation with radio control models, notably that we tend to over control during the take-off and more significantly, fail to trim out the model accurately. Trimming, in this instance, does not only mean for straight and level flight, but also for wheel tracking and correct engine side-thrust settings.

For me, and I guess for many other vintage enthusiasts, the fact that the models of this era are immediately recognisable is part of the delight in building them. They have a character all of their own and, with the 'Black Beauty' I have retained all of the original lines and sections to ensure that none of the original flavour is lost. Only a little of the construction has been modified for the benefit of modern constructors - I don't think there are too many modellers around who would fancy carving a hardwood nose block and letting in longerons, sheeting and the engine bearers! How many of you own a full set of chisels?

I couldn't help smiling at the performance figures quoted on the original plan; the best flight was quoted as 26 minutes OOS (out of sight) at the Irish Eliminatory Trials 1946 - sounds like a good way of eliminating the opposition.

The original models (Fred built three for 1946 - he needed them if they kept flying away in competitions) were powered by spark ignition engines and were covered in silk. Four stroke engines can be used in the 'Black Beauty' ('60' sizes are quite adequate) although there are a number of spark ignition conversions available for those of you wishing to keep more in the vintage mould. Original plans and article were printed in the September 1947 issue of Aeromodeller and copies of the original drawing of the 'Black Magic' are still available.

Construction: The plans show a one piece wing, if this presents transportation problems it would be possible to arrange plug-in outer panels but, do make certain that there is some means of locking the panels in position - the 'vintage' method of rubber bands, through tubes in the centre section, and hooks on the wing panels should suffice. If you are at all worried about the ability of the wings to take positive G loads with the plug-in system, it would be prudent to fit wing struts or brace the wings to the underside of the fuselage with stranded control line wire. Equally, for ease of transportation, it would be possible to make the fin and tailplane assembly detachable. an external elevator horn connection would be advisable in this situation.

Select medium light grades of balsa wood for most of the construction, the only items that need to be from hard balsa are the wing spars and even these do not have to be rock hard. White PVA adhesive is suitable for the vast majority of construction with 24 hour epoxy being used for the metal to wood joints if you are more used to building modern RC models may I offer a plea? Do not be tempted to 'beef-up' the construction, it really is strong enough and any additional weight will only add to the flying stresses and cause the model to land faster and hit harder!

Sketch out the radio equipment installa-tion and linkages on the plan so that suit-able provision can be made during the basic construction. The drawing suggests a removable radio plate on which the servos, receiver and battery would be mounted and also the use of closed loop control linkage for the rudder - highly recommended. Check the engine you propose using with the bearer spacing shown and make adjustments if necessary. As the construction is relatively simple, and should be obvious from the drawings. building notes are limited to the less obvious areas of construction.

Fuselage: Holes shown in former F4 and F5 are to house a rolled plywood tube and an 8oz round fuel tank, you may have to adjust the diameter of the holes to suit the tank you select. The easiest method of deter-mining the actual diameter is to form the plywood tube by rolling .4mm plywood around the fuel tank (including a reasonable overlap) rubber banding to the tank until the glue has dried and then measuring it. Use the formers for the correct spacing of the 1/4 in sheet between formers F4/5 and 6 when constructing the fuselage sides - do remember to build one left hand and one right hand side ie where the diagonals are set back from the outside.

Bind and epoxy the brass tubing for the rear undercarriage leg to former F6 and the 3mm plywood crosspiece before fitting the former to the fuselage. If you cannot obtain 9g piano wire (or 3.5mm dia) I would suggest using 10g for the rear legs and 8g for the front leg. The undercarriage is retained at the front by rubber bands from the hook on the front leg, through the fuselage tube, to the hook on the opposite side..." 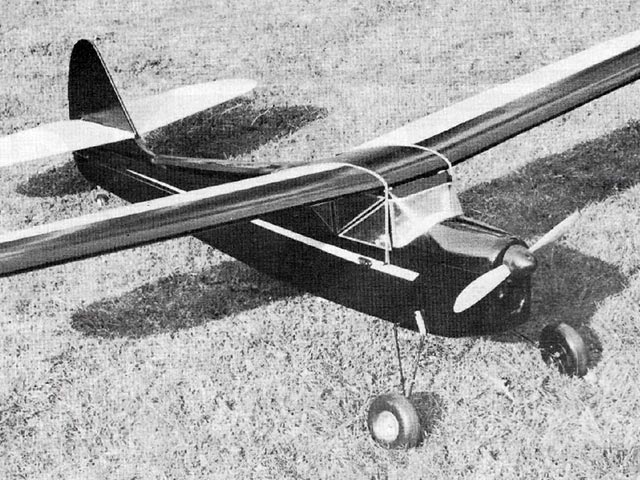