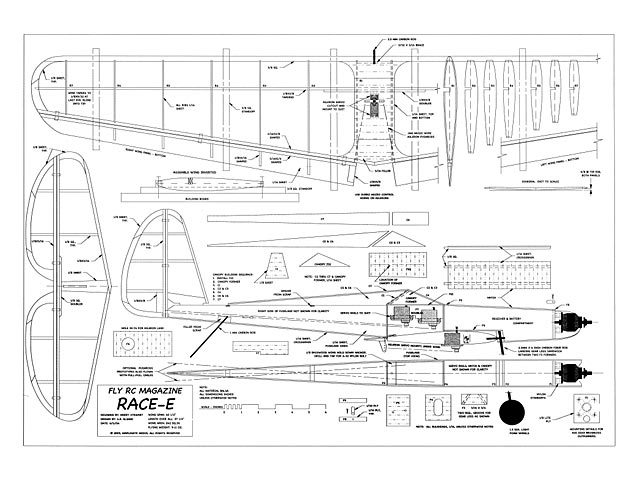 Summary: The Race-E is a fun sport electric model with a classic Golden Age outline. Despite its small size, it flies like a much bigger glow model. It is very aerobatic and cuts cleanly through the wind. When it comes time to land, the large wing and its light weight let you fly slowly, and land like a feather.

Race-E is a lightweight, 4-channel park flyer. Its tapered wing and classic tail shapes give it a very attractive 1930's Golden Age look in the air. The prototypes have all weighed less than 10 ounces and have exhibited excellent performance with Model Motors AXI 2200 series outrunners. Race-E is not a 3D airplane; it is a very good sport acrobatic design and its flight performance can be compared to that of a very good .40 fuel-powered model. Its performance brings to mind the Golden Age air racers and especially the Hughes H1 which, if you stand way off and squint, it sort of resembles. Hence the name, Race-E.

Mark the location of the ribs on both leading and trailing edge pieces at the same time so that they will be identical. I notch the rib locations with a pair of hacksaw blades taped together. Use pieces of excess 3/8 square as standoff spacers.

Pin the leading edge to the spacers exactly over the leading edge on the plan. Then use the ribs to locate the trailing edge and pin it to the spac-ers. Insert the ribs with the spar cuts up and so that they are flush with the upper edge (actually the bottom edge; remember we are building the wing upside down) of the lead-ing and trailing edges. Insert the spar, mak-ing sure that it is flush with the ribs. Install the wingtips on the centerline of the R-7 ribs, and crack the spar at R-7 and fit it as a brace.

The ailerons are built up from 1/16 sheet with 3/16 square leading edges and 1/8 x 3/16 ribs. Glue the lead-ing edges and ribs in place and shape them with the razor plane. Sand smooth. Notice that there is no rib at the R-7 location. Mark your hinge locations and slot the wing trailing edge and the aileron leading edge, then trial-fit the hinges.

Fuselage: Assemble the gear block from two pieces of balsa. Mark the gear leg angles and notch the two blocks. Carefully align and glue the two blocks together. When the glue dries, drill down through the notches with a 3/32 drill. Run it back and forth a few times so that the 2.5mm carbon fiber gear legs are a snug fit. Cut the gear legs to length. Bend axles from .047 music wire and attach them to the gear legs with shrink tube and gap-filling CA or better yet JB Weld.

Begin the fuselage by making two identical 1/16 sheet sides. Glue F-1, the gear block, F-3 and F-4 in place, using a square to make sure that they are perpendicular. Glue the opposite side in place. Pull the fuselage sides together at the rear and tack them together with CA. Install F-5. Install the wing hold down anchor, and sheet the bottom of the fuselage with crossgrain 1/16 from F-5..." 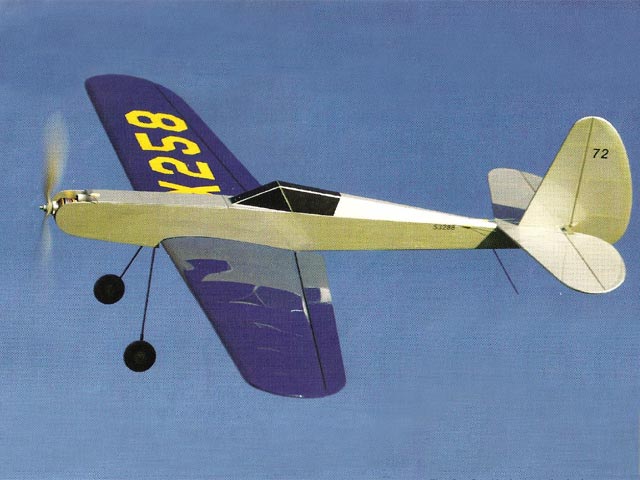