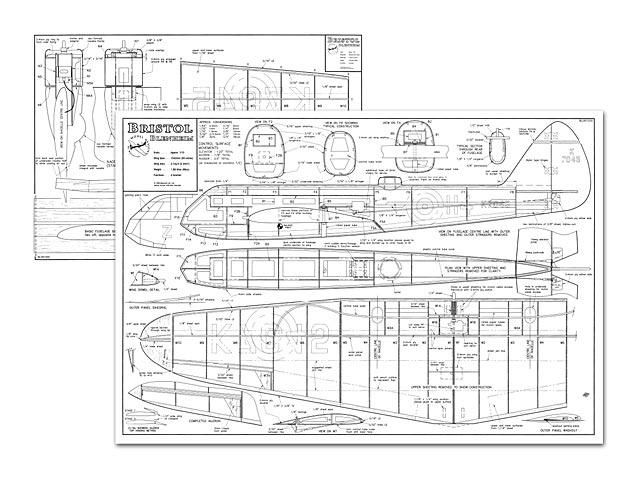 British pilots loved it. Designed as a fighter-bomber, the Blenheim was maneuverable, easily looped, and in the early days of the war, it was the closest thing the British had to a long-range fighter. As a twin, with a Browning machine gun in the port wing and twin Vickers in the turret, it could out-run, and out-shoot most of the world's fighter planes of the day. In fact, it sounded the death knell of the bi-wing 'persuade ship.' It was the first British aircraft of the war to cross the German frontier, and it was quite successful at beating off attacks by German BF110s. The Blenheim's turret gunners discovered early on the BF110's Achilles heel - its twin-rudder tail. They got pretty good at shooting this rather weak appendage completely off.

As the world's combatants got down to the business of killing each other, fighter designs progressed rapidly. By 1942, the Blenheim was outclassed and was a rather easy kill when not protected by fighter escort. But, it was the Bristol Blenheim on which the British warriors of the air cut their fighting teeth.

1/10-Scale Hobbico imports this 1/10-scale Balsacraft model. It is the famous Blenheim. Except for some nicely vacuum-formed parts, the kit is all wood. Many parts are CNC-cut from light plywood. Included is a com-plete hardware package and a set of scale wet-transfer decals.

The Wing: The wing spar is a simple beam, pre-cut from 1/8-inch-thick balsa. The section between the motor nacelles is doubled with 1/64-inch ply and set on edge. The ribs are in halves with the front halves glued flush to the front of the spar, the rear halves to the back.

Instead of the 1/64th-inch plywood doubler I used 1/32-inch, but not because I considered the design weak. I was installing landing gear, so the stronger, 1/32-inch doubler would support it.

The plans show a single servo in the center of the wing to drive the ailerons. I opted for two servos. I used Hobbico's CS-35 High Power Mini BB servos. I shrink-wrapped them with sections of battery shrink tube and then glued them in with Zap A-Dap-A Goo.

Motor Installation: The twin motor nacelles are made by fitting round formers over plywood boxes. Then, 1/64-inch ply is wrapped around the formers. Vacuum-formed rings are then glued to the front. The Great Planes Goldfire, Speed-600 motors slide in through the front of these boxes. I was definitely impressed with the design of these nacelles and the perfect fit of the motors.

Fuselage and Battery Installation: Most of the electronics are installed in the wing. You will understand why as we build the fuselage. Here's how I did it.

The manual contains some excellent isometric drawings. Like the motor nacelles, the fuselage is based on a plywood box. The formers, giving the fuselage its rounded shape, are slipped over this box, glued in place and then sheeted. I mounted the battery pack in this box by turning the top section of it into a hatch. When you build your plane, construct the box according to the plan, but do not glue the top of the box (Part B2) in place; just fit the tongues into the notches. Slide-on and glue the formers. Then cut through the sides of the formers and the top will lift away, providing the framework for a hatch.

I installed a 1/16-inch ply floor in the box for additional battery support, With only seven cells, I still had to move cross-members out of the box. The rudder and elevator servos and Rx switch mount at the rear take up more of the already limited space in this box. The space problem was complicated still further when I decided to increase the number of cells to 15.

The rudder and elevator servo wires and Rx switch wires must go through an opening in the box into the wing to where the receiver and ESC are locat-ed. Wires from the ESC will come from the wing through this same opening to be plugged in the battery pack. Like most mid-wings, a large section of the fuselage is mounted to the bottom of the wing and becomes part of it. This actually strengthens the wing. By cutting through the bottom of the wing sheeting in this area, I was able to uti-lize this additional fuselage depth to mount the receiver, Rx battery pack, and ESC. I used Hitec's new Super-Slim receiver and mounted it as far from the ESC and battery wires as space allowed. I soldered a fuse directly into the ESC wires.

How Many Cells? The manual calls out a pack of seven 1700 mAh cells, wired in parallel - manufacturer's estimated weight is 66 ounces. If you go this route, you need an ESC capable of handling 40 to 60 amps because Speed-600 motors draw 20 to 30 amps each. Frankly, sucking 40 to 60 amps out of a seven-cell pack will result in 3 minute flights, or less..."

Update 31/5/2022: Added alternate plan, thanks to Paul Sluce. This comprises 5 sheets, and includes all parts. It bears the legend: "Restored by great_plans 2008". It was distributed as a 1/6 scale drawing with wingspan of 112 in, and it included a note on each sheet saying: "Just a reminder. These plans have had a scale change, as you are working on your model, do not use any size written on the plan, please measure the drawing & use the measurement".

Now please do pay attention chaps, because this is where it starts to get complicated: This here alternate plan was previously scaled up to 1/6 size. Then we got hold of it. We have now scaled it down again to (we hope) the correct wingspan of 60 in. Please use caution, and check the scaling very carefully before cutting out parts and building a model.

Scaling was fixed (down from 112 to 60 in span) by re-setting the dpi on all 5 pages from 200 dpi to 379 dpi. We have removed the (now unhelpful) text notes re scale change, measuring, etc. We have left the legend: "Restored by great_plans 2008" in place, on each sheet. We have added an Oz stamp.

A further compication is also that this alternate plan seems to be from a different date than the other. So some details like battery and radio installation are different, between the two plan versions. Steve. 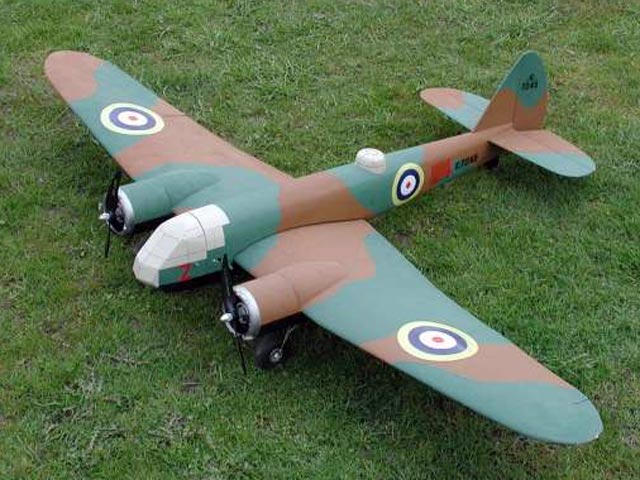