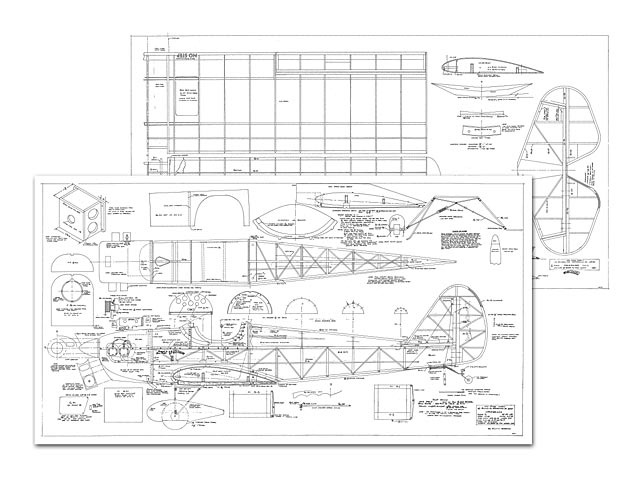 Quote: "I call it the affordable Spacewalker because its size dictates standard radio, glow-engine, wood sizes and hobby shop items. This 1/4 scale Spacewalker isn't the usual giant scale model one might expect to see at a fly-in. It's relatively diminutive in comparison, but it's not exactly a pea-shooter either. Its specifications are:

The wing loading is fairly respectable. For expediency, a 1200 MA airborne pack was cannibalized from a hangared big bird, but a 550 to 800 MA pack would have been preferred. It's easily transportable, and field-assembles quickly with two nylon bolts. It's a real cutie, reminiscent of the racers of the Golden Era during the 1930s. It took top honors in Stand Off Scale and Sport Plane at the Blue Ridge Mall Show in Hendersonville, North Carolina, hosted by the Western North Carolina R/C Society. Who said beauty is only skin deep?

While this project is not intended for the rank beginner, it is a pretty safe bet as a transition scale model from simple scale, like its predecessors, the J-3 Kitten and the J-4 Sportster (see Scale R/C Modeler December 1987).

The enthusiasm of your writer's early youth in aviation quickly came to mind while watching the full-scale bird being developed and constructed from its in-ception. At that time, the RIC J-4 was be-ing readied for flight testing, and the 1/4 scale Spacewalker had to wait its turn at the drafting table.

A word about power: Like the lightly loaded 10-foot J-4 (powered by a .61 OS Max SF), the Spacewalker was not immune to skepticism from the doubting Thomases. It was mistaken for a 12-pounder with an engine much larger than the OS Max .46 SE

This engine swings a big 12 x 6 prop. Remember when these props were used only on .60 engines? The weight-per-hp ratio makes for a very easy-performing airplane. The 4419 airfoil is fairly thick, and it provides the Spacewalker with a slow and graceful flying scale wing. The force distribution also does not deviate from the full-scale bird's specifications. They include three degrees of positive incidence in the wing, and minus two degrees of incidence in the stabilizer.

Lightness and structural integrity were the criteria. Dario's admonishment about airplanes being designed to fly, not to crash was kept in mind while developing the working drawings.

The wood rack had enough balsa to get started. The el cheapo Taiwan table saw contributed much in cutting balsa down to size. Frugality is imperative with today's balsa prices. A cursory examination of the drawing will show conventional construction. For the most part, scale layout was followed with the exception of the one-piece wing which fits nicely into a compact hatchback. The ribs lay flat on the bench; ditto for the wing spars. Nice and easy. The curved areas of the tail feathers are laminates of 1/16 x 1/4 balsa strips. Very light and strong.

Fiberglass cowls and wheel pants are available from Fiberglass Master.

Finish is butyrate dope over Solartex. The builder's experience in covering and finishing may dictate alternative methods and materials. It is suggested that the model be cleaned with Prepsol, and primed with nitrate dope before painting.

The dummy engine was constructed 'a la fudge' and it has fooled a few modelers. The aluminum exhaust stacks and pipes look authentic. The K&S tubing must be annealed by applying heat and quenching in cold water before bending. This process ensures a nice smooth radius, free of kinks. They are assembled with epoxy glue and touched up with aluminum paint, to resemble welds. It is worth the effort. The plans and instructions tell it all.

Okay. Let's go flying. But where? It took more than two months to locate a suitable flying site which would accommodate a model with wheel pants. It was felt that the Spacewalker must fly with its pants on, completely suited up for Sunday Meetin', just like big sister! No pants on, no flying!

In these parts of Western North Carolina, flat land is mighty scarce, and if it does exist, it's usually farmed. Luckily, a member from the Blue Ridge R/C Club from down in Greer, South Carolina, arranged a flying date for us so, after an hour-and-a-half drive, the field was located. The runway grass was ideally short, with a large, beautiful lake on one approach, and tall trees on the other. A small boat was available.

After some picture taking, (exalted editor say, One must take pix before flying) and the usual ground checks..."

Spacewalker, kitted by Dry Ridge Models, 1987. This is the plan as published in Oct 1988 Scale R/C Modeler. 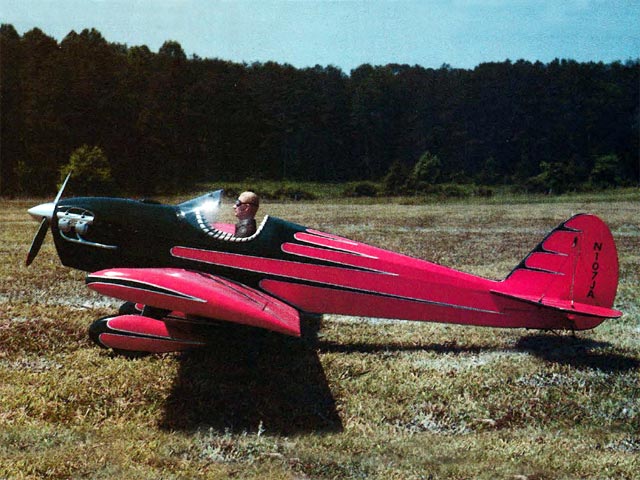