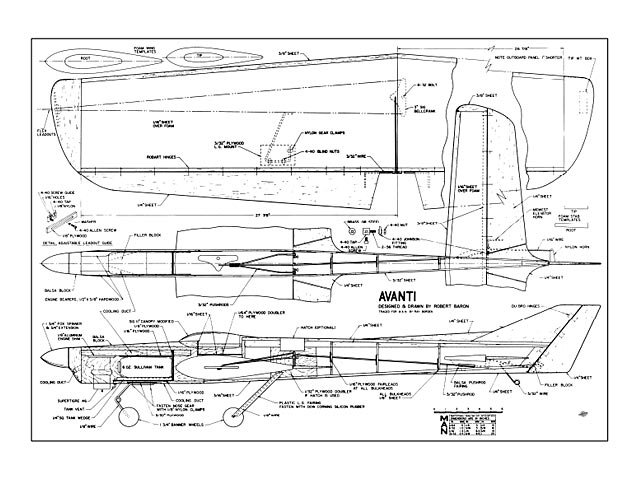 Quote: "With the decreased emphasis on appearance points in Control Line Stunt competition, there has come a resurgence in the flying aspects of stunt performance. Now we combine both of these features for a good-looking and fine-flying machine that does it all well! Avanti, by Robert Baron.

With the reduction in appearance points has come a resurgence in interest in the flying aspects of Stunt. Once again, stunt fliers are looking for improved performance, after a period when getting those extra points on the ground seemed to be taking precedence over the flying.

Good flying stunt ships are a combination of good design and good adjustment. Without both, the flier will have to be satisfied with less than the best. While a low weight and wing loading are very important, a solid design coupled with careful adjustment can be a formidable combination, even if heavier than the competition. Proof of the pudding is that a very obese Avanti (82 ounces) was successful in beating the competition in Southern California.

Consistency under varying weather conditions and ease in accurate placement overcame its inability to corner sharply. Present versions weigh 60 to 63 ounces, and are now competitive in turning while still retaining ease in flying.

The Avanti, like most ships, has resulted from numerous versions, each with subtle changes in an effort to improve performance. All things being equal, large planes fly better than small ones. The problem with large planes (besides transporting problems and expense) is that they do not reach their best performance until the line length approaches or exceeds the competition limit of 70 feet. In the case of the 65-inch, 63-ounce Avanti, it was flying well on 72 feet of line with a .46 Tiger, and could have handled even more line. For this reason, I have reduced the ship to a size that is suited to 70 feet or less.

One interesting experiment was to take an Avanti that was flying with a .46 Tiger, and modify the nose to accept a .60 Tiger. Although this plane was trimmed out again, the substantial increase in power did not appear to improve its flying characteristics, and in fact seemed to cause problems of excessive yawing which were never fully removed even with a 'Rabe' rudder. Numerous props from 12-6 to 14-5 were tried, with the lower diameter props working best. This would tend to indicate that it is possible to overpower a stunt ship although I would not consider these results definitive.

Another area of experimentation was trying various tail moment arms. Near-identical Avantis, one with a 16-inch moment hinge to hinge (the commonly used reference point among stunt fliers) , another with an 18-inch moment arm, and a third with a 20-inch moment arm were built. The longer the tail moment, the smoother the plane, but the slower the corner. The 18-inch moment arm to me was a good compromise of smoothness and quickness. While corners are important in stunt flying, you have to remember that smoothness and consistency can score lots of points. Takeoffs, landings, inverted flight, all rounds and eights, and the impression of a ship 'flying on rails' - all contribute to a winning pattern. For this reason, a relatively long tail moment was kept in the latest version.

Most stunt fliers are going away from the tricycle gear to save weight. I feel that while it costs an ounce or so, it buys absolute reliability on takeoffs and landings over a wide variety of conditions. The gear on the Avanti is adjusted until in actual use it is a two-wheeled gear, ie the landings are made on the main gear, and after it is rolling for a while, the nose is dropped. To me, this is as pretty to watch as a two-wheeled landing, while retaining the security of the full-down panic button should weather conditions require it. After seeing the results, I have noticed, some of my competitors are going back to the trike gear. It does hurt to lose a meet on that last maneuver..." 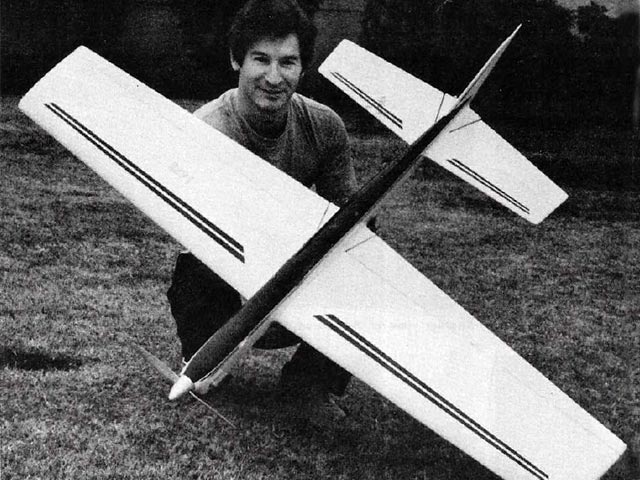