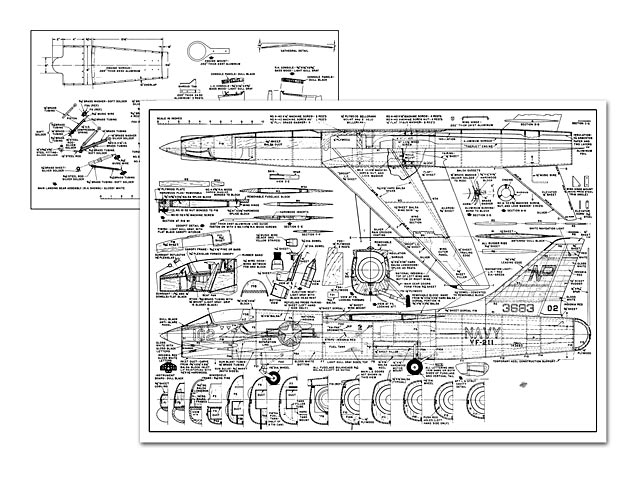 Backbone of the US Navy Fighter Arm is the Chance Vought F8U Crusader in its various forms of the F8U-1, F8U-1P, F8U-2, and F8U-2N. Capable of speeds in excess of 1000 miles per hours and armed with 20mm cannon and Sidewinder missiles, it is a match for any airplane in service, yet it lands with the speed of a trainer. An amazing fact is that only 18 months elapsed between initial design studies and first flight. More outstanding is that production deliveries to the 1st operational unit began less than two years after initial design.

The Crusader captured the Thompson Trophy with a new world speed record of 1000 mph plus, and then went on to fly the continent at supersonic speeds piloted by the Marine Corp's most recent Astronaut Lt Col John Glenn. The Crusader rightfully takes its place in a long line of famous Chance Vought Aircraft. Stated best was the tribute by a Navy pilot who called it the 'Supersonic Corsair'.

Before going into the construction of the model, there are several people who deserve a special vote of thanks for their assistance in making this project possible. First is Art Schoeni of the Chance Vought Public relations staff; and then there is another CVA public relations man, John Innes. On the modeling end there was J Frank Dial of Arlington Texas who applied the beautiful finish and markings on our model when the author was hung up in work on the full scale Crusader and couldn't meet the deadline.

The F8U is an ideal subject for a jet scale model since the two position wing offers an ideal solution to the problem of engine access without hacked up, non-scale access hatches. Just fold back the wing and there is perfect access and 100% scale too. The model can be flown with wing up to adjust aeodynamic features and to provide additional cooling air for the engine.

In order to keep the model down to a decent size, the Tiger-Jet engine was chosen. This is a light engine of some two pounds of thrust and in order to provide good power and non-power flight characteristics the model weight should not exceed 3-1/2 pounds including engine and fuel.

The particular airplane chosen as my subject was F8U-1 number 47 known to the Navy as BuNo 143683 and bearing the Red checkerboard and arrow insignia of Navy Fighter Squadron 211. This is a particularly attractive aircraft blending the flashing red squadron insignia into the soft gray and white standard paint scheme.

Start by cutting all fuselage bulkheads from 3/32 balsa sheet except F9, F9A, F10, F10A, and F15 which are cut from 3/32 plywood. Don't forget to drill the landing gear mounting holes and push-rod holes. Some balsa bulkheads will require snaking in two pieces since they exceed the normal 3 in sheet width.

Next, select a piece of top grade 1 x 6 lumber to use as a jig board for assembling the fuselage. Be sure the board is perfectly straight on the surface and has one true side. Draw two pencil lines 1/4 in apart down the center of the board. This will establish keel location..."

Quote: "Flying: The most important thing in flying a Jet model is to have a well drilled team of assistants to start and release the model. Once the engine is started the tail pipe heats up so rapidly there is great danger of burning up the model. In order to keep the temperature down below the danger point, ram air is required to flow thru the fuselage. This is accomplished by getting the model into the air.

The ideal procedure is to have one man holding the model, one man operating the air and ignition, ready to disconnect all leads immediately upon engine starting, and a third man standing by with a CO2 fire extinguisher in case of fire. The pilot should have handle in hand and ready to take off when the engine starts.

Once the engine is going and the model released, it will start rolling slowly and elevator will not be very effective but as it gains speed and becomes airborne the control will become very sensitive so fly carefully. Fly with the arm rather than the wrist. This will help you avoid over-control. The model flies smooth and fast and the fuel capacity shown will fly the model for about 12 to 15 laps. Bring her down low and be ready for landing after about 10 laps. Pump cool air into the fuselage immediately upon landing. Use of 50 to 70 foot lines is recommended." 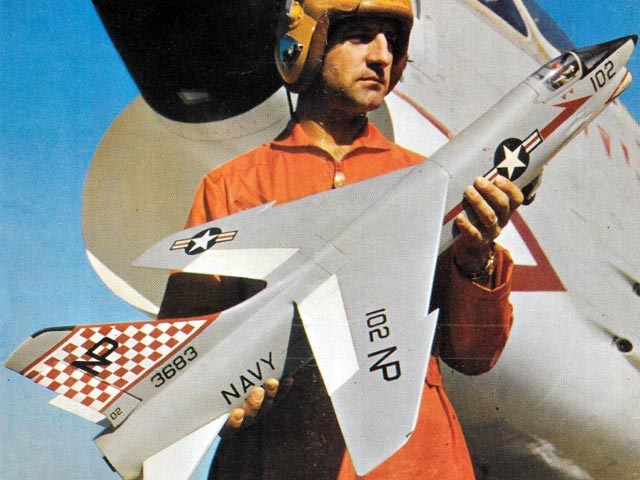