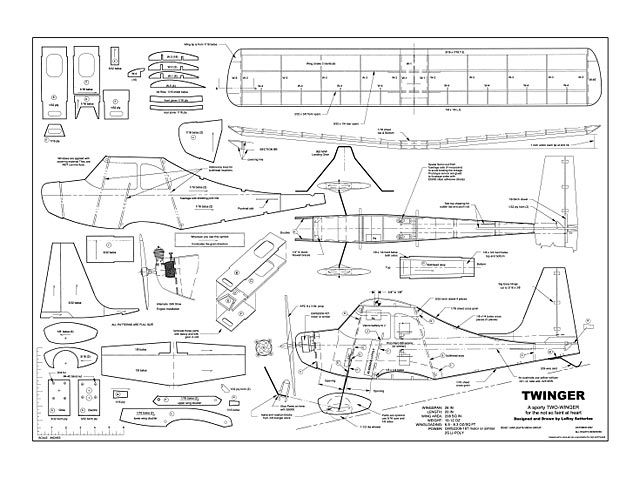 The Twinger is a whimsical small biplane with crisp flying qualities for the intermediate pilot/builder. It will look familiar to older modelers who remember the and the from the earlier days of model aviation. Luckily for us modelers, fun is timeless.

This little plane (and this is the truth) started life as a sketch on the back of a McDonald's napkin. It was inspired by two designs I fondly remembered from my youth, Joe Wagner's Dakota (oz233) biplane and Fred Reese's Buttercup (oz5779) high-wing monoplane. My goal when designing the Twinger (short for two-winger) was to create a small, sporty biplane that had the look of these classics but was modernized with today's latest E-flight components. A low parts count and simple construction were desirable too. Jon McVay and 1 built two test models. Mine is the navy version, and Jon's the purple and white one. Both were successful and a lot of fun to fly.

Airborne: The Twinger is quite quick on the controls but can be tamed by utilizing either of two methods. One is to introduce some exponential. We use 50%. The other is to limit the end points to about 70% of the total available.

Takeoffs are possible from large smooth surfaces, but since the tail skid isn't steerable, it's tricky keeping it aimed until liftoff happens. Hand-launching is much more positive. Grip the fuselage behind the lower wing between the thumb and the first three fingers. Use the fourth (little) finger as a stabilizing tripod under the bottom wing. Advance the throttle to about 2/3 and toss at about a 10-degree upward angle. It will fly right out of your hand.

Loops are easy and hammerhead turns are cool too. Spins are realty more like tight spirals and rolls require a lot of down elevator when inverted. Inverted flight, on the other hand, requires surprisingly little down elevator to maintain. Really tight circles with a little top rudder will amaze your friends. The loops are so small with a lot of elevator travel that they will almost pop the rubber bands off the top wing.

Tips for Success: Traditional building methods are used throughout, with a composite of sheet and stick construction. The actual building goes quite quickly once all the parts are cut out. I made a Formica template for the shape of rib W-3 and fudged all the rest from the same template. All the parts patterns are full size after you enlarge the plan sheet 200%. Cut the patterns out with a scissors or a No.11 blade. Tack glue them to your wood with a light dusting of 3M 77 or equivalent. When making multiple parts such as the fuselage sides or doublers, try to cut both pieces at once to get them the same. I use tiny dots of medium CA to hold the two pieces of wood together during the cutting process, then separate them with a sharp, single-edge razor blade.

Wings: Both wings are identical. This makes building easy since all the parts are the same. Also, at the field when you are ready to rubber band them onto the fuselage, it will make zero difference which wing is on top or which is on the bottom. Build the two center sections over the plan first. Using two short sections of the front and rear spars and 1/16 sheet, build the bottom surface first. Then add the three W-1 ribs and the ply spar joiner/dihedral braces. Add the leading and trailing edges, then sheet the top with more 1/16 balsa. Sand lightly and you're done.

The four outer panels are built directly over the plans and are basic wing construction. Pin down the spars, the TE and LE and add the W-2 and W-3 ribs and the W-4 half ribs. Add the W-5 rib on the outer ends. The W-5 is used to help form the 1/16 balsa wing tip as it is glued on. There is no wood on the bot-tom of the wing tip. The covering forms the shape shown in Section BB. Slip the wing panels onto the stubs of the ply wing joiners..." 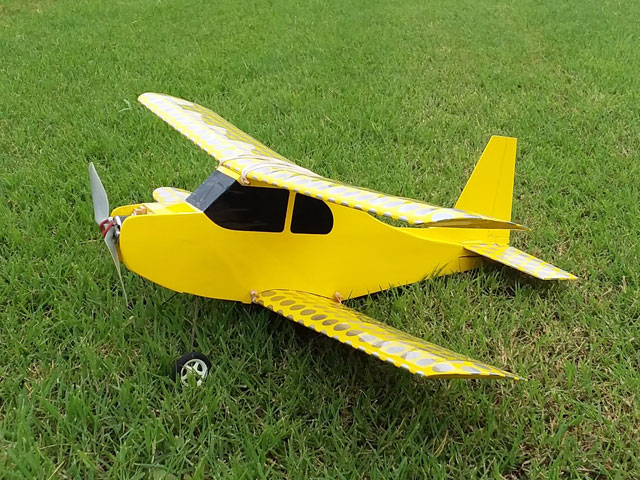 Hello, attached are two photos of my Twinger for Outerzone [model photo & more pics 006]. Many thanks for your outstanding website.
TonyAccurso_CA - 11/06/2019
Add a comment