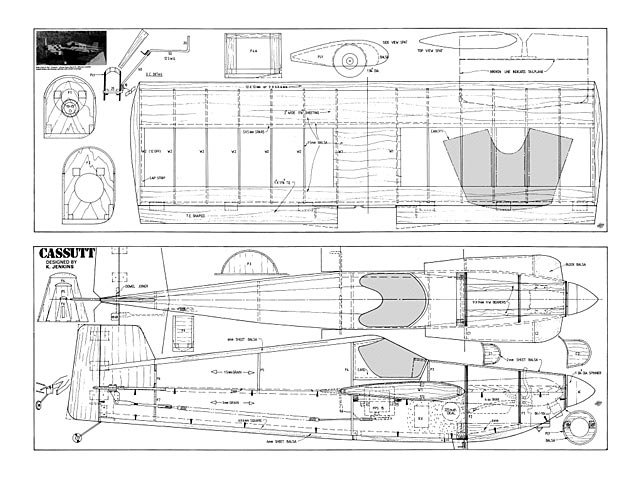 AIR RACES have been around almost as long as the aeroplane, pushing forward the development of air frames and engines and exciting the interest of the general public, in short they created 'airmindedness by media exposure' to use present day terminology.

In 1930 Charles E Thompson, a Cleveland manufacturer of engine parts, donated the now famous Thompson Trophy, This he felt would help stimulate aircraft engine development in the United States which he felt was lagging behind the Europeans. The race was to be held over a 30 mile triangular course to provide more spectator appeal and there was to be no handicapping. This led to the development of several well known specials such as Folkert's 'Jupiter SK3', Roscoe Turner's 'Pesco Special' and Granville's 'Gee Bee R1' (Plan packs 2771, 2745 and 2789). The racing was fast, exciting, dangerous and sometimes fatal. It was always expensive. It always seemed to me that here were aircraft attached to engines. All racing was halted by WWII, but in 1946 restarted.

This time there were no specials, there were instead ex 'warbirds'. Surplus fighters at first stripped of everything moveable with boost pressures raised to levels which would make the engine designers curl up. But the quest for speed at all cost was now on again and it was the turn of the airframe designers to turn pale. Cockpit hoods became blisters then the saw came out for the wings, can you imagine a 38 ft span 'King Cobra' flying with wings trimmed to a mere 25 ft span? The air frames were filled and stopped and given a mirror finish which was then waxed.

Power was the key so the next logical step was inevitable, can you imagine a Rolls Royce 'Griffon 57' complete with 13 ft 8 in contra-rotating propeller being shovelled into a Mustang? Well it was and it cost $350,000 to do it. Or even a 25 cylinder R4360 - 4 'Wasp Major' developing 4000hp screwed to the front of a Corsair? Well it was. Cook Cleland won the 1947 Thompson Trophy at over 396 mph to win $19,000. The wheel had turned full circle, aircraft were being fixed to engines and the development costs were getting into the Military project level. Inevitably the number of racers dropped due to the sheer expense of these gas guzzling giants, a less expensive way of racing had to be found and so the AT6 Texan (Harvard) class was formed.

Then also as a logical progression it was decided that the key to cost lay in the engine so what was needed was a light cheap economical reliable engine around which a small racer could be built (this sounds familiar). So was born the Goodyear F1 racing class to use the flat four cylinder Continental engine. This was to have the minimum of allowable modifications which included replacing up to two of the pistons for balance and internal polishing. As this latter raised the output by 50% it must have been some metal polish!

The aircraft were small and nimble with well harmonised controls, what the races lacked in pure speed they gained in the excitement of close racing at low altitude. They were also affordable.

The 'Cassut' is but one of the more famous and successful of the breed, Its design philosophy is 'form follows function'. The low aspect ratio wings span 15 ft (yes both of them), while the tail plane spans are an even tinier 2 ft. The long moment arm gives this aircraft the required manoeuvrability and indeed, with its light wing loading and powerful engine, it can aerobat with the best, and as the airframe is stressed to 12G its a tough machine. It is a feasible 'home build' project and is popular as a sports aircraft and also a very much personalised design with wing thickness varying between 6% and 11% of the chord, and cockpit height given a 'pilot's' eye level plus 6 in. Wings and tail outlines are rounded or square cut while ailerons are narrow full span or part span.

The real aircraft is a mixture of wood and metal. The wing has a laminated wooden span 'D' section LE and welded tube ailerons. The fuselage has a basic welded tube structure so too has the tail assembly. Metal panels are confined to the rear top deckings, cockpit and engine bay and have simple curves. The compound curves on engine cowlings side cheeks and wheel pants are usually from GRP mouldings.

The whole design has an air of 'Pezazz' which is continued in the names given, 'Booray', 'Idjits Midget' and 'Scarab' are but a few. The colour schemes are equally up front, have a look in December 1969 Aeromodeller or get plan pack 2905 for suitable inspiration. The red and yellow brigade will find the Airmark 'Cassut' a gift and this can even be flown sans spinner and wheel pants.

However, remember the brighter colour schemes do give more visibility which is important for this small model and the wheel pants help you tell which way up it is (also important).

The Model: The outline has been drawn as accurately as possible. The scale of approximately 1-2/3 in to 1 foot was found to give a wing area of 200 sq in, which is in line with the American 1/2A racer class. The engine usually used is a Cox
TD .051 which is a 'goer', so 0.06 or 0.10 should be sufficient. 2 channel control on elevator and aileron is ample but a 225mAH battery is a must.

The original was fitted with 3 channel R/C equipment, a Fleet micro pack, the complete airborne pack weighs less than a 500mAh battery. If your gear won't fit, run out and get one of these it adds a new dimension to small models (and it's British).

With a total weight of 18 oz the prototype was below the minimum 20 oz of the class, the top weight of which is 30 oz.

Materials: Use light wood and don't beef it up. Get good fits and use glue sparingly. Avoid great blobs of PVA and epoxy. The airframe has been simplified to add lightness, don't reverse the process. Cover in coloured iron-on film also to avoid weight build up. Find light weight 1-3/4 in wheels, do not use those heavy 'spongies' in the scrap box.

The whole thing can be built from thre sheets of 3 x 1/16 in, two sheets 3 x 1/8 in and one sheet of 1/4 in (which must be soft). For stripwood you will need two off 3/16 square, one off 1/4 in square and a shaped TE. A visit to the scrap box should provide the rest. A 2 oz plastic fuel tank was used but the neck of the tank was heated wit the Solarfilm gun so that it could be shortened by approximately 3/8 in. I like to make up a kit before I start including the accessories.

Wings: So you've seen bigger tailplanes! Yes the wings are tiny but every effort should be made to build them true. First laminate the leading edge from 1/2 in and 3/8 in strips fror your 1/4 in sheet. Mark on the rib position then cut the slots for the ribs. Use two piece of hacksaw blade held or bolted togethe through the end holes. This will give a nice push fit for the wing ribs (three pieces will do the same for the two centre ribs). Cut two rib accurately then use these to draw the blank which are cut slightly oversize..." 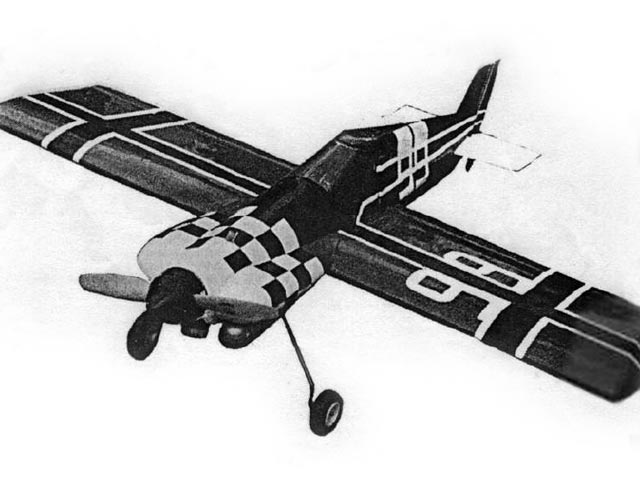 I built this in the early 90s with the recommended fleet gear and an OS 10 Max. Came out a bit heavy. Very red, very fast (especially landings) and very hairy! Would be a cracker with modern electrics and servos.
Nigel R - 07/06/2019
An especially interesting and well written article.
Miguel Morao - 07/06/2019
Add a comment