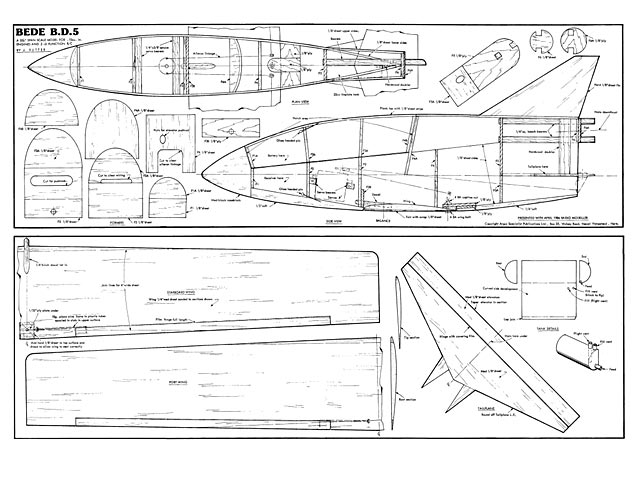 Quote: "The BD5 first caught my eye in an Aeroplane magazine of the early '70s. It struck me as a beautifully streamlined, but simple aircraft. I saw one (static, unfortunately) at the Farnborough airshow in 1978-80 but I didn't finally get the bit between my teeth until I bought a 1/72nd scale kit (all 3.6" span of it!) at a rally this year. By this time I had also become a fairly experienced R/C modeller, so I dusted off the TD .051 and got busy.

My models are invariably pretty simple to build so a week later it was ready to fly. I had one or two problems with it at first caused by that fat (for the size of model) fuselage and the high mounted engine. It was distinctly tricky to launch, the motor pushing the nose into the floor, so, rather than break it, I chucked it off the local cliffs! The problem became immediately apparent; the CG was too far aft. The other problem was tip stalling but twisted-in washout soon cured that. The model was now transformed into an exciting and acrobatic power/slope soarer depending on the strength or direction of the wind.

The only deviations from scale that I know about are that the motor fairing is a little fatter than it should be to hide the tank and the wing has 1/2" more chord to give a little more area. The real aircraft has strip ailerons and used a tail plus elevator set-up experimentally though it now has an all-moving tail.

Construction: The wing is made from a single piece of medium 1/4" balsa 4" wide or a combination of smaller pieces. I cut the outer parts of the taper off and glue them to the inner sections to make up the width. Once the blank has been produced, the underside of the outer 6in is carved and sanded to give washout before the normal section is carved in. This done, the wing is cut across the centre and the strip ailerons cut away. The wing can then be rejoined to give 3" dihedral under one tip. The aileron torque rods are 16 gauge piano wire bent to an 'L' shape and the torque arms are 16g brass tube. These are flattened at one end and drilled with l/16" holes to take metal clevises..." 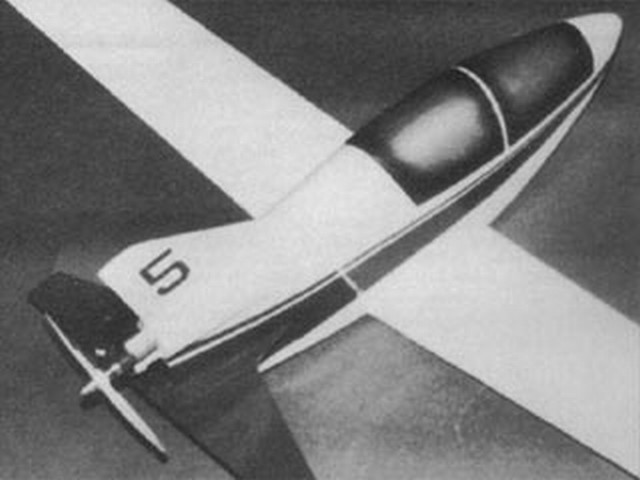