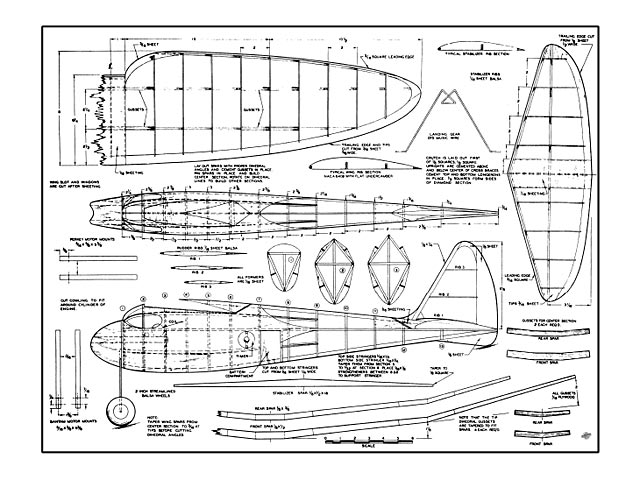 Quote: "Patriot by Gene Monat. An eye-appealing Class A that combines streamlining with simple-type modern construction.

LET it be easy to build, beautiful in appearance, and of good performance. This is the first prayer of the model builder who sits down to design his own model. The following is the story of one such prayer made into a reality by many long hours of sweating over a drafting board.

What tops everything is the fact that this model practically builds itself. It is simple, but without giving the appearance of a cumbersome 'box car'. The rectangular cross-section for fuselages and straight wings with chopped-off tips have seen their heyday. We have all built these barn doors at one time or another, but these are modern times! Today we think in terms of relatively high efficiencies; we look for better ways to streamline our models. Box-type jobs are simple to build, it is true, but the excessive drag that results takes a lot of the fun out of flying the ship. We define a simple model as that model which combines streamlining and up-to-date aerodynamic theory with the simplest of modern types of construction. And that is just how we define the Patriot.

The fuselage is built around the crutch, which acts as the main longitudinal stress. This type of construction allows for the neces-sary amount of 'give' that a body must have in order to withstand the abuse of constant flying under any conditions. For the sport flyer, this just fills the bill. It takes only a few nights to build the fuselage and there isn't any of this business of making minor repairs after each rough landing. You just pick 'er up and send 'er off again. The wing and tail are also plenty strong. As a matter of fact, on many occasions, when the ship had been retrieved from some of the trees that border our local flying field, the gang found to their amazement that the only damage suffered by the ship was a few holes where twigs had punctured the covering.

The real proof of the pudding lies in the flight characteristics of the job. It is not until the ship has been flown that one can really say that it is a proven design. For that reason, I think you should know about the Patriot's performance. Dependability is the first noteworthy distinction. Having probably flown some sensitive ships yourself, you surely know how important this is. Launching the Patriot is a pleasure. Not a single, worry in the world other than that of losing the job in a thermal. No sooner chi you take your hands off the ship than she starts her steep climb. She's off the ground in a hop and climbs in a wide circle to the right, completing only one circle in the whole period of climb. When the motor cuts, there is no stall of the type that you so often see as a model enters a glide. Instead, she continues on the level to follow through smoothly into a tighter circling glide which brings her back to earth.

Such outstanding performance is understandable when we analyze the aerodynamic set-up existing in this model. Proper arrangements of forces are solely responsible for the inherent stability. The attractive appearance is only the result of fitting pleasant curves around a proper' arrangement of forces. Even these pleasant curves are carefully planned from the streamlining angle. All forces center around the thrust line, with the center of gravity being directly on the thrust line. The center of lift is the only force location that is any real distance from the line of thrust. This is so because the model is of the cabin type and also for the reason that the Only way the center of lift could be located near the thrust line in cases where we have as much dihedral as we do in models, would be to make low-wing jobs..." 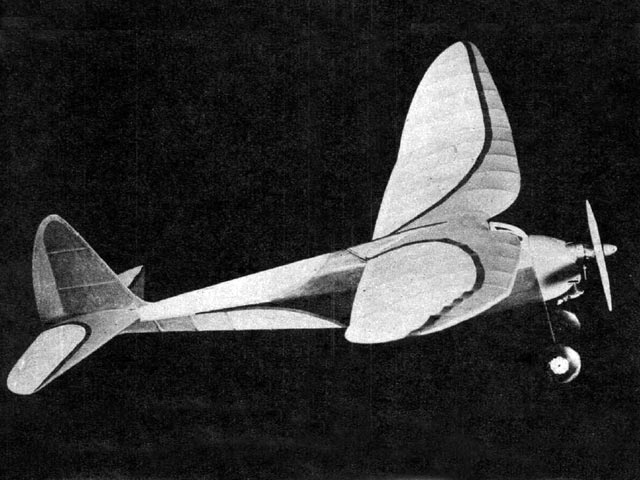